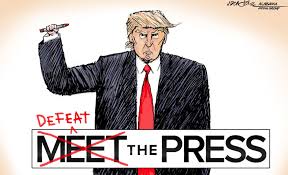 Trump is continuing a fight against easily verifiable data about the world. However, fact control is an insufficient antidote.

How are we supposed to know when we have finally entered the age of post-truth? One way could be to keep a lookout for the truth barometer. The media have already started to build one. When they are done, journalists will watch with delight over a powerful machine that analyzes statements trending in the public domain in real-time. In the wink of an eye it will make its judgement: “True!” or “False!”

The truth barometer, it will be claimed, protects us against collective misunderstandings and wicked propaganda. What it really does is to make for a uniform view of knowledge. The truth barometer will create a public dialogue where the world is described as either black or white, and in the end becomes incomprehensible. Everyone will be forced to take a stand for either one world view or the other.

Journalism aims to report on stories that are true and relevant. Checking the accuracy of information is part of the job description. But that fact control is short-circuiting is demonstrated clearly by the coverage of the Trump phenomenon.

We saw one example of this in Monday’s broadcast of “Actuellt” on SVT, when the Republican Jerry Cave was interviewed via a link. The result was a surreal tirade about all the success the new president has achieved in record time.*

To broadcast the interview in its entirety would be borderline unethical. An alternative would be not to transmit it at all. But the SVT correspondent Erika Bjerström instead prepared a fact control report, and after the interview she corrected two of the claims.

One of the corrections concerned the American people’s confidence in the media, which Cave described as misleading. The other concerned illegal immigrants, which, according to Cave, was costing California billions every year. Bjerström instead suggested the state was benefiting from immigration.

Later in the transmission, on SVT’s culture show, the background of the by now infamous Fox News report on immigration into Sweden was covered. Toward the end, viewers were informed of a fact review made about the documentary that was discussed in the United States.

Trump and his advisers have been heavily critical of the American media. Completely normal news reports have been described as “shameless lies,” and serious television networks described as “fake news.” The press has been described as the Trump administration’s real opposition. It is crazy, and dangerous, but is also important that the media is not tricked into joining this war on facts.

The New York Times now markets its subscriptions with the phrase “Truth. It’s grounded in facts”. Even though they unfortunately turned out to be toothless during the presidential campaign, there is a tendency even among Swedish media to put too much weight on fact control. The press has immediately started banging the drum when somebody in power has been caught misstating the truth.

There is, with the press, an over-confidence in its own ability to crush false claims. How much does the economy of California win or lose on the backs of illegal immigrants? The question can be answered, but without real nuance. A reporter operating under the belief that he can correct a statement with 100 percent certainty has fallen into the trap, and into the role of the opposition. The neck is exposed, since reality can often show itself to be more complicated than it first appeared. There is hardly anything worse than poor fact control.

At the same time, there is a risk that the investigation may turn into violent entertainment, a spectacle aimed to appeal to one side of a tribal war. It is not a coincidence that Trump is throwing around accusations of “fake news.” He knows it will annoy and polarize.

Trump’s opponents must therefore protect both the truth and the various shades of grey. There are topics that can be treated categorically. Lies exist and need to be challenged. However, the media need to do so in a nonpartisan way, and with precision, while at the same time keeping in mind that science isn’t a finished project. Statistics are incomplete and sometimes incorrect.

Our knowledge of the world is gradually being enhanced. Some of the things we believed to be true yesterday have been proven to be false. This doesn’t mean that truth doesn’t exist or that it is relative — which would suit a bully like Donald Trump — it just means that it should be fixed with a degree of modesty.

Trump is forcing the media to build a truth barometer. However, insisting on absolute confidence in the accuracy of information jeopardizes something valuable. What should we call it? Good conversation perhaps.