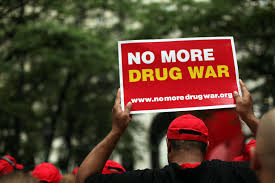 In the xenophobic and racist view of the president of the United States, Donald Trump, all evil comes from outside the country: immigrants, terrorists, imports and, obviously, drugs.

There is nothing new about this tendency for large social and political sectors in the United States to blame drug-producing and drug-transporting nations, like Mexico and Colombia, for the serious drug addiction problems in that country. However, with someone like Trump in the White House, that tendency will no doubt worsen.

This is what Colombian security officials think. They have also seen hints that Attorney General Jeff Sessions and Vice President Mike Pence, two ultra-conservative “hawks,” will be key players in the Trump administration’s anti-drug policy.

Pence is a supporter of the 1980s and ’90s-style “war against drugs,” and of giving more power to the agencies involved in it. As governor of Indiana, the vice president increased penalties for drug trafficking; as a legislator, he supported stationing military personnel on the borders to support the fight against drug trafficking.

And Attorney General Jeff Sessions, who thinks that “good people don’t smoke marijuana,” is convinced that the “unprecedented epidemic” of heroin and opioid abuse in the United States is causing an increase in violent crime in the United States. That is why last Wednesday, at an event with law enforcement officials, he said that a return to a policy of tough and professional law enforcement is required.

“Last month the president gave us clear direction, issuing three executive orders that direct the federal government to reduce crime and restore public safety,” Sessions added. He even said that he supports reviving the “Just Say No” campaign launched in the 1980s by then First Lady Nancy Reagan, which was replicated in Latin America as “Di no a las drogas.” (“Say no to drugs.”)

In addition to being obsolete, this campaign is a symbol of the failed “war on drugs” proclaimed in 1971 by Richard Nixon, then U.S. president. Not only did this campaign fail in its attempt to reduce addiction in that country and the rest of the world, it also created havoc in poor communities in large U.S. cities and an explosion of violence in countries like Colombia, Mexico, Guatemala, Honduras and El Salvador.

In this “war on drugs” rerun that Trump’s team of “hawks” is pushing from Washington – where recreational marijuana use is legal – it is precisely the Latin American countries that are being called on to suffer the consequences.

In the report on drugs released in Washington on March 2 by the State Department, Mexico is named as the primary avenue for the transportation of South American cocaine and synthetic drugs, and as the country of origin for between 90 and 94 percent of the heroin consumed in the United States.

And this comes at a time when the United States is living through its worst crisis in addiction to heroin and other opioids in more than 60 years.

Colombia produces 90 percent of the cocaine consumed in the United States. According to the report, coca leaf production there increased by 42 percent in 2015 compared to the previous year.

Gen. Barry McCaffrey, who was the drug czar for President Bill Clinton (1996-2001), told the Colombian daily, El Tiempo, that the Trump administration will see this as a threat to national security and will make a decision that will complicate matters.

He pointed out that one measure could be the suspension of U.S. aid to Colombia for combating drug trafficking.

Colombian officials interviewed by Proceso definitely expect more pressure from the United States to resume spraying of coca leaf fields with glyphosate. Spraying was suspended in 2015 after a report from the World Health Organization listed this herbicide as a potential carcinogen.

But these same sources think that even with all the pressure that a powerful country like the United States can bring to bear, Trump’s isolationist policies will make it difficult for those in power in Latin America to implement Washington’s guidelines for combating the production and trafficking of drugs.

Last Thursday, the budget proposal that Trump sent to Congress projected a 30 percent cut in international aid programs, which are an important part of the anti-drug fight in Colombia.

Through “Plan Colombia,” the country received $10 billion between 2000 and 2016 to combat production and processing of coca leaf and cocaine

And the Colombian government had agreed last year with then President Barack Obama to redirect that aid to programs that support the implementation of the peace accords with the FARC guerillas, particularly in substituting other crops for illegal ones currently under cultivation. For this, Obama promised an initial package of $450 million, now in doubt in light of the cuts Trump has proposed to Congress.

“The ability of the United States to apply pressure is still great, but a reduction in economic aid would reduce that ability,” one of the sources consulted said.

In the case of Mexico, its cooperation with the United States on security and drug trafficking matters has been conditioned by the close commercial ties between the two countries. If this turns into a dispute and a point of contention, as Trump would like, Mexican collaboration in these areas could also be modified to be more in line with Mexico’s interests.

About Tom Walker 215 Articles
Before I started working as a translator, I had had a long career as a geologist and hydrologist, during the course of which I had the opportunity to work on projects in Mexico, Chile, and Peru. To facilitate my career transition, I completed the Certificate in Spanish-English Translation from the University of California at San Diego. Most of my translation work is in the areas of civil engineering & geology, and medicine & medical insurance. However, I also try to be aware of what’s going on in the world around me, so my translations of current affairs pieces for WA fit right in. I also play piano in a 17-piece jazz big band.