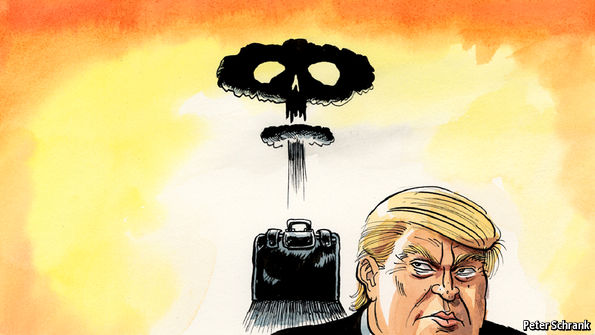 Meeting in Moscow with U.S. Secretary of State Rex Tillerson, Russian Foreign Minister Sergey Lavrov expressed concern about the contradictory statements President Donald Trump and his circle have made in recent months on key international issues: “I won’t hide the fact that we have quite a few questions in light of the highly ambiguous, sometimes contradictory ideas that have been expressed in Washington on the entire range of bilateral and multilateral affairs,” he said.

The latest evidence of the lack of a clear position was Trump’s statement that NATO is no longer an obsolete organization, which is how he described the alliance back in January because of its failure to prevent terrorist attacks and its creation “many, many years ago.” As for Syria, within the span of just one week, Trump and his team did a sharp pirouette — from statements that Bashar Assad could stay in power to comparing the Syrian president to an animal and carrying out strikes against his air force.

The missile attack on the Syrian air base demonstrated a new model of American foreign policy. Trump isn’t Obama, who consulted with Congress, debated, sparred at the U.N. Security Council through his ambassadors, and in the end, didn’t take a chance on any drastic actions, much less adventures. Trump, by all appearances, is prepared to act differently, to use unilateral coercive methods, disregarding the United Nations.

Put simply, Trump may be a match for his Republican predecessor George W. Bush, who dreamed of taking action against the “axis of evil” and unleashed a war in Iraq, something the incumbent U.S. president has called a “big mistake.” By Time magazine’s count, Trump tweeted at least 18 times about the impermissibility of carrying out strikes against Syria and even called on Obama not to intervene in the Syrian crisis.

He’s lurched from one extreme to the other, without thinking about the fact that destroying Syrian aircraft would affect the fight against the Islamic State (banned in Russia) and other terrorist groups, even though it was precisely the eradication of “Islamism” in the Middle East that Trump called his top priority in foreign policy not that long ago.

At this point, there’s no clear answer to the question of why Trump changed “America First,” his campaign’s political credo, to “America Everywhere.” Some observers figure it came about under the influence of his daughter, Ivanka, an unpaid adviser to the president. Others see it as a domestic political diversion through which Trump purportedly wanted to show that Russia isn’t influencing his choice of goals, and that the contacts with Moscow by members of his team were quite innocent, particularly since the president’s son, Eric, believes that the strike on the Syrian airbase ought to have shown that Trump isn’t in league with Vladimir Putin and won’t let the Kremlin tell him what to do. “If they disrespect us and if they cross us, fine. There will be no one harder — [my father] has got more backbone than anybody,” the media quotes the White House boss’ son as saying.

However, it’s now clear that with such a U.S. president, the world must be as vigilant as possible; under him, the risk of a major war, including nuclear war, has increased. His foreign policy amounts to a set of unpredictable and ill-considered actions. Under the influence of Trump’s emotions, anything is possible. If the situation on the Korean Peninsula today is just as explosive as the situation in the Middle East, why not, after attacking a Syrian airfield with 59 Tomahawk missiles, the nuclear-powered aircraft carrier USS Carl Vinson, with nearly 6,000 sailors and 70 fighter jets on board, into Northeast Asia, especially since Trump has already warned several times that the North Korean problem can be solved by him alone?