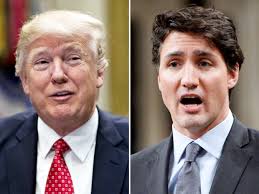 It’s the end of “minor adjustments,” reassuring words perceived to be spoken by Donald Trump after Justin Trudeau’s visit to Washington in February. It’s also the end of the “model” trade relationship a Trump emissary boasted of during a Cabinet meeting in Calgary a few weeks earlier.

After a week of resounding and rather drastic statements from Trump about the Canadian dairy sector, softwood lumber and even energy, the first concrete restrictions have been directed at Canada.

On all these fronts, Trudeau’s government has been laying the groundwork for weeks with various missions, meetings and campaigns, aimed at Washington and toward individual states who are seen as potential allies. These efforts seem to have been in vain, but it’s not clear the price to be paid will be all that heavy.

Many Canadian stakeholders in the United States and other experts have played down the most virulent statements from last week, such as when the president characterized Canada’s actions toward U.S. farmers as a “disgrace.”

This may be a simple “tirade,” typical of Trump-the-negotiator in opening remarks. Members of Trudeau’s team have kept calm, avoiding directly undercutting the American president’s argument – or the lack thereof.

Is this Trump’s negotiating tactic? Or is it a diversion at a time when his government is arriving with a mixed record at the milestone of his first 100 days?

It’s probably both, when you take into account the character you’re dealing with.

It’s a diversion orchestrated by the American president that the Trudeau government could well benefit from in the current Canadian political context.

Trudeau and his troops have effectively lost momentum since the beginning of the year. Campaign promises abandoned and distorted, a budget without an immediate impact, and embarrassing controversies have all clouded the sunny skies of the liberal government.

Electoral reform is at the top of the list of unfulfilled commitments, but the omnibus budget plan, the attempts to muzzle members of Parliament, the halting reform of access to information and the odd independence accorded to the Parliamentary budget director can’t be neglected. The failure – to put it lightly – of the Phoenix payroll system* and the prime minister’s vacation with the Aga Khan have fueled attacks from the opposition as well as a certain cynicism from voters.

In such a context, what better way to rally the troops behind the government than a trade “aggression” led by a leader who earns little sympathy from Canadians? Trudeau speaks of a strong defense of Canadian interests, but still insists on respectful discussion, leaving the qualifiers and superlatives to his American counterpart.

His political opponents find themselves in a delicate position. Maxime Bernier agreed with Trump on supply management in Canada, but Canadians, regardless of their political allegiance, are overwhelmingly satisfied with the Canadian dairy sector.

His acting boss, Rona Ambrose, pleaded in a letter to Trudeau for nonpartisan assistance with respect to Trump.** She recently returned from Washington saying that she could reassure the business community of the importance of a Canada-U.S. economic relationship with the Trump administration. But this occurred after discussions with Wilbur Ross, who put in place the import tariffs on wood!

Thomas Mulcair called for an end to “backing up” to the “bully” and said we must “push back.”*** By doing what exactly? Through an information campaign in the U.S. on American interests! Everyone knows it is difficult to do more than what the Trudeau government is already doing in this area.

Pierre Elliott Trudeau told Americans that being their neighbor “is in some ways like sleeping with an elephant. No matter how friendly and even-tempered is the beast … one is affected by every twitch and grunt.”

His son is now coming to this concrete realization, but the fact that the elephant has the head of Donald Trump could give him some respite. As an example, consider the dairy trade: the respondents of an Abacus poll were all much more likely to resist American requests when informed that it was Trump who made them. Add to this negative perception the numerous somersaults and flip-flops of Trump’s government, and Trudeau’s government gives off the relative impression of consistency in comparison. This diverts attention from the hot issues already on the fire, as well as important but forgotten imminent reforms: defense policy and national security.

*Editor’s note: The reference to the Phoenix payroll system concerns a payroll system inaugurated by the Canadian government earlier this year, which malfunctioned and affected pay to tens of thousands of Canadian public servants.

**Editor’s note: Maxime Bernier is a Canadian businessman, lawyer and member of Canadian Parliament. Rona Ambrose is a Canadian politician who is the interim leader of both the Conservative Party and the Official Opposition.

***Editor’s note: Thomas Mulcair is a Canadian politician who leads the New Democratic Party of Canada.