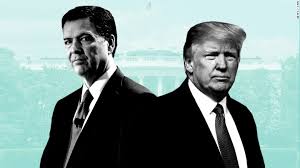 The debasement of the U.S. justice system, an unprecedented attack on democratic institutions, abuse of power… the tempest that Donald Trump has unleashed with his dismissal of FBI Director James Comey is serious and “Nixonian.” And it is the result of political awkwardness, signaling a dangerous authoritarian skid, where Trump will find that suspicions of electoral collusion with Russia are more firmly entrenched against him than ever.

It is ironic that the man Donald Trump just chased out of the FBI is both the one who helped him become president of the United States as well as the one who potentially threatens the future of his presidency. Remarks Tuesday morning in The New York Times say the same thing about Comey’s dismissal under a remarkably false pretext — namely, that he was dismissed by the White House for his mismanagement of the investigation into Hillary Clinton’s use of a private email server when she was secretary of state.

This pretext is the grossest misappropriation of truth. And Trump is ridiculous for thinking even for a moment that the American people would swallow this lie – apart from commentators at Fox News and his most devoted followers – because it is clear that Comey was dismissed because he was actively pursuing an investigation into Russian interference in the last U.S. presidential election, as well as suspected collusion between Russian authorities and Trump’s campaign team, if not Trump himself, to hurt the Democratic candidate.

With Trump’s decision to fire Mr. Comey, we can now accuse Trump of having something to hide. We already suspected that the president was not the finest of politicians. Comey’s lack of judgment was also well known, given that he twice publicly intervened during the campaign to comment on Clinton’s email investigation. Nevertheless, candidate Trump found the FBI director very useful during the election, when, 11 days prior to the vote, on Oct. 28, Comey announced that he was reopening the Clinton investigation. Many Democrats correctly believed that this maneuver, so close to Election Day, would discredit Clinton and hand Trump the win.

This dismissal is all the more interesting politically in that it was recommended to the president by Attorney General Jeff Sessions, who had recused himself in March from the Russia investigation after it came to light that he had not disclosed in his confirmation hearings that he had twice met the Russian ambassador to the U.S. during the campaign. This contributes to the growing impression that, at the highest echelons of power, a calculated plan exists to prevent facts from coming to light.

The dismissal will not stifle debate. On the contrary, it will probably amplify it. The loyal man that Trump will place at the head of the FBI will surely fan the flames. Calls for the appointment of an independent counsel will increase. The Senate inquiry will stay the course – provided, however, that Republicans fulfill their responsibilities.

Is this a crisis of Watergate proportions? It is “Nixonion,” at any rate, because of the parallel it evokes with the October 1973 dismissal of special prosecutor Archibald Cox by Richard Nixon. This one may be even more profound, given Trump’s blatant contempt for democratic norms and for all those who dare stand in his way.