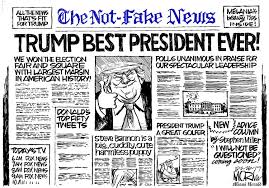 The president’s war against the press makes massive use of provocation and even a potential gag law.

It was vital for his very survival. Every day from 6 a.m. to 7 a.m., Donald Trump would dedicate time to digesting the news. He would scour the papers in search of both his own name and those of his companies. He sought out the names of his enemies. He pursued business opportunities. Apparently, a mention in The New York Times was seen as glory. For good or bad, as he would write years later, appearing in the press became vital. Sometimes, so desperate did he become that he himself would call the papers and, in the guise of one of his own nonexistent spokespeople, give juicy details about his supposed relationships with artists like Madonna, Kim Bassinger or Carla Bruni. “Carla has dropped Mick Jagger for Donald,” he told a journalist from People magazine.

It was all lies. Fake news. Bruni and Trump had seen each other for barely a few minutes, but that didn’t matter. He was the Trump of the 80s. Effervescent and golden. A millionaire who sought, above all else, social success. Thirty years later, some things have changed and some have not.

With time, his ambition drifted from TV to politics. The fight transformed him. His biographers all agree that he never lost his addiction to the press, but it mutated and he became an avid consumer of extreme and sensationalist press. “As president he still gets his information from such untrustworthy websites like Infowars and Breitbart,” explains Pulitzer Prize winner and presidential investigator Daniel Cay Johnston.*

Conversely, his attitude toward journalists was also in flux. As he gained fame, he no longer asked the press for favors; rather, his aim was to tame them, to crush them. Upon arrival at the White House he took this to new levels, beginning the greatest battle ever waged by a president of the United States against the media. “There is no comparison. He fears being discredited so much that, in order to prevent his followers from believing those who criticize him, he has started this attack,” explains Peter Beinart, analyst and professor at The City University of New York.*

This assault will go down in history. The New York Times, The Washington Post, The Wall Street Journal, CNN, the BBC – the top brass of the world of journalism – all find themselves in the line of fire. Trump pours scorn on them. He describes their exclusives as “fake news” and has declared them “enemies of the people.” “They don’t tell the truth, they don’t speak for the people but for outside interests,” Trump says.*

The attack isn’t a result of Trump’s mercurial character, as some believe, but rather it forms part of a long-term strategy. His adviser, Steve Bannon, has explained the strategy, describing the media as the main “opposition party.” The aim is to isolate them, to destroy their credibility, to castrate them.

In order to do this, the president is attempting to wear the media down. He turned his back on the White House correspondents’ dinner, something that has not happened since 1981, after Ronald Reagan had been shot. He frantically tweets about critical media outlets, be it for their “fake” coverage of his health care reform or their investigations into the Russia story. At every rally, he goes after them. His most recent attack came in the form of changes to libel laws. In a country that adopted the First Amendment in 1791, Trump has set rumors running wild that he wants to create a law to speed up lawsuits against the press. “If the press writes something bad, it must retract it, and if not, they must be judged,”* he has said.

It’s nearly impossible, experts say, that such a measure could actually come into being in the United States, and even less likely that it would get past the Supreme Court. But the threat is not intended to end in legal reform; its aim is different – one that is much more useful politically.

Trump is the president of a divided America. He received nearly 3 million fewer votes than Hillary Clinton and his victory came down to a large turnout of the white working class in key areas: a group which has extreme faith in him and who distrusts the aforementioned publications. It is to this group that the president speaks, and he does it extremely successfully. “Trump knows that the people who voted for him are wary and prefer to get their information from Fox and other right-wing sources. By attacking the mainstream media, he is able to reconnect with his base. This polarization gives life to misinformation,” states Shanto Iyengar, professor of political science at Stanford.*

For his voters, what journalists have to say matters little. In their eyes Trump is completely trustworthy and honest. A recent survey by The Washington Post and ABC found that 76 percent of those who voted for him believe that the president doesn’t lie. Conversely, 78 percent are convinced that the media regularly publish false stories, and 80 percent of them believe that this represents a grave problem; many more than those who would say the same of Trump – 3 percent.

“His voters want to believe that he is decent and capable and when information that suggested otherwise is published they refuse to accept it and prefer to consider it fake news. This same reason explains why so many Republicans claimed that Obama was a Muslim and why an even greater number of Democrats believed that Mitt Romney didn’t pay taxes,” explains Iyengar.*

The conclusion is clear. The mainstream media are losing the war with those who voted for the president, but the consequences of defeat are only so damaging. “Among those who support the president, Trump may do well, but he has not been able to expand his base and his general popularity is low,” states professor Beinart. Concludes Iyengar, “Furthermore, his message isn’t landing with independents, 60 percent of whom disapprove of Trump. If he continues to attack the media, he will be digging his own grave.”*

The knives are out and the media are not giving up. At an electrifying pace, and more zealously than ever, they continue their investigations. Every day they reveal the lies and half-truths of the president; in the first 100 days of his presidency, The Washington Post has counted 492.

Trump, for his part, continues to fire off shots left, right and center. He insults, attacks and then insults again. His objective, for the moment, is to maintain his current voter base. No other noise matters to him. Quite the opposite. As he said in one of his first battles with the press, back in the golden days of the 80s: “Controversy sells.”