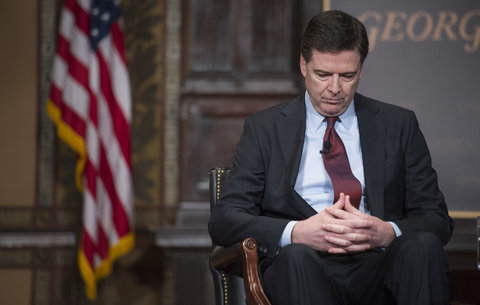 Awkward dismissal of James Comey may lead to the Congressional appointment of a special commission that will investigate the links between Trump’s surroundings and Moscow.

Donald Trump made another unexpected decision — he dismissed Director of the Federal Bureau of Investigation James Comey. Comey himself found out about it during his speech to employees at the regional office in Los Angeles, when the urgent news about his dismissal appeared on TV, which at first he considered to be a joke.

Up until now, the only director of the FBI ever dismissed from his post was William Sessions. This happened in 1993, but then it was about the misuse of budget funds.

Trump’s administration stated that the reason for the dismissal was Comey having exceeded the level of permissible publicity in the investigation of Hillary Clinton’s hacked electronic correspondence case. However, during the election campaign, Trump complimented Comey for the publicity of the investigation process. That’s exactly why Democrats wisely emphasize that Trump should have dismissed the director of the FBI three months ago and not right after his last speech in Congress, where he was talking about the appearance of a “Russian trace” within the framework of the investigation. Moreover, he created a special FBI division that is dedicated only to this part of the investigation and requested additional financing from Congress.

Adam Schiff, a senior Democrat on the House Committee on Intelligence, said, “The decision by a president whose campaign associates are under investigation by the FBI for collusion with Russia to fire the man overseeing that investigation, upon the recommendation of an attorney general who has recused himself from that investigation, raises profound questions about whether the White House is brazenly interfering in a criminal matter.” Indeed, Sessions announced this decision to recuse himself after it became known that he lied at the Senate hearings about the lack of contacts with Russian officials.

Richard Burr, chairman of the Senate Intelligence Committee, said he was “troubled by the timing and reasoning of Director Comey’s termination … and his dismissal further confuses an already difficult investigation by the Committee.” By Thursday, May 11, seven Republicans had already expressed dissatisfaction with Comey’s dismissal.

Disagreements with the Authorities

At the time of his dismissal, Comey had been in charge of the FBI for four years, although usually a director is appointed for a 10-year term. It’s known that subordinates respected Comey, including his independence.

For example, at a recent hearing in Congress speaking in opposition to the current U.S. president, Comey said that he “found no information confirming tweets” from Trump saying that Barack Obama wiretapped him.

Comey earned his reputation as a totally independent person in March 2004, when he was acting as the U.S. attorney general while Attorney General John Ashcroft was in the hospital. At that time, there was a discussion about extending the secret wiretapping program; Comey came to the conclusion that one of its components was illegal, and refused to approve its extension. Alberto Gonzales, White House general counsel, went to see Ashcroft in the hospital, but Ashcroft backed Comey’s decision. George W. Bush’s administration tried to extend the program, ignoring the position of the Justice Department, but Comey threatened to resign and create a scandal. The presidential administration backed away. For a short time, the wiretapping program was suspended, but it was extended later, based on other legal grounds.

Technically Comey had indeed broken the Justice Department’s rule forbidding public discussion of current investigations. Hillary Clinton even stated that Comey’s decision to inform Congress about her email correspondence not long before the election cost her the White House.

At the same time, a couple of days before the election, Comey again publicly informed Congress about the investigation process and stated that no new secret data had been found in the correspondence and it was impossible to indict Clinton for the improper handling of classified information.

However, Bill Clinton himself did a disservice to his wife when he met with U.S. Attorney General Loretta Lynch, which in due time caused a storm in the media. Usually, the decision to file criminal charges is made by the Justice Department, but after this scandal, Lynch declared that she was withdrawing herself and said that she trusted Comey’s professionalism. This was precisely one of the main reasons why Comey actively commented on the progress of the investigation regarding Hillary Clinton and her treatment of classified information.

This awkward dismissal of Comey gives another trump to those American politicians who require an independent investigation into the links between Trump’s campaign headquarters and Moscow. This increases the probability that the investigation may be dealt with by a specially created independent commission of Congress—similar to the Sept. 9, 2001 commission that investigated the 9/11 terrorist acts—or a specially appointed independent prosecutor with virtually unlimited resources. If earlier it was the Democrats who spoke for such measures, now you can hear the same from representatives of the majority party.

Among them, for example, are Rep. Justin Amash, a Republican from Michigan, and Republican Sen. John McCain of Arizona, who called for “forming a select committee on Sunday to investigate Russian interference in the 2016 election.” It seems to be a good time to recall the independent prosecutor Kenneth Starr, who gave Bill Clinton, a hard time investigating his lies to Congress about an affair with Monica Lewinsky.