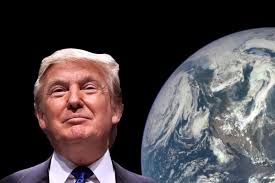 Following Donald Trump’s triumph in the presidential election, I said in this column that fulfilling his campaign promises on climate change will make him an enemy of the planet (Nov. 13, 2016). Well, it seems he is achieving it with the withdrawal of the U.S. in the Paris agreement, a decision that was preceded by other measures to stimulate the exploitation and consumption of fossil fuels.

Ultimately, the withdrawal from the agreement will not lead the United States to inaction since, as President Obama pointed out, a broad set of states, cities and private sector businesses already opted for a future with fewer carbon emissions. For example, in California, Governor Jerry Brown of the Democratic Party announced months ago that he will strengthen the policies for combating climate change, which, in California, are already the most advanced in the United States. In principle, he proposes taking the required measures for reducing emissions and by 2030 making them 40 percent below the levels recorded in 1990. Furthermore, after the announcement by Trump, 68 city mayors in the U.S. committed to combating climate change, and with a population of 36 million people, stated that they will further align their policies with the Paris agreement.

Moreover, there are impressive technological advances to mitigate climate change. According to a study by Bloomberg New Energy Finance, in the next decade, electric vehicles will become the more economical option in almost every country, as compared to vehicles with internal combustion engines. Equally encouraging is the announcement by India that it already has the capacity to produce 1 kilowatt an hour of energy with solar panels, which is a lower cost than coal-powered generation.

In other words, the world is not confronting a fiasco with the Paris agreement similar to the fiasco with the Kyoto Protocol, whose modest results were mainly due to the non-ratification of the United States. But the fact is that the existence of some light cannot hide the many shadows that Trump’s announcement casts on the future of the Paris agreement and international politics.

Trump, with his decision, and in spite the positive trends noted above for the United States, risks placing the world on the path of transgressing the 2 degrees Celsius increase of global temperature, beyond which the world runs enormous economic and social risks.

Trump, with his decision, would have the United States give up on leading the task of fighting the greatest threat humanity has faced in its history. How can you have faith in a country that, after roughly eight years of playing a definitive leading role in the construction of a complex agreement signed by 195 countries, resolves to withdraw from it with weak and laughable arguments and becomes an “associate” of Syria and Nicaragua, the only two countries of the world that didn’t sign it?

Trump, with his decision, has signaled that the United States will not contribute to securing the economic resources that developing countries, especially the poorest, require as a necessary complement to meet their goals of reducing greenhouse gas emissions and adapting to climate change – a fact which could negatively affect the fulfillment of their commitments under the Paris agreements.

Fortunately, the die is not cast. Formally, the United States will only be able to complete its withdrawal at the end of President’s Trump’s term, which will lead to climate change playing, as never before, a central position in the 2020 presidential campaign. More important still: The social movements that support the Paris agreement, in the United States and around the world, will most likely emerge with sufficient force to scale back or substantially modify the announcement of this pathetic enemy of the planet.