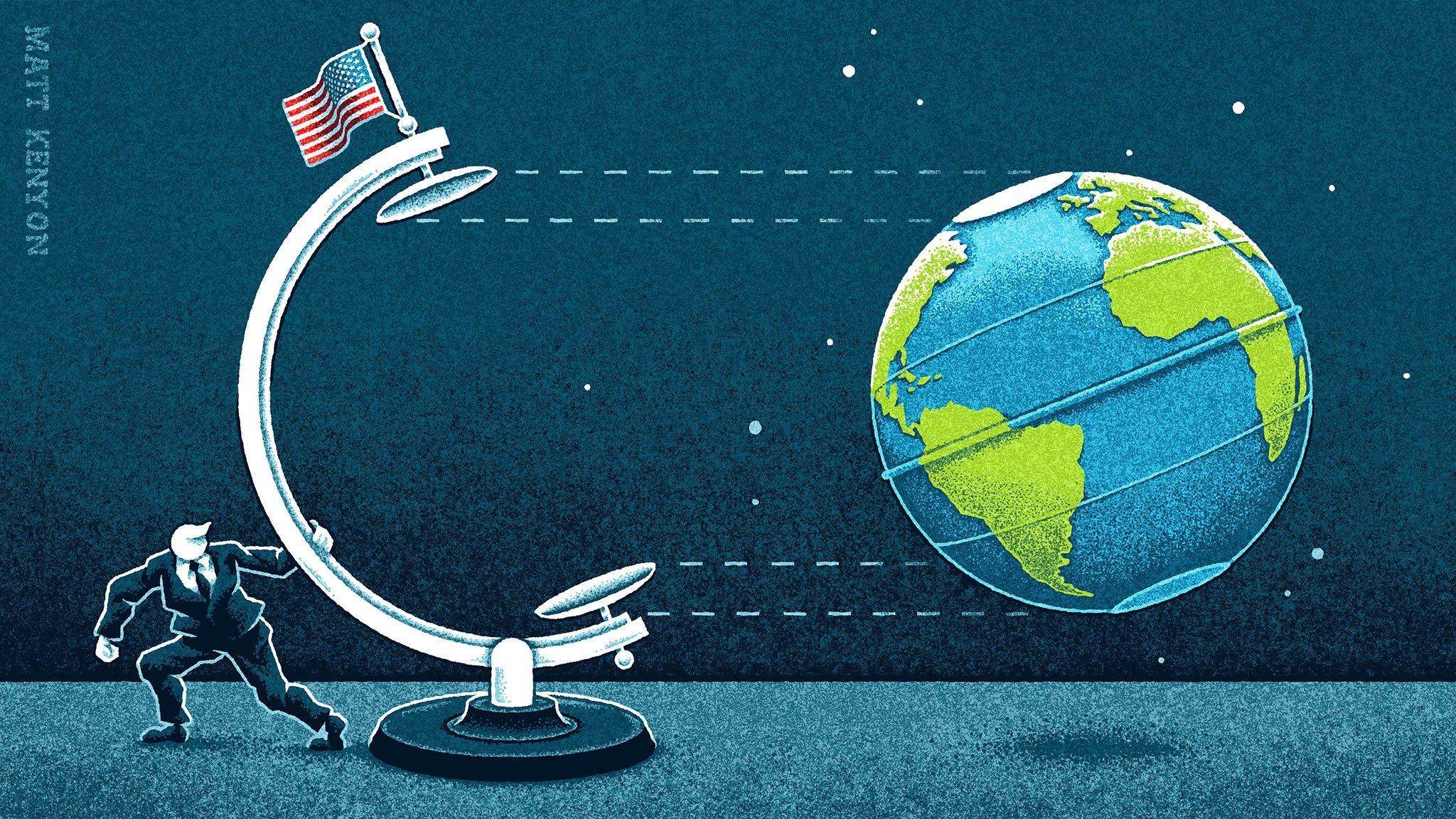 While the U.S. continued its refusal to accept Middle Eastern refugees, and after withdrawing from the Trans-Pacific Partnership on June 1, President Trump formally announced that the United States would withdraw from the Paris climate agreement. Taking this series of events together, the U.S. plan of action is extremely clear: America is firmly heading toward “America First,” which should be understood as putting the American country first.

Many people say that Trump is making the U.S. an enemy of the world, but this is not necessarily true. Trump’s winning the election was just a reflection of the popular will of the U.S. at the time of the election. Within American society, there truly exists a very popular sentiment that necessitated the “America First” platform; objectively, people felt the U.S. had no time to be concerned about the problems of others, while subjectively, they had lost the desire to support the U.S. continuing to be the world’s policeman and a leader of values and ideas. Trump accurately seized upon this sentiment and put a lot of weight on it in his campaign.

Long-term stability has led people to mistakenly assume that the global order we have now is the natural and inevitable state of affairs. In reality, we might be witnessing the end of the U.S. world order. Many seemingly isolated events are actually just an outward reflection of the world of inner structural change. The world is returning to its original shape. In contrast to the opinions of others, this author does not think that new mighty states are replacing the old ones – the U.S. is still at present one of the great world powers – but simply that the influence of world powers has shrunk to extend only over isolated regions.

This change began within the Muslim world. The whole arid region from Central Asia and the Middle East all the way to North Africa, located at the center of the great lands of Europe, Asia, and North Africa, and subject to similar environmental conditions and external pressures, has been a battleground in the games world powers have played among themselves already for 100 years. In 1979, the Iranian Revolution overthrew the secular pro-U.S. and pro-Europe regime. At the same time, the strength of Afghan weaponry helped it to resist invasion from the U.S.S.R. In accordance with Cold War mentality, the U.S. continued to indirectly intervene by means of supporting its representatives in the resistance. This led to a series of huge social changes. After the Cold War ended, the situation took a turn for the worse. The strength of deeply-rooted religious feeling among the public gradually but ultimately regained influence, once more becoming the key political force of the region. This led to the U.S. launching its war on terrorism in order to directly interfere with, and overthrow, oppressive religious, military and strongman political regimes. This in turn destabilized the entire situation, as a single spark can start a prairie fire; once ignited, the flame could not be controlled.

On the other hand, in May 1989, Hungary, one of the earliest fronts of the Cold War confrontations, decided to dismantle the barbed wire-fortified fence that had divided its border with Austria for 40 years. In September of the same year, it advanced another step by announcing that it was opening its borders, becoming a shortcut for people living in East Germany at the time to flock to West Germany in order to apply for refugee protection. This single opening in the Iron Curtain gave way to a series of gradual transformations with which readers will already be familiar: the collapse of the Berlin Wall, the election in East Germany, and the unification of Germany, all of which triggered the disintegration of the dying Soviet Union and the end of the Cold War.

As though a letter’s seal had been suddenly removed from all of Eastern Europe, originally part of the Iron Curtain, it completed its integration with Western Europe almost immediately on the heels of the disintegration of the U.S.S.R. This phenomenon demonstrated the large-scale eastward expansion of the European Union. At the same time that the European Union was obtaining autonomy independent from American politics and economics, its influence – the specifications and development of which were still in formation as the financial market expanded in scope – already was enough to rival that of the United States.

These sudden changes in the European Union riled the sensitive nerves of Russia and England until Ukraine started to consider entering the European Union, when Russia was finally moved to violent intervention, undertaking the annexation of Crimea. This incident also catalyzed Britain’s citizen referendum to withdraw from the European Union, choosing to maintain its long history of pursuing autonomy.

On the other side of the world where Africa, Europe, and Asia converge, mainland China, which at the time had recently deadlocked on reform, was deeply shocked by the sudden disintegration of the Soviet Union, which shared the same communist political structure as itself. Deng Xiaoping thus decided to even more deeply commit to the opening and reform of China. After Deng’s famous southern tour in 1992, by shaping public opinion and regional government support, the Chinese mainland finally once more established itself as being on track for development that prioritized its economy. Today, it has almost returned to its original level of influence, becoming a main trade partner as well as strategic rival of the United States.

The high-speed expansion of the Chinese mainland’s comprehensive strength has created huge pressure in neighboring Japan and the countries of Southeast Asia. Feeling threatened has led to a collective feeling of impending crisis in Japanese society. It is now quietly pushing to break free from the shackles imposed on it by the United States after World War II and gradually return to autonomy, which has existed in name only there for many years, while the U.S. finds Japan difficult to totally suppress. Meanwhile the nations of Southeast Asia bordering the South China Sea, quiet for dozens of years, have now started to make their voices heard.

The United States is a strong naval power; it has the military might to subvert and overthrow the ruling classes of specific countries. However, it does not possess the ability to intervene in the development of societal foundations. It is as though the U.S. government has not yet realized that in publicizing the results of its war on terror, it tends to emphasize the leaders of various organizations whom it has already killed. In reality, since these organizations are fully developed, they could obviously just continue to produce new leaders. Furthermore, it is precisely killing off the old ones that accelerates the optimization of the qualities of leaders of these countries or organizations. A case could be made, however thin, that though controversial, the war in Afghanistan – the first stage of the war on terror – was one of the viable options for a defensive counterattack. When it rushed to send troops to Iraq, though, it was clear that this was actually a selfish act of invasion wrapped in the guise of a war against terrorists. This action led to a feeling of impending crisis shared among the people who form the societal foundations of the entire Middle Eastern and North African regions.

These contemporary threads of development are not exceptional, but rather form a pattern that has historically been repeated time and time again. In essence, they all result from the power of integration and autonomy. The trend toward integration and the push to uphold autonomy are happening at the same time. They seem as though they would be at odds with one another, but in fact, there is no conflict, because faint boundary lines already exist in the world corresponding to geographical conditions as well as prior historical and cultural changes. Clearly demarcating all of these boundary lines throughout the whole world would perhaps reveal other examples of different regions whose political boundary lines tend toward integration, but whose geographical boundary lines are conversely tending toward maintaining the autonomy of individual areas.

The election race last year between Trump and Hillary Clinton can in fact, to some extent, be considered a referendum on two very different paths for the U.S., “global control” versus “America First.” But because the presidential election and this referendum on the overarching policy of the U.S. government going forward were conflated this way, the American people’s choice for “America First” was not necessarily a choice for Trump because he would enact all of the country’s current defensive tactics. Rather, he won the presidency on the basis of this “America First” ideology, so now he necessarily must use all his power to enact it.

Perhaps the next issue we should examine is the “pivot toward Asia” foreign policy strategy that Obama employed for many years during his term. On the one hand, the center of American strategy should once again be the Middle East. On the other hand, given the context of decreasing manpower in the U.S. government, the author believes that it would be difficult for this “pivot to Asia” to continue in either an actual or nominal sense. Judging by the “China and the Asia Pacific Stability Initiative,” in the future, the American military is going to restructure its presence in the Asia Pacific region, focusing on the pre-deployment of equipment while reducing the presence of actual Americans. It also hopes to advance relations with its allies through this kind of controlled contact and intelligence communication.

As for the implications of all of this for Taiwan, specifically, the U.S. will increase its weapons sales to Taiwan and strengthen its relationship with intelligence personnel. This kind of development could either be an opportunity or a crisis for Taiwan. Eventually, we will know how to view it, but we must not misjudge this early step.

Recently at a rally in Munich, German Chancellor Angela Merkel expressed with much personal feeling that the United States could no longer be relied on, and that “the times when we could fully count on others are over to a certain extent … We Europeans must really take our destiny into our own hands.” How true that is! The European Union is ready to move forward – do we really want to continue relying on others?

The author is a former overseas investor, a scholar of history, and a private school teacher.