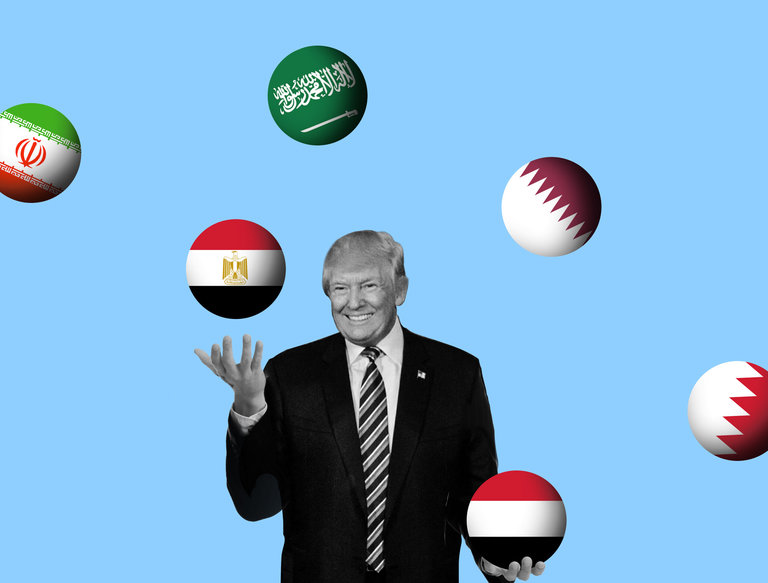 It has been over five months since the inauguration of the Trump administration. With instances such as the departure from the Paris climate agreement, which deals with global climate change, President Trump has bewildered the world. The values and interests of the United States no longer match those of Europe, and thus, there is a growing distance between them. On the other hand, in the Middle East, there are moves to use Trump to justify its own diplomacy. The decision by countries such as Saudi Arabia, the United Arab Emirates and Egypt to sever ties with Qatar would be an example of such actions.

Discord in U.S.-European relations is tied to fluctuations in the course of the world. Along with the amplified friction caused by Trump diplomacy, we need to be aware of the risks when U.S. allies pursue their own diplomatic routes.

What are the features of President Trump’s ideology and conduct?

Concerning international relations, his interests lie in calculating how the United States profits or loses. He tends to think about securing safety by the merits of military power and neglects soft powers like philosophy and values. Because he communicates solely through Twitter, where the number of characters is limited, he ignores the relationship and mutual influence of each political measure and does not mind if there is no consistency in his policies overall. He listens well to what he is told but is easily influenced by whatever opinion he has just heard.

Chairman Ray Dalio of Bridgewater Associates, the world’s largest hedge fund, posted on the social media website LinkedIn: “When faced with the choices between what’s good for the whole and what’s good for the part, and between harmony and conflict, he has a strong tendency to choose the part and conflict.” The part Trump prefers is support of the domestic core.

At the NATO summit on May 25, first-time participant President Trump did not venture to speak about the United States’ participation in the defense collective and emphasized the message that nations of Europe, who spend little on defense, should properly pay for the sake of U.S. taxpayers. European countries were confused by this. Just beforehand, Defense Secretary Mattis had attended the defense ministers’ meeting where each country reaffirmed the standard of defense spending at 2 percent of the gross domestic product, an action plan and an agreement of a goal to aim for that had already been made.

The Group of Seven leading industrial nations’ meeting in Italy continued from there, where the discussion on global warming broke down between the United States and the six other countries. It was reported that Trump’s understanding of the global warming issue had deepened after taking office. However, as if to curb the assertions of those, such as German Chancellor Merkel, who promote the Paris accord, Trump complained that environmental restrictions would harm U.S. coal miners.

During an election rally in Munich after the G-7 summit, Chancellor Merkel remarked that the era in which other countries could be completely relied on is over.

Triggered by growing bewilderment, disappointment and opposition toward the U.S. administration, a different movement is sprouting in the Middle East. Saudi Arabia, the United Arab Emirates and Egypt are breaking off with Qatar. The countries that broke off and Qatar are all strategically important Middle Eastern allies for the United States.

According to the U.S. State Department, it received notice from the United Arab Emirates just before ties were broken off with Qatar, but it was not contacted concerning Saudi Arabia’s diplomatic route. However, Saudi Arabia’s King Salman is having discussions with President Trump over the telephone.

Right after the severing of relations, Trump tweeted, “During my recent trip to the Middle East I stated that there can no longer be funding of Radical Ideology. Leaders pointed to Qatar — look!” He accepted and supported the stance of those siding with Saudi Arabia without fully understanding it.

During the Saudi Arabia visit on May 21, President Trump emphasized to the leaders that their common threats are Iran and Islamic extremists. Tamim, the leader of Qatar, was also at that meeting. However, it is believed that in private talks with Trump, Saudi Arabia, the United Arab Emirates, Egypt and Bahrain’s leaders warned of Qatar’s faults, such as support for the Muslim Brotherhood and a stance of reconciliation with Iran.

By winning favor with Trump, who was supposed to simplify the complicated affairs of the Middle East, Saudi Arabia and the other countries were able to constrict Qatar, which they already opposed. This made the U.S. Department of Defense and the State Department panic. Qatar has the largest U.S. military base in the Middle East and fissures between Middle Eastern allies will be a hindrance to U.S. Middle Eastern diplomacy.

On the 20th, two weeks after the severance, the U.S. State Department commented that they did not know what the countries siding with Saudi Arabia wanted. The next day, Mohammad bin Salman, who is thought of as someone who will only have his own way in diplomacy, was promoted to the position of crown prince. The demands that those with Saudi Arabia issued last weekend include the shutdown of a television network that is critical of the surrounding countries and compensation for each country, which would be difficult conditions for Qatar to accept. There is no sign of conflict resolution.

Another diplomatic matter for the United States is the Korean Peninsula and not just the threat of North Korea. A serious problem for the president to consider is that the Terminal High Altitude Area Defense, which was installed in South Korea by the United States military, was suspended from operations by the Moon Jae-in administration. The fissure in the U.S.-Korean alliance is deep.

Some in South Korea argue that the country should distance itself from the United States and look for a way to reinforce a cooperative relationship with China, using Chancellor Merkel’s statement as a valid reason to do so. Just like that, ripples are spreading out in a chain reaction to Trump’s diplomacy.