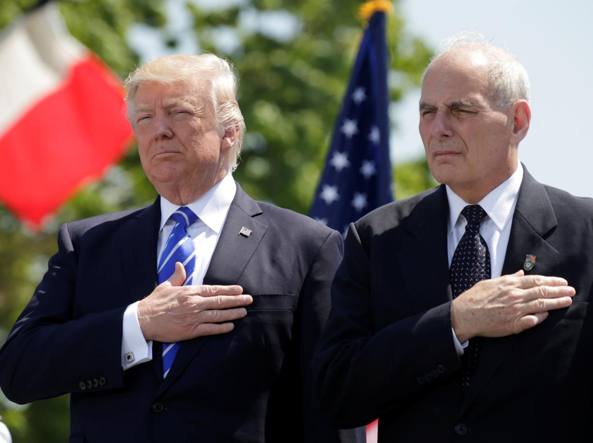 The removal of the White House chief of staff is the first great shock to The Donald’s presidency. The government’s activity has yielded meager results: the appointment of a Supreme Court judge and little else.

The defenestration of the White House chief of staff is the first great shock to Donald Trump’s presidency. Up to this point, he had managed to make the news in the most unpredictable ways. Yet, he has reached the milestone of the first six months as leader of the U.S. and the government’s activity has yielded meager results: the appointment of a Supreme Court justice and little else. It can be tempting to claim that Trump is trying to impose military discipline on an unruly Congress by replacing a cunning politician such as Reince Priebus with a Marine Corps general for the delicate role of chief of staff (the man who tends to relations with Congress and heads the president’s team). Certainly, the leader is increasingly obsessed with loyalty: he demands absolute allegiance, and he wants assistants who are willing to do anything to look out for him and save his face when he makes a mess, as is often the case.

What is certain is that The Donald is frustrated by the repeated defeats he has suffered at the hands of his own majority in the Senate, and Priebus was inevitably the first to be blamed. What was surprising about his sacking (passed off as a voluntary resignation) was the way it occurred, i.e., while he was traveling on Air Force One with Trump and Priebus’ great enemy, Anthony Scaramucci. However, the event in its substance was not unexpected. Priebus’ “long goodbye” was marked by the progressive departure of those loyal to him. His deputy, Katie Walsh, was the first to leave the White House; she realized before the others that there was no future with Trump. Then came Communications Director Mike Dubke, who left two months ago without protest and without drawing attention (he resigned while Trump was abroad) after the president accused him of not having defended him with sufficient energy after FBI Director Comey’s firing. The landslide turned into an avalanche in recent days, when Press Secretary Sean Spicer left the stage and Anthony Scaramucci made it to the White House. Scaramucci is more of a bulldozer than a communicator. He immediately started chasing after the officials responsible for “leaks” to the press and used brutal language to challenge Priebus as well as Steve Bannon, who was once considered the key figure in the White House, the actual president even. Many believe that Bannon’s fate is sealed as well, but the “alt-right” ideologue is shrewder than Priebus and downsized his own role long ago.* He does, however, still talk to journalists. Moreover, a book by Joshua Green, “Devil’s Bargain,” which enhances his sulphuric figure, was released a few days ago, once again enraging Trump. Bannon is to be treated with care, however, because through Breitbart, he controls an important segment of the news sources of the radical right, Trump’s core electorate. Priebus was instead utterly toothless, as he had lost his people and the president’s trust.

The Key Positions Are in the Hands of Three Marines

In Congress, Republicans had been saying for some time that they no longer listened to Priebus, knowing he had little influence in the West Wing. Will all of this change with John Kelly? The man who has thus far held the reins of the Department of Homeland Security will certainly bring back some order to the president’s team. It will be interesting to see what relationships he will be able to create with Republican leaders in Congress, starting with Paul Ryan, who tried until the very end to persuade Priebus to remain. Kelly has a military background, but he is also a man of the world who has had frequent relations with politics during his long career. Trump probably dreams of seeing his Republican congressmen march as a united platoon. Kelly will give him his personal loyalty and a feeling of greater discipline, but not this. And yet, the fact that in the America of checks and balances, three key positions – secretary of defense, chairman of the Joint Chiefs of Staff and White House chief of staff – have been handed to three marines (James Mattis, Joseph Dunford and John Kelly), raises some eyebrows.

*Editor’s note: “Alt-right” refers to a political grouping or tendency mixing racism, white nationalism and populism, a name currently embraced by some white supremacists and white nationalists to refer to themselves and their ideology, which emphasizes preserving and protecting the white race in the United States.