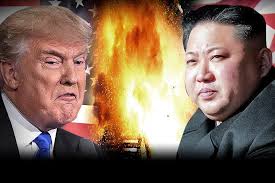 Anything is possible. Even if, for the time being, it is just a verbal escalation, there is no guarantee that a nuclear war will not break out between the United States and North Korea. On Friday, Aug. 11, on the island of Guam, a territory in the Pacific Ocean that Spain ceded to the U.S. in 1898, preparations to get the population to safety in the event of a North Korean attack continued in earnest. Even Hawaii, the 50th U.S. state, is preparing for a nuclear attack. It sits at an equal distance between Washington and Pyongyang and within 20 minutes of a North Korean intercontinental missile launch, so the threat is being taken very seriously. Particularly as The Washington Post has just revealed that “North Korea has successfully produced a miniaturized nuclear warhead that can fit inside its missiles… The United States calculated last month that up to 60 nuclear weapons are now controlled by North Korean leader Kim Jong Un.” There can now be no more doubt on this.

However, it has not stopped the “war of words” between the opposing nations. The United States had previously applied a number of economic sanctions, the last of which dates from Aug. 5 last year and is contained in a U.N. Security Council resolution that even China and Russia, allies of North Korea, voted for. These sanctions seem to have had no effect on Pyongyang, which is tirelessly pursuing its missile launch tests. The reason for this seems to be events that the North Korean leaders have taken note of. The opinion in Pyongyang is that “Pakistan has nuclear weapons, but no one is thinking of toppling the Pakistani military. Saddam Hussein and Gadhafi had no nuclear weapons, and one ended up hanged and the other lynched.”*

It has to be understood that nuclear weapons and intercontinental missiles are a question of survival for North Korea. That being said, it is clear that confrontation would lead to a humanitarian disaster. History has preserved examples of this in Hiroshima and Nagasaki, which took place in August 72 years ago. Despite all of that, the interests of the various parties involved are completely different. China and Russia cannot remain neutral in the face of such a conflict if it occurs. The West is not necessarily united behind the United States, even if Australia has confirmed its support for the White House. Since his election, Donald Trump has antagonized many countries, including Mexico, Cuba and Venezuela. His withdrawal from the Paris climate agreement means that Paris and the rest of Europe are not necessarily his allies. Internally, the American president has been weakened by a number of affairs. A nuclear war would have the strange advantage of “putting them in order,” and it is true that many factors are now making the nuclear threat very real. Trump has declared that “military solutions are now fully in place, locked and loaded.” Who will draw first?

*Editor’s note: While accurately translated, this quote could not be verified.