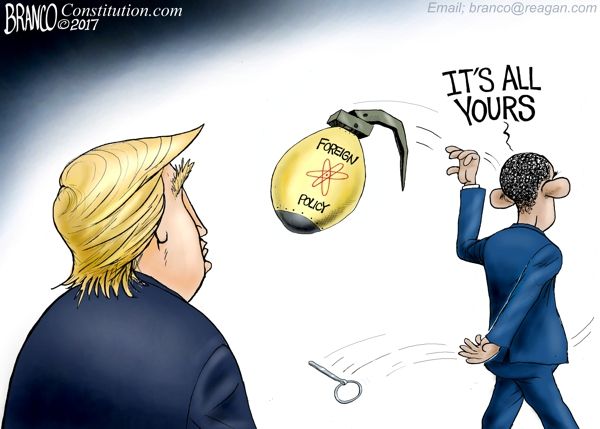 The criticism of Donald Trump’s wayward foreign policy ignores the fact that mistakes have already been made. Barack Obama’s “strategic patience” encouraged despots like Kim Jong Un, Putin and Assad.

Trump has not exactly had much luck in his handling of the North Korea crisis. First, he naively relied on the Chinese and thought Beijing would help him out. Then he tried wild threats, which fueled fears of a nuclear clash with Pyongyang. After North Korea’s most recent nuclear test, he tweeted strong criticism at his South Korean allies and their “appeasement talk.” Not exactly what you would call a united front against the rogue regime in Pyongyang.

After seven months in office, the president’s deterrent power has also suffered a major blow. No one seems to attach much importance to threats from the White House anymore because Trump has shown too often that he is only bluffing. Kim Jong Un has shown himself to be completely unimpressed in any case and has further intensified the frequency and boldness of his missile and nuclear tests.

Trump’s foreign policy actions are unstatesmanlike, and he is confusing allies with his erratic behavior. But it is a bit tasteless to ridicule and deride the new president for the messy situation with North Korea.

In fact, Trump is faced with an almost impossible problem that was left to him by his predecessor. Obama had eight years to dissuade North Korea, but he irresponsibly squandered this time. If Kim Jong Un is really capable of threatening mainland America with nuclear weapons, this shows how many presidents before Trump have failed — Bill Clinton as much as George W. Bush and Obama.

The previous president is particularly to blame, however, because he made very little serious effort, diplomatically or otherwise, to dissuade Pyongyang from going down this path. And because the huge acceleration of the North Korea program under the new Kim happened during Obama’s time in office.

It is also somewhat hypocritical, as is often claimed, to say that this development has come as a complete surprise. As far back as 2013, the indiscretion of a Republican congressman revealed that U.S. intelligence services at least were of the opinion that North Korea already had the ability to build a small nuclear warhead. That is a prerequisite for transporting a nuclear bomb with a long-range missile.

This was just the opinion of a minority of the intelligence services, but at the very least, it showed what technical capabilities some experts thought the regime in Pyongyang might possess. Even at that point, it would have been high time to do something more to avert the threat. But Obama stuck with his policy of “strategic patience” — a nice way of saying “doing nothing.”

It is also not the case, as claimed by some of Obama’s former colleagues, that the president had exhausted all sanction options. As demonstrated by Trump’s measures against Chinese firms that do business with North Korea, a great deal more would have been possible.

But the policies of the first black president seemed mainly about not annoying Beijing. So Obama intensified only clandestine measures against North Korea, which are presumably responsible for a series of failed rocket tests in recent years. As we are now seeing, that wasn’t decisive enough to substantially slow down the North Korean program.

North Korea is, therefore, one in a series of foreign policy disasters that put Obama’s policy of restraint in a critical light. “Don’t do stupid shit” was how Obama himself once described the essence of his foreign policy doctrine. As is now clear, however, it is not enough to be anti-Bush and not go on foreign policy adventures to achieve successful global governance.

Time and time again, Obama was shipwrecked by being hesitant and passive. He largely ignored Russia’s new neo-imperial foreign policy and then reacted very tamely to the annexation of Crimea and Moscow’s continued war in eastern Ukraine.

In Syria, Obama simply looked on as the bloodiest catastrophe since World War II unfolded, because he believed America’s interests were not sufficiently affected. As a result, floods of refugees are now destabilizing Europe, and therefore the West, as a whole, and Moscow has returned as a potent force in the Middle East.

Obama and the Hegelian World Spirit

And now, Iran’s sphere of influence stretches from Iraq and Syria to Lebanon, threatening to further destabilize the region. In the case of North Korea, the Obama administration always believed that the U.S. could only be the loser in the matter and therefore made no serious efforts to stop Pyongyang. They persuaded themselves into thinking it would be enough to prolong the status quo and wait for the regime to collapse. But thanks to bombs and long-distance rockets, the regime is all the more firmly in control.

One of Obama’s favorite ideas was that some regimes, such as those in Moscow, Damascus and Pyongyang, were on the wrong side of history, and that history’s Hegelian arc would bend toward more democracy, freedom and peace. As if the world’s spirit alone would tame those spoiling the international order.

In fact, under Obama, we experienced the first one-off contraction since the collapse of communism in areas in the world that have freedom and democracy. This is shown most clearly in Freedom House’s annual reports.* We have entered a phase of instability.

All of this must now be contained by a new president who has a spectacular lack of knowledge, even temperament or ability to learn. This is to be feared. That Trump can now cause so much damage can also be attributed to Obama’s multiple foreign policy failures — even if Trump’s obvious inabilities make that easy to forget.

*Editor’s note: Freedom House is an independent watchdog organization founded in 1941 and based in Washington, D.C., which states as its mission the expansion of freedom and democracy around the world through research and analysis.