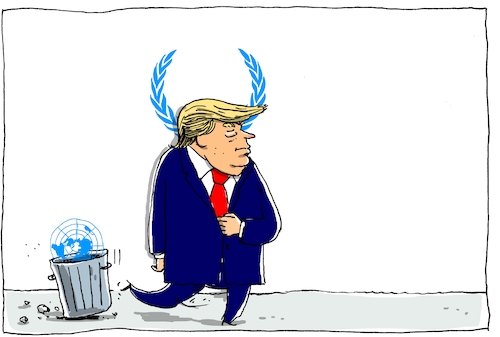 The president of the United States is attempting to dismantle our international diplomatic order.

The disgraceful verbal escalation between the president of the United States, Donald Trump, and the leader of North Korea, Kim Jong Un, is reminiscent of a teenage fight, packed with threats and bravado. But it is also much more than that. The escalation indicates how much the president’s ideas about international relations incapacitate him from dealing with complex crises that, when poorly managed, can have grave consequences – as is the current case.

It should be unnecessary to remark that the United States and North Korea are not comparable societies. The liberties and rights that their citizens enjoy differ wildly: The most powerful democracy in the world is by no means on the same plane as a shady communist hereditary dictatorship. It is precisely this point that the White House’s current resident should keep in mind when presenting his vision of what the world will look like in upcoming years, especially when he is speaking at the General Assembly of the United Nations, the foremost stage of the international community. This platform should be anything but a place from which to throw about unveiled insults and threats.

However alarming one finds the level of hostility in Trump’s management of the crisis with North Korea, the president of the United States has let slip an even more worrying idea that would affect the middle and long-term survival of our current system of diplomatic relations. In his application of fierce economic neoliberalism to dialogue among nations, Trump has proclaimed his vision of an international community composed of strong nation states, each one seeking and proclaiming its own interests above any other considerations. The United States’ chief executive added that this system would promote peaceful relations, forgetting – or ignoring – that that was the very same system that dominated Europe in the 19th century, and which resulted in two world wars, hundreds of millions dead and a divided world for 70 years. And, by the way, the United States opted out of that system, preferring isolationism for the most part until some heads of state understood – against their will – that we live on a planet where it is no longer possible to close oneself off.

Since 1945, with our ups and downs, and sadly numerous exceptions, the international community has found and consolidated a system that promotes peaceful living for citizens and resolving disputes by means of negotiation and intervention by international groups, whose members sometimes include nations who have no direct interest in the concrete problem at hand. It is a unifying system that has provided some great examples of democratic success and progress, such as the European Union, which Trump holds so much in contempt. Substituting multilateral forums for secret meetings between leaders, in which selfishness – which Trump poorly renames patriotism – functions as the guarantor that everything will turn out well, is simply quite difficult to believe. What is worse, in his words, the president of the United States remarked that in this system, each country should be organized according to its differences. Should human rights violations in other places no longer matter?

Decidedly, the world according to Donald Trump will not be an improvement.