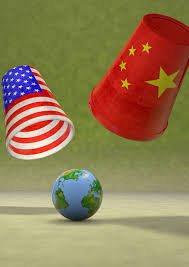 The conflict between North and South Korea is nothing new, but it’s made big headlines recently. Five years after World War II, between 1950 and 1953, the Korean War began with the U.S. on the side of the South, and China and the Soviet Union backing the North. It was a conflict that ended in a “military stalemate.” Some 67 years later, the war has technically never ended.

The body count was a massacre: 54,000 Americans, more than 1.187 million North Koreans, more than 700,000 South Koreans, 500,000 Chinese, etc. Once China intervened, the legendary U.S. Gen. Douglas MacArthur proposed a nuclear strike on its troops, but President Harry Truman and Congress both feared the potential consequence: a nuclear conflict with the Soviet Union.

Instead, they thought it best to replace MacArthur. Nuclear tensions are nothing new, either. For Mao, China’s intervention was justified as a defensive move against U.S. military presence on the peninsula, a fear that still exists today. The Soviets agreed, and Stalin said, “If we allow the United States to occupy all of Korea … we should be prepared for the United States to declare war on China.”*

It’s an attitude that hasn’t changed much for Russia. Today, any attempt to change geopolitical strategy in the region is still highly sensitive. But the U.S. creates pretexts to make substantial changes in its military presence, poking at the Tiger and the Bear** with a short stick – a dangerous stunt, as all are nuclear powers.

China has maintained constant, accelerating economic growth since the 1980s. It’s why the U.S. placed so many troops around South Korea, with approximately 25,000 to 33,000 in South Korea and 40,000 in Japan, and highly advanced military technology covering land, sea, air and space.

That’s not even to mention that to reach the U.S., the missiles must first make it over South Korea, Japan (1,000 kilometers or about 621 miles from North Korea) and the entire Pacific Ocean. To give you an idea, just reaching the famous island of Guam that is so discussed in the media and where U.S. troops are stationed would take a missile at least 14 minutes – more than enough time for the U.S. to easily shoot it down.

North Korea’s military technology is just too far behind that of North America. Asking North Korea to disarm itself is impossible without a guarantee that it won’t be attacked or invaded. And Kim Jong Un has fresh in his memory what happened when Libya, Yugoslavia and Iraq disarmed their own missiles: they were destroyed. Fresh too are the memories of how they killed Saddam Hussein with his family and Libyan leader Moammar Gadhafi (massacred with his children). The same would happen to Kim Jong Un.

It would be easy to resolve all of this with diplomacy: peace treaties and a declaration prohibiting further development of nuclear weapons. But that is not the United States’ interest. Why? Simple: The problem is not North Korea, but the fact that China has surpassed the U.S. in that it (a) is now the world’s great commercial power and (b) currently has the highest gross domestic product in the world.

In the financial world, the dollar is still king, but in a minimum of four years, the yuan will be more visible than the dollar and the U.S. will begin to be history. In the face of China’s unstoppable rise, the U.S. is suffocating from the irreversible loss of its hegemony. Everyone sees it. Destabilization in the region – better yet a war – is a ticking time bomb to the economic, commercial, military and financial legs of China and Russia. All the noise is covering the truth: the problem isn’t North Korea, it’s China.

*Editor’s note: This statement was actually made in a telegram Mao sent to Stalin discussing China’s plans to invade Korea in 1950.

**Editor’s note: “The Tiger and the Bear” refer to China and Russia, respectively.