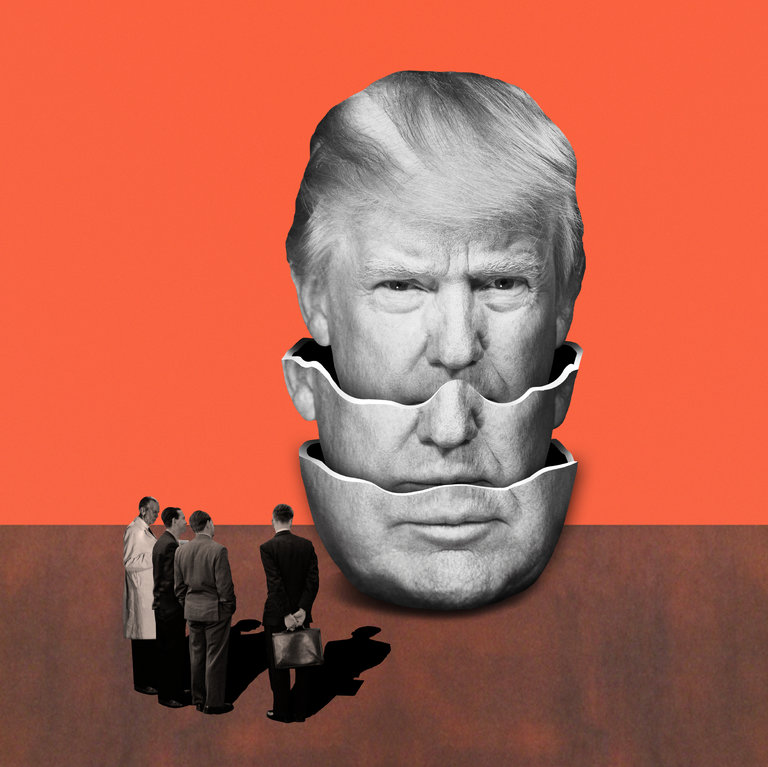 A number of psychiatrists in the U.S. are worried about President Donald Trump’s mental state. His behavior may be borderline, but more than anything, it reflects the society which brought him to power.

“We’re OK, the country’s not,” said NBC host Joe Scarborough, as he and his partner, Mika Brzezinski, became victims of Donald Trump’s fury last June. The U.S. president bad-mouthed Scarborough, calling him “Psycho Joe,” and in reference to a meeting with him and Brzezinski said, “she was bleeding badly from a face-lift.” The outrage was massive, and the NBC host suggested what many Americans had already thought: Has the president gone crazy?

In hindsight, the attack on the two journalists was just one of the more harmless examples of the impulsive and scathing way Trump reacts to would-be enemies. Between this incident and the upcoming anniversary of his election, there have been attempts to defend marching neo-Nazis in Charlottesville, to defend himself from countless personal attacks from opponents, and his impulsive threats against North Korea. Many Americans who did not vote for Trump are quite simply terrified by his unpredictability – and it is no wonder that speculations around his mental state are growing.

“The Dangerous Case of Donald Trump” is a new collection of essays in which 27 psychiatrists and psychologists address the question of whether Trump could possibly have a personality disorder. Naturally, a book such as this was not long in coming; day by day, Trump provides too much ammunition for those who believe him to be mad, psychologically unstable or mentally ill.

The authors believe his erratic behavior, his constant self-praise, his well-documented lies and the way in which Trump acts toward his critics are indications of psychological problems, for example, sociopathy and a narcissistic personality disorder. The editors are Judith Lewis Herman from Harvard Medical School and Bandy X. Lee from Yale. In the foreword, they write that they want to warn the country that “anyone as mentally unstable as this man should not be entrusted with the life-and-death-powers of the presidency.”

Remote diagnoses are made quickly and are often controversial. It is not for nothing that the Goldwater rule states that members of the American Psychiatry Association should not make diagnoses about public figures without having carried out an extensive, in-person examination. This form of ethical self-restraint is due to the fact that being labelled as psychologically ill by a medical authority can quickly be used as a political weapon. Hence, critics of Lee and Herman’s book point out that on the whole, the physicians who feature in the book are quite close to Democrats.

Nevertheless, many in the profession believe it is their duty to point out problematic aspects of the president’s behavior. Almost 800 individuals working in the psychological and psychiatric field recently stated in a public appeal that they were concerned about Trump’s mental health and that it was their duty to warn the public.

Similarly, there is no shortage of politicians who will declare Trump to be dysfunctional. “I think he’s crazy,” said Rhode Island Democratic Sen. Jack Reed in July to his Republican colleague from Maine, Susan Collins. She responded that she was also concerned – fortuitously, the conversation was caught on tape and became public. Trump critic and Tennessean, Sen. Bob Corker, recently said that the president had thus far not shown the competence and stability necessary for the office.

Removal from Office on the Basis of Mental Illness Is Possible

It is actually possible to remove a president if he is no longer psychologically fit for the office. In such a case, the 25th Amendment authorizes the vice president and members of the Cabinet to act together with Congress. Theoretically, they can only relieve the president of his duties temporarily. The 25th Amendment was adopted in 1967 as a consequence of the murder of John F. Kennedy four years prior. It was intended to facilitate a smooth dismissal process in case the president was incapable of discharging the powers and duties of the office. This process can be initiated, for example, by a commission of medical experts convened by Congress. Removal from office on the basis of this amendment is not a classic impeachment process, which is based on a political decision carried out by Congress.

However, both processes entail major hurdles. Removal from office on the grounds of insufficient psychological capability would require medical proof. Individual opinions that Trump has a personality disorder or acts in a “crazy” manner are not enough. On the other hand, a political impeachment process would center on the manner in which he discharges his duties, independent of Trump’s mental state. A possible reason for impeachment would be ethical misconduct, as Bill Clinton was accused of, for instance.

More importantly, critics point out that a personality disorder or a mental illness does not automatically mean that someone cannot be president. According to a study from Duke University, half of the first 37 American presidents were deemed to have shown evidence of such a disorder. For instance, physicians believe they can posthumously observe symptoms of depression and anxiety disorders in Abraham Lincoln and Thomas Jefferson.

There can be no doubt that certain personality disorders compromise an individual’s suitability for office. In the eyes of many spectators, Trump shows traits of a narcissist, perhaps of a narcissistic personality disorder. Experts on this disorder rightly point out, however, that people with this kind of personality structure often fit very well into our performance and approval-centered system and perform extremely successfully. A lack of empathy, overemphasis of one’s own importance, lying to one’s own benefit and a distorted relationship with reality – all these behavioral traits can be ascribed to Trump; however, not just to him, but to many successful business, organization and state leaders.

Indeed, the psychiatrist, Allen Frances, argues that it is not Trump that is mad, but rather the society that generated him. “Calling Trump crazy allows us to avoid confronting the craziness in our society,” Frances writes in his new book, “Twilight of American Sanity.” This line of argument does have some merit – along these lines, racism is considered an “illness.” The ethical vacuity of the Republican Party – a party which brought a professed sexist to power and a party in which many wanted to take revenge against the sheer reality of having had a black president – one could call “ill.” A system which has hundreds of thousands of homeless children and drug addicts and which disproportionately imprisons black people for the smallest crimes is not “healthy.” This does not rule out the president having a personality disorder – it does however divert attention away from remote diagnoses on the level of the individual.

Trump came to power on the basis of a decision by the Republican Party and numerous voters. To be rid of him through medical diagnoses is not only very unlikely, in the eyes of many of his opponents, it is also not a desirable outcome. Instead of speculating about the president’s mental state, many would prefer to defeat him politically – even if it takes the length of his tenure. “The medical profession and democracy would be ill served if a political determination at this level were ever disguised as clinical judgment,” wrote psychiatrists Peter D. Kramer and Sally L. Satel recently in The New York Times. And they begged the question: “Don’t the people have the right to choose an exceedingly narcissistic leader?”

Trump’s well-documented lies, his derogatory attacks on critics, his overt sexism and racism – all of this is perfectly in order for his supporters because they think along the same lines. It was also part of Trump’s mission to mix up the establishment in Washington. Meanwhile the Republicans in government and in Congress excuse Trump’s behavior, sometimes as impulsive, sometimes as inexperienced, and above all they attempt to achieve their own goals with this president. As long as they believe they can succeed in doing so, there will be no serious attempt to remove him from office – whether that be a procedure under the 25th Amendment or an impeachment process on other grounds. As long as Republicans want him to be, Trump will remain president – and given the majority in Congress, it is unlikely that the Democrats alone can remove him from office.

It may be important to call out problematic aspects of the president’s personality – from the perspective of his opponents; however, they must first deal with his problematic political decisions. As a result, a premature removal from office is rather a distracting fantasy.