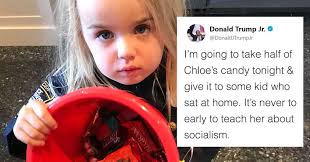 Bloomberg Businessweek recently published an article titled “Get Rid of Capitalism? Millennials Are Ready to Talk About It,” which claimed that last weekend in New York, a debate about whether it’s time to abandon capitalism was the hottest event in town. The article also said that surveys have shown that young Americans today are leaning more toward socialism than capitalism. Previously, Trump’s older son tweeted that taking away half of his daughter’s candy was a way to teach his child the meaning of socialism. One can’t help but think of all the recent news on socialism, coinciding with the 100th anniversary of the October Revolution, and think of all the implications.

Some online readers said people in the West do not know the meaning of socialism, but I believe that, to people living in the capitalist Western world, socialism is not a foreign idea. There’s certainly no lack of objective assessments of socialism in the Western realm of thought or in its public consciousness. Karl Marx being considered the greatest thinker at the turn of the millennium is one example.

The experiments in socialism in the 20th century have promoted a series of self-improvements by Western capitalism, helped achieve a period of stable development and have also reflected a certain level of self-adjustment that capitalism possesses; however, for capitalism, these adjustments are stuck on the distribution level, such as with an increase in benefits, and have never surpassed the bottom line or the foundation of capitalism, the private ownership of capital goods. This is also the same bottom line that led to the financial crisis in America a few years ago.

If socialism is really becoming “both a political identity and a culture,” as said in the Bloomberg article, and is becoming more attractive to the American public, the reasons are due to the decline of Western capitalism as signified by the global financial crisis. This decline is shown mainly in the worsening working and living conditions of lower and middle-class citizens. Socialist expressions in America could be considered a manifestation of the loss of soul in this group of people. Examined in this way, the rise of socialist ideas reflects not so much young Americans’ yearning for socialism, but their discontent with capitalism.

Socialism’s rising visibility in the Western world is definitely not an isolated event. It reflects deep changes in world history through our values. If one were to connect this deep change with the dissolution of the USSR, then the contrast is even more striking. For a long time after the USSR dissolved, humans lacked a voice in the pursuit of ideals, and the lack of beliefs became global.

Yet, in less than 30 years, the West began to have systemic economic and political crises, while Chinese socialism revealed a rainbow after the storm that has ushered in a new era. In one way, this shows how the reasons and consequences behind the dissolution of the USSR still pose major questions that must be fully considered; in another way, this shows the vitality of socialism. “After thousands of ships have passed a sunken vessel, an ailing tree is showing new signs of life,” is a poetic line that perfectly captures this kind of rise and fall in world history.

On the other hand, while the American media reports that among young Americans, more are leaning toward socialism than capitalism, a Gallup Poll of all age groups last year showed that 60 percent of Americans still held a positive attitude toward capitalism. And last month, a survey showed that among all American age groups, 59 percent of citizens would still choose to live in a capitalist society. This indicates that while there are signs that people concerned with the revival of socialism should be aware of, in the current world, the West is still stronger than us.

The author is a researcher at the Chinese Academy of Social Sciences.