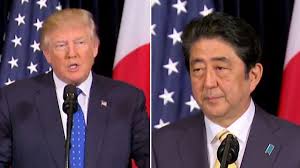 However, at a meeting of Japan and U.S. business leaders on trade issues, Trump also complained that “our trade with Japan is not fair and it’s not open.”

On security guarantees, one could say Trump showed firm unity with Japan toward the Japan –U.S. alliance. But his continued stance up to this point of pursuing ‘America First’ has not wavered.

This is Trump’s first trip to Japan since taking office. It is the fifth time he has met with the prime minister. During the U.S. presidential election last year, Trump expressed his discontent with the defense spending burdens of allied countries including Japan, but through these numerous talks with the prime minister, he must have deepened his understanding of the North Korea issue.

He has affirmed to the prime minister that in order to get North Korea to quit its nuclear and missile development, a policy of maximum pressure and getting China to take on an even bigger role is absolutely needed.

Trump even said he was considering putting North Korea back on the U.S. list of state-sponsored terrorist countries.*

Trump also met with North Korea kidnapping victims and promised to pursue a resolution of problems stemming from the abductions.**

But, as always, some of Trump’s recent comments such as Japan should “shoot them out of the sky” when North Korea launches missiles tread on dangerous ground.

Abe has deepened his relationship with Trump through these meetings, but now the prime minister must evaluate how much of his view is getting through to Trump.

In talks, the two agreed to continue cooperation on a U.S. – Japan Economic Dialogue framework over the Japan – U.S. trade imbalance.

Trump has expressed discontent with Japan, a country – second only to China – with which the U.S. has a trade deficit. He seems intent on pulling Japan into negotiations for opening agricultural trade, among other things.

Last month there was a meeting of the U.S. – Japan Economic Dialogue. Vice President Mike Pence met with Deputy Prime Minister Taro Aso and alluded to a free trade agreement between both nations. It seems that an agreement will be reached and U.S. economic aggression will get even stronger.

Japan is continuing the Trans-Pacific Partnership with the remaining 11 countries following the U.S. withdrawal from the agreement. Prime Minister Abe must get Trump to understand the importance of this multinational agreement to the stability of the region.