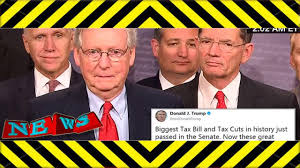 After all these months of failure, Trump has managed to pass an important bill on tax reform in Congress. However, this achievement won’t free the White House of the dangerous Russian focus, and it might cause new trouble in the future.

In the early hours of Dec. 2, the U.S. Senate, with an insubstantial majority of 51 votes to 49, approved the Republican tax reform bill.* This is the first significant success for the Republicans in the Trump era. For more than 30 years – since the Reagan era – it has been impossible for any administration to pass such exhaustive tax reform. However, in recent years, business and civilians alike have expressed more and more complaints about the complexity of the tax system and the high level of taxation. After ineffective efforts to cancel former President Obama’s health care law, a new failure would have left Trump and his party without any significant achievements before the 2018 midterm elections in Congress, elections which are traditionally considered preparation for the next presidential campaign. Now the Republicans have something to show the voters.

It is important to note that Trump has kept 1 out of 3 of his campaign promises to business (along with the failed cancellation of “Obamacare” and failure to significantly enhance investments in infrastructure). Large corporations, which recently had begun expressing disappointment with the president, are again on his side, because the proposed reform will reduce the corporate income tax from 35 percent to 20 percent, and will also allow rich people with extremely high incomes to pay less in taxes.

Finally, from an image point of view, Trump will be able to present himself as a successful leader, and he can now hope that this tax reform will distract people’s attention from special counsel Robert Mueller’s Russian investigation for a while. In the coming days, discussion about taxes will overshadow the news about the plea agreement of Michael Flynn, the former adviser to Trump, who admitted lying to the FBI. But the effect will be temporary – the activities of the Mueller commission have already gained momentum and depend little on the U.S. political process. Trump won’t be able to block the toxicity of the Russian investigation with one achievement, despite its significance.

However, this long-awaited victory brings Republicans not only opportunities, but also risks. The fact is that this proposed reform implies a reduction in taxes for almost all social groups only for the next few years. Already in 2021, after the next presidential election (an interesting coincidence), all but the wealthiest Americans, will pay more taxes than they do now. This prospect has faced stiff criticism from the Democrats, and has led to the unpopularity of the proposed tax reform. According to the most recent public opinion polls, the plan is supported on average by less than one-third of the population, while almost half the country is against it. As a result, Trump’s reform has become less popular than tax increases adopted by Bill Clinton and George H.W. Bush.

Aside from that, by passing this tax reform in the Senate, the Republicans have lured themselves into a logical and ideological trap. During the eight years of Obama’s presidency, Republicans untiringly criticized Democrats for the constant growth of the deficit and public debt. Many current congressmen were elected on the promise of helping to reduce the deficit in any way. However, thanks to the reduction of corporate taxes approved by the Senate, the national debt, according to experts, could grow by $1.5 trillion over the next 10 years. Even the expected growth of the economy due to the reform will compensate these drop-out incomes by no more than a third.

Thus, by achieving a tactical victory, Republicans have created a catastrophe waiting to happen. Will the Americans feel the effects of the tax reform before their taxes go down and then grow again? What is more important for the Republican base, fiscal discipline or tax reform? It’s not clear yet, but the unpopularity of the tax reform allows Democrats to nurture hope for victory in the 2018 midterm elections and the 2020 presidential election.

An important long-term problem for Republicans and Trump’s administration consists of the fact that reform on such a scale and complexity was developed behind closed doors, and changes to the bill were practically scribbled on a napkin at the end of the meeting in order for quick passage. Democrats were shocked at the way such an important bill was adopted. Some call it draining the Washington swamps, but generally it’s drying out important parliamentary procedures, a process which is strategically harmful to institutions.

It’s also important to note that the economic effect of this reform was not well calculated. There are a number of studies showing that it will give the U.S. economy 3 percent to 5 percent of additional growth. However, the main beneficiaries of the reform are corporations that prefer not to spend, but to save; as a result, the impact on economic growth may decline. Moreover, the strong points of the reform will be counterbalanced by the negative points from the same increase in the deficit and public debt. This reform won’t even bring any immediate psychological effect in the coming weeks, such effects have already manifested themselves in the growth of markets over the past year. However, it is good – even for the Russian economy – that the reform did not fail. The negative reaction of markets overheated by the reform plan would come as an extremely unpleasant surprise not only for the U.S. economy, but for the whole world.

Finally, from a long-term perspective, Trump’s reform may increase inequality and aggravate the problem of poverty, which the U.S. faces just as Russia does, given all the changes to the standard of living in these two countries. And this, in its turn, generates a whole tangle of problems that will have to be addressed in the 2020s by another administration.

*Editor’s note: The Republican tax bill passed in the Senate on Dec. 2, and the Senate bill then was to be reconciled with a version proposed by the House of Representatives. A vote on the final legislation released by Republicans Friday Dec. 15. is expected next week