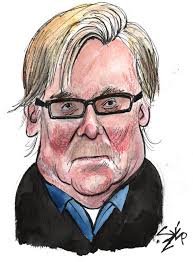 There is a tremor in Washington: The U.S. president and his allies are exiling Stephen Bannon as a show of power – and to incite fear among rebels.

The book is fascinating, stuffed with juicy anecdotes about Donald Trump, as well as his family and colleagues in the White House. One of the main informants is Stephen Bannon, far-right publicist, national conservative, White House chief strategist, media editor once more – and now finally at his political end, fired by Trump and dropped by the publishers of Breitbart News, his journalistic cannon of populism.

Michael Wolff’s “Fire and Fury” is a gigantic success because the book provides clear confirmation of many of the negative impressions and opinions about Trump, his family and their entourage, all of it fueled by Bannon. Of course, the book also damages Trump and his self-sculpted image as a brutal yet masterful decision-maker. So far, so good.

However, the uncomfortable truth is that, at the same time, this book is also a problem for the anti-Trump movement. It clouds the senses, it leads the public to believe that there is a half-demented clown draped in a dressing gown in the White House who spends the livelong day watching television surrounded by a band of amateurs. Whoever believes that, is making the same mistake from which Trump has benefitted for years – it underestimates him, his shrewdness and, above all, his powers of self-assertion.

Trump may well have been politically clueless at the beginning of his presidency, as the book describes. However, what is clear is that in the meantime, he has gotten clued up; he acts completely rationally, the words of his cutting rhetoric and his actual actions not always tallying with one another. What’s more, he has a well-marked survival instinct. Nothing stands as testament to this so clearly as the break with his ex-adviser Bannon, who must now leave his post as head of Breitbart News in one final humiliation.

Trump and the billionaire Mercer family, as co-owners of Breitbart, are disposing of Bannon in a concerted move. The whole thing is like a huge political drama, but in truth it is rooted in political calculus. Bannon’s “treason” in the book “Fire and Fury” gives the president the opportunity to make an example of Bannon in an act of revenge, thereby tying the rest of his entourage closer to him and deterring others who may want to follow suit.

The message is clear – whoever wants to overshadow the boss, whoever blabs to the press without authorization, whoever criticizes the Trump family like Bannon did, will be mercilessly seen off.

Only a Bit of Populism, Please.

But there is more. Trump has already fired and humiliated many colleagues; it’s simply that no one has been chased off as brutally as Bannon was. With his political execution for all the public to see, Trump is clearly endeavoring to distance himself from the radical right-wingers for which Bannon stands.

The series of electoral defeats which Trump and the Republicans had to swallow at the end of last year has shown that many voters, above all in the suburbs, are increasingly being scared off by those all too rabble-rousing and polarizing Bannon-style slogans. At the same time, this course of behavior is mobilizing and electrifying the Democratic grassroots, all of which Trump and the Republicans would rather do without right now.

It is about nothing less than the power in Washington. At the congressional elections in the fall, the Republican magnificos do not want to fortify their majorities in the House of Representatives and in the Senate with Bannon-style clones, but rather with more moderate conservative candidates. For them, populism is still alright, so long as it does not stray into radical territory. If Trump is now distancing himself from Bannon and his right-wing brigade, this means that he is swinging back in line with the party establishment; that is, as long as he expects this to be in his personal interest – without the Republican majorities in Congress, his power would be endangered.

With his upcoming trip to Davos for the World Economic Forum, the seat of power for the “globalists” much maligned by Bannon, Trump is also towing the party line. Trump is meanwhile attempting to approach the Democrats to close a big “deal” concerning the issue of immigration. If the “deal” does in fact bear fruit, he will be the first to laud himself as the great conciliator. If not, he will hold the Democrats responsible and stir up his core supporters against them. Either way, he’ll act depending on what seems opportune at the time.

Trump is populist, chaotic, divisive and unpredictable; he will certainly remain so because it is this style which so pleases his most loyal fans. However, he is and will remain a cool and calculated character, tossing old companions overboard if it serves his interests. That is what got him to where he is now sitting – and that is what makes him so dangerous. At least Bannon must now understand that, too.