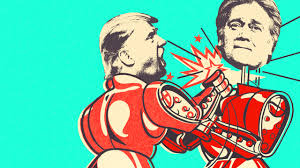 Trump’s former adviser, Steve Bannon, has opted for his own part of the business “deal” with the president. And journalist Michael Wolff knows well that the more scandalous it is, the better his book on the White House will sell.

“Fire and Fury:” A very fitting title for New York journalist Michael Wolff’s new book, in which he writes about the routine in Donald Trump’s White House. Wolff’s notes, based to a large extent on interviews with the president’s former adviser, Steve Bannon, reportedly upset Trump to the point where he turned white; thunder and lightning are flying in the White House. Simply “fire and fury.”

Which is Trump’s favorite expression. Among other things, he threatened North Korean leader Kim Jong Un with it last August. Now Wolff and Bannon have turned this bombast on the president. They’re giving Trump a taste of his own medicine. The president has met his masters in them, and that’s another reason their shot to the heart hurts him so much.

Trump’s lawyers are threatening Wolff and his publisher with lawsuits because the book, they say, contains untrue and offensive statements. That’s quite possible, but isn’t it ironic that the very president who spreads falsehoods and hurls insults everywhere he goes is suddenly such a touch-me-not?

Wolff is a resourceful, adept reporter — he’s been everywhere — but among American media, the reliability of his information is well known as often being very rubbery. He uses everything that passes under his nose and interprets it with alibi-like distancing: I’m selling it like I bought it.

Well, that is just like Trump himself chronically (even pathologically) likes to act. Fake news here, fake news there, we have our “alternative facts,” and anyone who doesn’t like it can foam at the mouth all they want, I’m the president now. Trump’s method is politically innovative and works fabulously for him in particular. But when someone uses it effectively against him, fire and fury rain down immediately.

Trump must be all the angrier that Wolff — being the self-described canis lupus, the wolf, last year in the White House, where he freely pursued his sources — is now doing such a devilish job of selling it. He’s been able to dominate the entire American media scene for a couple of days and to borrow for that aim the president himself, who can certainly threaten lawsuits; yet the money for the bestseller is already on the way to Wolff’s piggy bank. Who else can say that? It’s a master stroke Trump himself (even if he foams at the mouth) must admire.

Steve Bannon, who granted Wolff the most nourishing (“juicy,” as they say in America) look into the presidential kitchen, was an ordinary foot soldier in his electoral campaign who had “very little to do” with Trump’s “historic victory,” Trump now asserts. The irony and unintended denial of this assertion, which washes its hands of Bannon as if washing one’s hands of a complete nobody, is the fact that the same time, the president’s lawyers are threatening a lawsuit for alleged breach of an “employment contract,” which Bannon entered into with the campaign, namely with the Trump Organization.

But first and foremost, Americans would have to have a very short memory to lose sight of the role Bannon played for Trump. Although he jumped into the campaign in August 2016 after Trump had already won the primaries, it was still a pivotal moment in his duel with Hillary Clinton. It was Bannon who connected Trump with a far-right element that followed, among other things, the Breitbart News website, of which Bannon was editor-in-chief, and from which he created a platform that went as far as to flirt with racism. That is, with voters that Trump couldn’t directly court, but that he didn’t want to give up either. As one American commentator described it, “Trump may not be racist, but he won’t mind if racists vote for him.”*

The transition lever was none other than Bannon, the same person who introduced the campaign slogan “crooked Hillary,” calling her a swindler who should be put behind bars. Crowds chanting “Lock her up!” became the showpiece of Trump campaign rallies after Bannon’s arrival.

As a candidate, Trump used Bannon as long as it worked. As president, when he no longer needed him last August, he simply got rid of him. And Bannon is doing nothing other than behave in an equally cold-blooded manner: The president used me and now I’ll promote myself at the expense of the White House. Not directly at the president’s expense, but at that of Donald Jr., Ivanka and Jared, and all those “beautiful people” who went against me — they’ll pay for it.

When he was pushed out of the White House last year, Bannon claimed, “Now I’m free. I’ve got my hands back on my weapons. ‘It’s Bannon the Barbarian,’ someone said.” Now he’s fulfilled his dark warning, but again, Trump can only quietly admire how “elegantly,” mercilessly, simply without loyalty, and even subversively, Bannon decimates his inner circle.

The president is angry, his lawyers issue threats, and fire and fury over the cruel betrayal and injustice come sputtering out of the White House. But nothing more has happened than that Wolff and Bannon have applied Trump’s own principal to him: that everything is basically a business “deal,” and that it all comes down to how well you sell yourself. And that the end justifies all means.

*Editor’s note: Although accurately translated, the source of this quoted remark could not be independently verified.