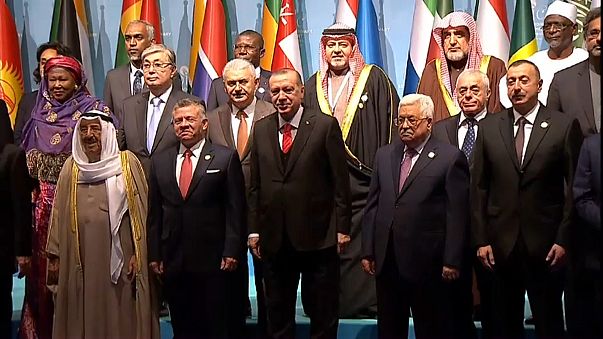 Let’s examine the Arab reaction which has ensued since Donald Trump kept his catastrophic promise and recognized Jerusalem as Israel’s capital, announcing plans to relocate the U.S. Embassy there. As Arabs, we called for a summit and strongly condemned the decision. We temporarily, albeit significantly, managed to win international public opinion against this decision and obtain a fair United Nations position on Jerusalem, taking advantage of the Istanbul summit to get this result at the U.N. * But what happened afterward?

Old habits die hard. Strategic, political and symbolic Arab and Palestinian considerations were overshadowed by ambiguity and secret meetings. It was no longer a secret that Arabs had different priorities when it came to Jerusalem and the precedence of the Palestinian case. The different Arab viewpoints reached the point of becoming a political and media scandal. It is now clear, almost to the point of being acknowledged publicly, that the different Arab positions are not only different but also contradictory, and that what is being said publicly has nothing to do with what is being discussed in closed sessions.

Unfortunately, this is what American officials wanted Jordanian officials and politicians to hear: Discussions about the significance of Jerusalem and the Palestinian cause are nothing but ink on paper, and what Arabs discuss behind closed doors is completely different, even contradictory. Their sole interest is either Iran or their national interests and domestic concerns.

Arab procrastination, leniency and ambiguity are behind the failure to create consistent and permanent opposition to the American decision. In a while, the decision will become the only truth and Arabs will get used to the new reality. Other states will follow and succumb to the new reality as well. This will happen if Arabs fail to institutionalize firm rejection of the American decision which the current facts seem to indicate.

The problem is that the positions which Arabs have invented no longer trick the children of young Arabs; society today is too sophisticated, and it tends to figure out these trivial games and old-fashioned gimmicks. Once again, what all of this boils down to is the double standard that marks Trump’s decision, a situation which is translated as being another obstacle in the already crooked path of the legitimacy of Arab rule.

As long as all the doors remain closed in the face of a peaceful political change, the only alternative will be the growth of another wave of radicalism among Arab youth as they lose faith in peaceful reform and in the possibility of reforming Arab regimes and nations. Among other factors, this explains why peaceful Arab protests against the American decision have been limited. Many people in the Arab street have lost hope in peaceful protest, and consider taking to the streets a waste of time. This fact paves the way for radical and conservative movements.

In Palestine, old deeds have taken an even uglier turn with worse consequences. Observing what was published about the meetings of the Palestinian central council and the Palestinian executive committee, we discover that the Palestinian authority and its allies didn’t even get past first base with useless and shallow thinking, disagreements and secret meetings. Hamas and the jihad movement didn’t participate, and disagreement within the executive committee erupted between Mahmoud Abbas and some of the members. The statements made by Arab leaders reflect a clear conflict between criticizing Israel and America, and the fact that they gain political legitimacy by coordinating with, and relying on the two countries.

How can one understand what Arab leaders are saying, when they call for abandoning the American peace process and cutting future ties with the U.S., but then act the opposite way?

*Editor’s note: Leaders of the Muslim world met at an unusual summit in Istanbul in December to coordinate a unified response to President Trump’s decision to recognize Jerusalem as Israel’s capital.