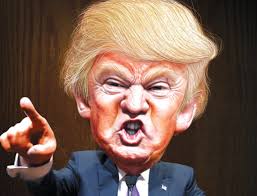 Trump is not the first U.S. president with a tendency toward coarseness, but there is a method to his obscenity. Many still stand by him, possibly for years to come.

A year ago, Donald Trump was sworn into office as president of the United States. Since then, barely a day has passed without a new faux pas, without him offending someone, an entire group, or a country.

More than a week ago, author Michael Wolff’s revelations were still keeping the public busy. In “Fire and Fury,” he describes the chaos at the White House as well as the Trump team’s alleged opinion of the president. The book’s contents are really nothing new. Moreover, there are legitimate doubts about the accuracy of the statements that are reported. However, the revelations do not really surprise anyone, but rather validate what most of the world already thinks about Trump.

The book had barely been published when Trump’s latest offensive remark pushed the White House’s outrageousness to the side. During an Oval Office meeting concerning immigration, Trump spoke with clear contempt about El Salvador, Haiti and countries in Africa, lamenting that a particularly large number of people from these “shithole countries” wanted to reach America. In a tweet, he denies having used this vulgar word. However, people in attendance have confirmed that this is exactly what he said.

The 54 African countries have now demanded an apology from Trump. Most U.S. media are so indignant over their president’s vulgar blunder that they have abandoned their usually strict restraint, and instead of paraphrasing it, leaving it out with blank spaces or bleeping it as they usually do with expressions they find offensive, have published the presidential obscenity in full.

Trump is not the first president with a tendency toward coarseness. To the contrary, history books are full of others. For example, Democratic President Lyndon B. Johnson and Republican President Richard Nixon were infamous for their uncontrolled bursts of anger and shamelessness. However, Trump’s obscenities and offensive remarks are not accidents. There is a method to them and they are an expression of a deliberate cultural break. They are supposed to demonstrate that he is not a conventional president from the political establishment.

Criticism of Trump’s vulgar behavior is understandable and necessary. That said, the steady concern with his mental state also conceals a problem. On the one hand, this subject dominates political discourse and allows the disasters committed by Trump to fade into obscurity. On the other hand, it hides the fact that a considerable number of American voters still side with him, and that 36 percent to 40 percent of Americans approve of what the president says and does.

There are two worlds that hardly ever meet and know less and less about each other. One and a half years ago, many of the media and many observers thought that someone like Trump could not possibly be elected president. Now, many believe that someone like him cannot and will not stay in office for long.

Careful though! As long as Trump keeps doing what many Republicans want (lowering taxes, cutting back environmental protections, strengthening the military) while also benefiting many of his voters (Walmart has just increased the hourly wage for its employees by $2 in response to the new tax cuts), he can still count on their support.

The current U.S. president is not a parody, but rather a harsh reality. One that may last for many years.