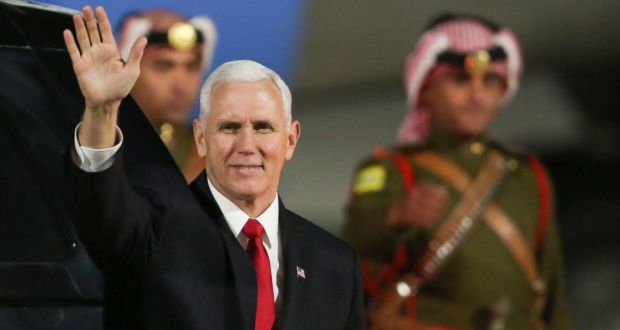 It is certainly clear that during his recent visit to Amman and Cairo, Vice President Mike Pence sought to reaffirm the strong partnership and ties among the United States’ historical allies in the region. He also sought to alleviate the justifiable fears which have been a natural reaction to President Donald Trump’s policy and positions on the issues that concern both countries.

Bilateral ties necessitate the support of countries like Jordan and Egypt in economic and military fields, as the stability of a country such as Jordan means a lot to the United States, which is facing major challenges in the Middle East, and fierce competition with regional and international forces that won’t think twice about competing with the U.S. in regions under its control. Despite Pence’s limited knowledge of foreign policy, he is fully aware of the fact that the region is concerned about other vital issues, apart from bilateral ties, such as the Palestinian cause.

Jordanian Minister of Foreign Affairs Ayman al Safadi was in Washington, D.C., where he held talks with his American counterpart. Without a doubt, the meetings paved the way with respect to Washington’s future plans for settling the Israeli-Arab conflict following Donald Trump’s catastrophic decision acknowledging Jerusalem as Israel’s capital.

The same issue was at the top of King Abdullah’s agenda for discussions with Pence in Amman yesterday. Upon his arrival at Marka International Airport in Jordan, Pence issued a comforting statement saying that his country supports a two-state solution and that one shouldn’t jump to conclusions when it comes to negotiations about Jerusalem. He made similar remarks after his meeting with Egyptian President Abdel Fattah al Sisi in Egypt.

The Jordanian strategy is based on encouraging the United States to pursue its role in the peace process by continuing negotiations that meet the requirements for a fair solution, based on the policy precedent of a two-state solution, and designating East Jerusalem as Palestine’s independent capital, with full independence based on internationally legitimate resolutions.

Pence’s discussions in Amman and Safadi’s meetings in Washington must have provided the Jordanian side with some good information about the upcoming steps the Trump administration will take in this regard. But the Palestinian side voiced pessimism about the U.S. settlement proposals, according to reports from Saeb Ereikat, head of the Palestinian Liberation Organization, as he presented details of an American plan, which was expected to be discussed in negotiations coming up in April.

The report gave the impression that the “deal of the century,” if officially presented, will not fulfill the minimum fair peace requirements. In spite of this, Arab countries, such as Jordan, do not share the Palestinian point of view, leading to American negligence with respect to fulfilling its role and forcing a search for new partners to engage in negotiating with Israel. The paradox Jordan faces is different and is based on rallying active international forces to pressure Washington into coming up with a fair peace solution and asking Washington not to abandon its role as an intermediary that respects the requirements for peace. For this reason, Jordan will continue to use diplomacy in an effort to influence the directives of the American administration, and work to develop a plan that corresponds with the Palestinian and Arab directives.

It is hard to jump to conclusions, and if Washington insists on presenting a plan which doesn’t take Palestinian interests into consideration, then no amount of force will permit the imposition an unjust solution against the Palestinians.

Jordan is taking this into consideration and hopes that one day the Trump administration acknowledges this fact before it gets involved in presenting a plan that is doomed to failure. Let’s wait and see what kind of impression Pence left behind.