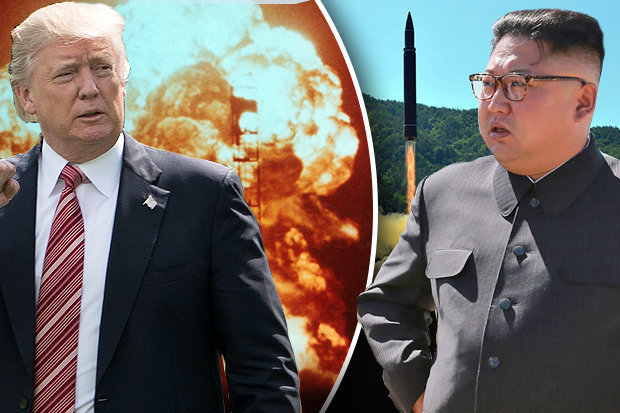 A nuclear or missile test from North Korea may lead Trump to a disastrous mistake. How great is the risk of war?

Is there going to be a war in Korea after the Winter Olympics in Pyeongchang? The games are going to begin this week on Friday. Until Feb. 25, they will overshadow the conflict-laden crisis that has been keeping the world in suspense. What is going to happen afterwards though? U.S. President Donald Trump is still undecided. He said, “We think the Olympics will go very nicely. And after that, who knows. … It’s a very tricky situation. … [M]aybe something good can come out of the Olympics.” But what if that is not the case?

In his long State of the Union address a couple of days earlier, Trump only spent a few sentences on the Korean crisis and especially denounced the “depraved character of the North Korean regime.” “No regime has oppressed its own citizens more totally or brutally than the cruel dictatorship in North Korea. North Korea’s reckless pursuit of nuclear missiles could very soon threaten our homeland. We are waging a campaign of maximum pressure to prevent that from happening. Past experience has taught us that complacency and concessions only invite aggression and provocation. I will not repeat the mistakes of past administrations that got us into this dangerous position.”

At the beginning of his administration, Trump had stated, “It won’t happen.” Will he strike out now?

The word “diplomacy” has not come up in his performances. Besides, shortly before the speech at the Capitol, the government had withdrawn Victor Cha’s nomination as the new ambassador to South Korea. The South Korea-born professor of Asian Studies at Georgetown University had previously been considered a fierce hardliner. However, he was appalled by the Trump administration’s ominous intent to keep “all options open, including a military operation.” “Force will be necessary to deal with North Korea if it attacks first, but not through a preventive strike that could start a nuclear war.”

According to Cha, it is only logical that Kim Jong Un would respond in kind if Americans carried out such an attack. He indignantly rejected the argument that it would be better for people to die “over there” than on U.S. soil. Not just because several millions of South Koreans are within the field of fire of 10,000 or 12,000 North Korean artillery pieces, but also because many U.S. citizens in South Korea and in America would also be in danger. Cha did not mince words: “The president would be putting at risk an American population the size of a medium-size U.S. city − Pittsburgh, say, or Cincinnati.”

Trump keeps biding his time. Nevertheless, a new provocation by Kim, like more missile tests or even a nuclear test, may lead Trump to a disastrous mistake − unless the ongoing detente between the two Koreas sets in motion a direct dialogue between Washington and Pyongyang as well. Admittedly, this requires that the U.S. give up on demanding North Korea’s complete denuclearization and settle for a double freeze instead — the freeze of North Korea’s nuclear program and of its nuclear weapons arsenal under the strictest international monitoring in exchange for the freeze of South Korea and the United States’ joint military maneuver.

We do not know whether Kim would agree to limit the development of his arsenal, which he views as his life insurance. Most importantly, it remains to be seen whether Trump and his advisers would be willing to relent. They do not see the North Korean dictator as a rational actor. They fear rather that he may use his nuclear weapons to blackmail America into distancing itself from its allies in Asia, and even sell them to other rogue states or non-state extremist actors.

Some observers see Cha’s dismissal as a clear indicator that the president is set on waging war. Meanwhile, according to rumors from the White House, he is not happy with the courses of action that the Pentagon has developed thus far. The most harmless option would consist in shooting down a North Korean test missile somewhere over the Pacific, but missing the target would be humiliating. Hitting a missile during its launch phase would be even more complicated. Employing the largest non-nuclear bomb would not necessarily result in a reliable and definitive destruction of Kim’s whole weapon arsenal and Northern production plants. The risk of a nuclear retaliatory strike would still exist. At any rate, a devastating response from the North Korean artillery is a certainty, as long as it cannot be destroyed with swarms of drones.

Victor Cha speaks of “lousy options.” He still stands by the classic strategy of deterrence and containment policy, though he believes it needs to be politically and technically strengthened.

For now, Trump waits and sees. “We ran out of road,” he says. “We have no road left.” He feels stymied. After the Winter Olympics, he will have to make a choice: either to pursue military violence − woe to us all − or rather to put the problem on the shelf of diplomacy, which would be a victory for reason. The military would be left with the task of buying time for diplomacy. The fact that no medals are awarded for that job does not make it any less meritorious.