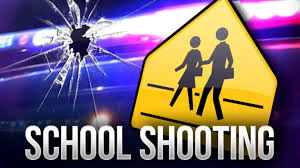 The most recent school shooting in the U.S. happened a few hours ago —within minutes, a 19-year-old boy called Nikolas Cruz came inside Marjory Stoneman Douglas high school, in Florida, activated the fire alarm and, in the ensuing chaos, killed 17 students and employees with a semiautomatic shotgun and “several munitions.” But to better understand why pretty much nothing changes in regard to American gun control laws, even when the victims of such shootings include dozens of kids and teenagers, one must look at what happened six years ago in Tennessee.

On July 23rd, 2012, the powerful pro-gun-ownership lobby group, the National Rifle Association (NRA), published a YouTube video supporting Courtney Rogers, an Air Force Lieutenant Colonel who was then running for elected office for the first time in her life: member of the Tennessee House of Representatives by the Republican Party.

To get there, Rogers had to beat her biggest adversary in the Republican Party primaries, Debra Maggart — who was the incumbent since 2004 and had participated in six House of Representatives special commissions. Not only did Maggart have vast political experience and electoral success, she also had the maximum grade attributed by the NRA to public office holders (an A+), a grade reserved to politicians who “not only have and excellent voting register in all matters critical to the NRA, but who also make a vigorous effort to defend and promote the Second Amendment.”

But that was not enough for the NRA. When their natural candidate, Debra Maggart, suspended a debate on legislation favorable to pro gun-ownership defenders, the NRA reacted furiously: it allied itself with the ultraconservative Tea Party movement to support the inexperienced Courtney Rogers and bombed Debra Maggart with articles comparing her to President Barack Obama. “While both say they support our Second Amendment rights, they both work against our freedoms behind closed doors,” said Chris Cox, leader of the NRA lobbying division, in a YouTube video. One month later, Courtney Rogers defeated experienced Debra Maggart and afterwards was elected to the House of Representatives, after predictably beating the Democratic candidate.

At first glance, the connection between this Tennessee story and the Wednesday shooting may seem dim, but there are several United States analysts who say it couldn’t be clearer.

“Who does not get a good [NRA] grade, especially among Republicans, can easily be defeated in the primaries by a candidate further to the right. And the NRA chooses and backs the right candidate for this task,” said journalist Mike Spies to NPR Radio, last October. Spies had been a finalist in the Livingstone Awards, a journalism prize, due to his coverage of the NRA campaigns in favor of ever more permissible gun ownership laws. “And they only have to do this once, or once in a while, to send the message,” said Spies — the message being that other Republican Party candidates must value their relationship with the NRA if they want to remain in politics. And, as seen by the 2012 Tennessee story, having an A+ grade is not enough; one must do absolutely everything the NRA wishes.

That’s why the Democratic Party, and especially among its more Liberal and Progressive voters, always accuses the Republican politicians of hypocrisy when they ask on social media for prayers for the victims of another shooting — be it in a school, a movie theater, a nightclub or an outdoors concert.

“Today is that terrible day you pray never comes,” wrote Senator Marco Rubio (R-FL) on Twitter a few hours after the Marjory Stoneman Douglas shooting. Shortly thereafter, several people flooded Rubio’s newsfeed with messages around a common issue: since getting involved in politics, Rubio, who is 46 years old, has received more than 3 million dollars from the NRA.

Every time another mass shooting happens in the U.S., especially when it happens in a school, the political landscape is divided between two camps.

On one side, there are those who claim it is time to enact stronger gun control laws, because one does not have to be a specialist to realize that there is a connection between the more than 300 million guns in the 320 million-inhabitant country, and the nearly 300 school shootings in the last five years. Wednesday’s was the 18th such shooting in 2018 and the second one this month, according to Everytown for Gun Safety; not all have been fatal, but in January a 15-year-old kid killed two colleagues in Kentucky and injured another 17, and two weeks ago a 12-year-old girl injured five colleagues in Los Angeles.

On the other side are those who defend the idea that it is unproductive to hold debates shortly after such a traumatic shooting like the one that happened Wednesday. It is an idea that comes up every time there is a shooting: 11 years ago, two weeks after Seung-Hui Cho killed 32 people at Virginia Tech university, Adam Gopnick, a journalist at the New Yorker magazine, wrote an article called “Shootings,” which started: “The cell phones in the pockets of the dead students were still ringing when we were told that it was wrong to ask why.”

“But the parents, and the rest of us, were told that it was not the right moment to ask how the shooting had happened—specifically, why an obviously disturbed student, with a history of mental illness, was able to buy guns whose essential purpose is to kill people—and why it happens over and over again in America,” wrote Gopnick back in 2007.

The numbers aren’t very kind to those who are on the camp that includes people such as President Donald Trump: between 2000 and 2013, more Americans have been killed in the U.S. by firearms than by AIDS, drug use, the wars in Afghanistan and Iraq, and terrorist attacks.

This Thursday, in a statement on the Florida shooting, Trump said many things, but none about gun control.

“It is not enough to simply take actions that make us feel like we are making a difference,” said the president, promising to prioritize “securing our schools” and “tackling the difficult issue of mental health.” There was no mention to the gun used by the shooter: a semiautomatic AR-15 — a civilian version of the M-16 military gun which has been used in several such shootings in the U.S. in the past few years and which has been praised by the NRA as a “customizable, trustworthy, and accurate” weapon that can easily be adapted with components that further increase its destructive potential.

The idea that it is necessary to wait for some time before debating policies to reduce the frequency of mass shootings, and the one that the main cause of these shootings is mental health issues, have both been presented on December 14th, 2012, when shooter Adam Lanza killed 20 kids in an elementary school in Newtown, Connecticut. Back then, President Barack Obama made emotional statements and a Democratic majority in the Senate — along with the fact that the victims were children — led everyone to believe that the situation would finally change.

But not even with a majority in the Senate, and with the respected Californian Senator Dianne Feinstein showing in Congress pictures of faces of those 20 children, the Democratic Party could remain united. They had 55 Senators, and while it is true that they needed 60 votes to prohibit the sale of assault rifles and of magazines with more than ten bullets, 15 of those Senators voted against the legislation, so that it was not possible to blame the Republican Party.

On June 19th, 2015, days after a shooting in a Tennessee military base which killed 6, British political commentator Dan Hodges made a post on Twitter which many people fear to be true, and that no optimistic speech made after this Wednesday should change: “In retrospect Sandy Hook marked the end of the U.S. gun control debate. Once America decided killing children was bearable, it was over.”