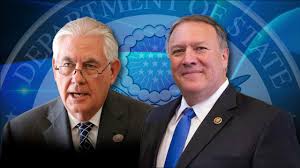 It was not surprising that President Donald Trump dismissed Secretary of State Rex Tillerson, as Trump has previously fired key staff in his administration over the past few months. Yet it is memorable that the firing was done over social media and implies that there are harsh consequences when Trump deals with opponents or those who oppose him on strategic issues. It is ironic: Tillerson leaves after 1 1/2 years of disagreement between the two men, which began during the presidential campaign and continued publicly throughout his appointment concerning sensitive international issues, when the U.S. State Department is usually considered an extremely close ally of White House policies.

For 15 months, U.S. policy has been a picture of instability, about which Trump has expressed his “disappointment.” He has consistently stated that his country’s foreign policy has practically become a branch of the Democratic Party. This is due to the decline of American presence on the regional and international stage, especially concerning the Middle East, and is an obvious indication of the disagreement between the White House and the State Department.

Even if the differences were secret, they are more severe than simply policy disagreements. For example, Tillerson described his boss as a “moron” after Trump called to increase America’s nuclear arsenal by a factor of 10 in response to Russian expansion last July, indicating the magnitude of the gap between the White House and the secretary of state. It is also an unprecedented expression of American foreign policy, as the two should have identical views.

There are several vital and sensitive disagreements concerning Washington’s foreign policy. First, Tillerson was not satisfied with the National Security Strategy of the United States when it was announced recently, but drew criticism for not reflecting diplomatic policies adopted by the president. The second difference emerged regarding the strategy toward North Korea and its nuclear program. Trump’s hawkish position was clear, whereas Tillerson advocated for a containment policy with North Korea. The third difference is Tillerson’s willingness to support the Iran nuclear agreement and to reject Washington’s withdrawal from the six-nation agreement. This specifically contradicts the president’s position, which was at the forefront of his election campaign. The fourth issue was that the two disagreed on policy regarding the Qatari crisis, which resulted from unbalanced policy toward other countries – the United Arab Emirates, Saudi Arabia, and Egypt – and which is also a central issue in White House foreign policy discussions. The fifth issue lies in another central promise of the campaign that Tillerson was not enthusiastic about: the president’s decision to move the U.S. embassy from Tel Aviv to Jerusalem.

As Tillerson’s tenure ends, Trump is forced to make decisions regarding the direction of his foreign policy. Trump has nominated CIA Director Mike Pompeo to succeed Tillerson. Pompeo is known for his extreme positions against religious and ethnic minorities in the United States, including Muslims, his opposition to the Iran nuclear deal, and for being reluctant to close Guantanamo. All of this points to an emerging foreign policy in the Middle East that will be completely different within the coming months, and will especially take aim at the framework of the Iranian nuclear agreement, which is often called the “deal of the age.”