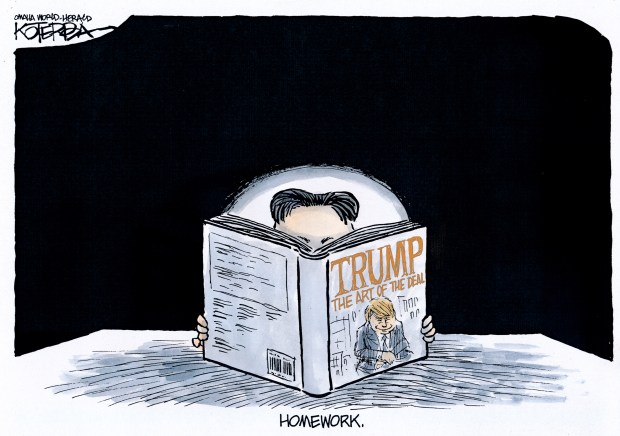 Kim and Trump are showmen with a sense for the dramatic and unexpected. This would make a summit exciting, but also risky.

This is really astonishing: The president of the United States, Donald Trump, accepted an invitation for a meeting with the North Korean leader Kim Jong Un. In my opinion, this is also a dangerous gamble and a bad idea. I cannot believe that I am saying this. Nicholas Kristof of The New York Times says that, for many years and after several visits to North Korea, [he is] calling for direct talks between the U.S. and North Korea. “It’s infinitely better that North Korea and the United States exchanges words rather than missiles,” Kristof wrote. If there is a choice between talks and missiles, I would choose talks, Kristof commented.

But the right way to hold a meeting is through careful preparation to ensure that progress is made toward reaching peace during the meeting, and to ensure, with certainty, that the summit would serve a higher purpose than simply giving legitimacy to Kim’s regime.

Kim and Trump are showmen with a sense for the dramatic and unexpected. This would make a summit meeting exciting, but it would also create higher risk if things go wrong.

For years, North Korean leaders have pursued international recognition, respect and trust; they want Americans to treat them as equals, and so an event in which Trump and Kim stand next to each other would constitute a triumph for Pyongyang. The North Koreans have been trying to establish direct contact with senior U.S. officials for a long time. They achieved this in the past when they demanded a visit by U.S. representatives (such as Bill Clinton after he was out of office) as a condition for releasing detained U.S. citizens.

So, the visit of a sitting U.S. president to North Korea would be a great gift to Kim, and it is puzzling that the great “master of the deal” is backing down so much from the approach he took at the beginning of his term. It is simply astonishing that Trump has gone from threatening to “totally destroy” North Korea in September, and then announcing that his nuclear button was bigger than Kim’s nuclear button, to planning a cozy summit. Under normal circumstances, the parties would first negotiate about organizing the meeting and ensure that the U.S. had received all possible concessions, and then ensure that the summit will serve the common goal of resolving the nuclear crisis.

This would mean sending diplomats to Pyongyang initially to carry out preparatory work and to see what agreement could be achieved, and of course to ensure the release of the three Americans detained in North Korea. It would mean sending National Security Advisor Herbert R. McMaster or CIA Director Mike Pompeo. U.S. Secretary of State Rex Tillerson would also be among the possible representative candidates, but Kristof says that the North Koreans have told him that Tillerson is not considered to be influential in Washington.*

Under normal circumstances, diplomats from both countries would prepare for the meeting over the next few months in order to clarify what could be achieved. However, by pledging to carry out his visit in May, Trump himself rejected any opportunity to assert influence and arrange negotiations. He is going to visit, and this is what the North Koreans badly want.

Frankly speaking, another concern about the summit between Trump and Kim is that the U.S. president may recklessly agree to any flighty scheme to reach an agreement. “’Withdraw the U.S. forces from Okinawa and South Korea? No problem, if you’ll build a wall for me,’” writes Kristof, alluding to what the summit talks might look like.

During certain meetings in Washington, Trump has entered into commitments followed later by his assistants having to explain that Trump didn’t really mean what he said. However, making a careless or foolish promise to North Korea would be much more problematic. When Trump imposed tariffs on steel and aluminum, we saw that Trump doesn’t always follow his advisers’ recommendations and that he does not seem to weigh his actions. North Korea poses a far more difficult problem.

In addition, the U.S. has to reassure its allies and partners in Asia, especially South Korea and Japan, that the U.S. would not abandon them as a result of any agreement with North Korea. Trump should include them in the discussions and planning.

However, it is encouraging that Kim has extended this invitation, that he does not object to the renewal of the U.S. military exercises and that he seems to be talking about terminating the nuclear missile tests. The last part is the most important: If Kim is ready to terminate the tests, it may be possible to reach an agreement.

Such an agreement would include the requirement that North Korea give up its nuclear program (and terminate all tests) in exchange for the U.S. lifting sanctions and normalizing relations. It would also require North Korea make certain commitments related to human rights.

The obvious question is whether Trump deserves recognition for motivating the North Koreans to make concessions, such as suspending nuclear tests?

The answer, in my opinion, is that perhaps he deserves credit on two counts.

First, Trump intensified economic pressure on North Korea by imposing additional sanctions and secured greater support from China. “[T]he pain was visible when I visited North Korea in September,” Kristof wrote. Kim is trying to make improvement of the standard of living the highlight of his leadership, and sanctions threaten the pillar of his legitimacy.

Second, Trump’s remarks about military strikes may or may not have shaken up North Korea, but they certainly terrified South Korea. The result was a skillful, diplomatic approach by the South to the North, which led to the North Korean promise to stop the nuclear tests.

So let us give Trump’s approach some credit, but there is sufficient reason to be skeptical about where all this is leading. No one has ever won money betting on North Korea’s moderation, and Kim may have unrealistic expectations about what the U.S. would agree to. If Kim believes that Trump would accept the withdrawal of U.S. troops from the Korean Peninsula, the summit may, hmm, explode.

Still, we really do not know what Kim’s expectations are, and a failed summit could lead to new escalation on both sides, leaving us worse off than when we started. Among experts, there is still speculation that Kim may want to carry out a nuclear event in the atmosphere in order to prove that his missile and nuclear programs work as he claims they do. It is possible to imagine that after a failed summit, he could conduct such an atmospheric nuclear test.

Regardless of all the uncertainty, we can envision the onset of improved relations between the United States and North Korea. The possibility of progress is exciting, but it may prove to be an impasse that leads to an abyss. I wish the journey had begun with detailed discussions on a national security adviser level, and only then had reached the point of scheduling a summit meeting, but at least this suggests that both parties recognize that the way forward is through negotiation and not tanks.