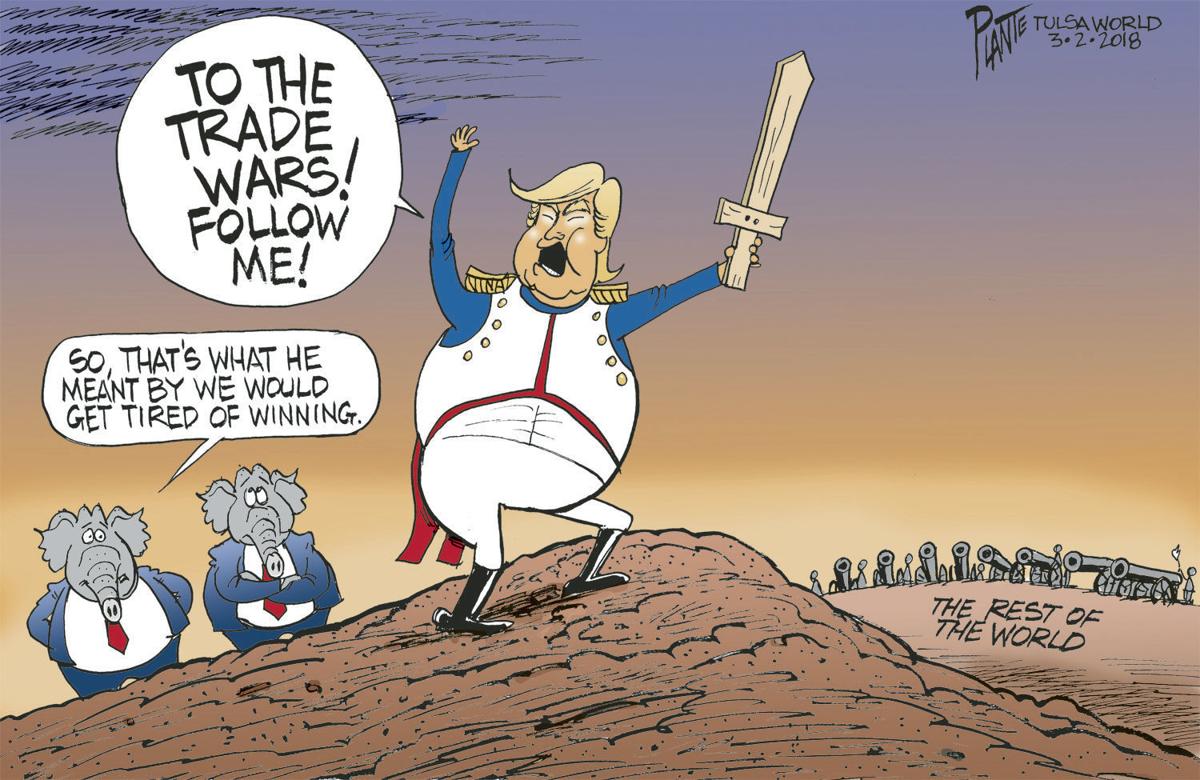 Donald Trump decided to fire the first shots of his trade war. For now, he is only shooting blanks. If a real shot is fired, there will be consequences, and they are not good for anyone. Perhaps the gods that Trump fears the most will eventually convince him otherwise.

The presidential announcement of the intention to apply tariffs of 25 percent on imported steel and 10 percent on aluminum to all countries was accompanied by the usual advertising on Trump’s favorite social network. “When a country is losing many billions of dollars on trade with virtually every country it does business with, trade wars are good and easy to win,” said the tweet. (https://www.reuters.com/article/us-usa-trade-trump/trump-tweets-trade-wars-are-good-and-easy-to-win-idUSKCN1GE1E9 ) He added, “For example, when we are down 100 billion dollars with a certain country and they get cute, don’t trade anymore-we win big, it’s easy.” (https://www.reuters.com/article/us-usa-trade-trump/trump-tweets-trade-wars-are-good-and-easy-to-win-idUSKCN1GE1E9 )

No, it’s not that easy. If the American industry imports steel and aluminum, it is because doing so is competitive and therefore more profitable for businesses. Tariffs may help local production of these raw materials, but they will penalize the business, as well as employment, of the companies that use them to produce other products. The American economy does not necessarily win, but actually, the contrary is true.

In a trade war, everyone loses. In the first place, there is always the possibility of retaliation measures, as the European Union has already threatened to do. And others will follow. The result will be a breaking of global trade and, with it, the economy.

It’s one thing to say that “only by insisting on fair and reciprocal trade can we create a system that works not just for the United States but for all nations” (https://www.reuters.com/article/us-davos-meeting-trump-speech/trump-warns-davos-on-unfair-trade-says-u-s-open-for-business-idUSKBN1FF0X3), as Trump said in Davos. Not all do it in a fair and reciprocal way, like China, for example, in steel and aluminum. Another thing is to impose general and unilateral measures of protectionism, as were was announced at the end of last week.

In fact, what Trump and part of his “entourage” advocate is a system that works only for his country and will impoverish everyone. “An eye for an eye will leave us all blind, and the world in a deep recession,” (http://www.independent.co.uk/news/world/americas/us-politics/trump-tariffs-recession-us-imports-aluminium-steel-world-trade-organization-warning-a8240941.html) Roberto Azevêdo, president of the World Trade Organization, warned this week.

The Republican Party has tried to calm down Trump’s protectionist enthusiasm; we will see how it works. At the moment there seems to be only one entity capable of dissuading the American president: the financial markets and their fears.