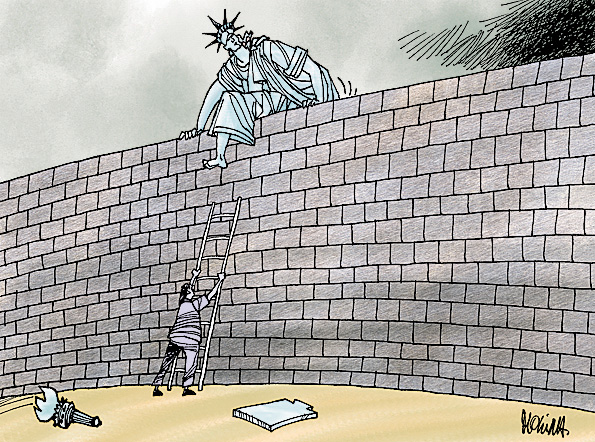 President Trump traveled to San Diego, California, to review models of the wall that will shield his country from the “bad guys” who enter bringing drugs and violence to an unsuspecting American society. Resorting to walls is not new; the Great Wall of China is the most famous. Its construction began 200 years before the birth of Christ, continuing until it stretched to 3700 miles in length at the beginning of the 17th century. Today, it is simply an impressive tourist attraction near Beijing.

During the 20th century, the Soviets wanted a wall to contain Berliners longing for freedom. Nowadays, that wall shares the same fate as the Chinese wall, except that the later one is overshadowed by the memories of years of oppression.

The wall that Trump promised to his supporters will be nothing but an extension of already existing sections at various points along the border. We are told that one section near Mexicali is already being expanded. The wall, which would be 10 yards high, would be roughly half the length of the Great Wall, stretching from the Pacific to the Gulf of Mexico,.

It is well known that the rich, whether they are countries or individuals, respond to problems by throwing money at them. Fulfilling Trump’s whim requires an investment of $25 billion; Congress, with all the votes of Republicans loyal to the president, only gave him $1.6 billion. The rest of the money will depend on very dubious public support. The Trump project seeks to end the flow of people and products toward the United States.

The insistence on constructing a wall is foolish because it aims to interrupt a flow of communication and travel that will never cease. There are thousands of North Americans arriving in our country of Mexico for vacation, or as residents in order to escape from daily stress and enjoy the countless attractions of all kinds. At the same time, there are millions of Mexicans who seek success and prosperity through immigration to our northern neighbor.

All of the aforementioned describe a phenomenon as much sociological as political, economic or cultural. We three countries that share North America recognize our respective cultures and histories as we develop. Canada recognizes the French part of the Americas. It is a bilingual country where there are still those who resist being absorbed into the Anglo-American way of life, and General de Gaulle’s speech from the balcony in Montreal still inspires referendums.* The contractual commitments inherited from their native peoples are respected in a very different manner than the treatment that the United States gave to its Indians.

The U.S. wants the proclamation that appears on the one-dollar bill to endure, which announces a New World Order established at the end of the 18th century, where new ways of living together in a community, of ruling without imposition and of serving the world prevail.

There are pronounced differences. They are not only ethnic. The cross-fertilization of the United States continues, prolonging the layers of European migrations that created their own coexistence until the massive arrival of entire Hispanic communities introduced a new stage in the social and psychological configuration of the country. The promising socio-political experiment, applauded at the time by 18th century philosophers, became the world power that today confronts an unexpected challenge in China, which, at the same time, represents a giant political, economic and social experiment, equally important as the North American experiment in the 18th century.

Clash of eternally utopian models or simple economic rivalry? International tension grows. One contender dreams of an absurd wall that weakens him from his heart, while his opponent – sage through millennia – waits and calculates the moment.

Mexico currently imagines that it will progress without discipline or effort, guessing the results of July 1 and going to the nearest mall.**

*Translator’s note: During a speech on the balcony of Montreal City Hall on July 24, 1967, French President Charles de Gaulle shouted “Vive le Québec libre,” which was the slogan for Quebec separatists. The Parti Québécois formed shortly thereafter and has worked since then toward an independent Quebec.