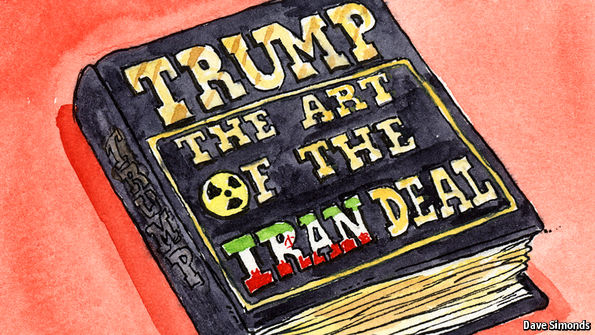 For the president, politics is a game based on lies and one-sided decisions.

Dangerous and chaotic, Donald Trump’s strategy for the Middle East seeks to meet two central goals: the restoration of the U.S.’s imperial role in the face of the Russia-Iran axis and, more significantly, clearly linking Israel with Saudi Arabia — sworn enemies of Iran — and turning them into key allies going forward. This Washington-Riyadh-Tel Aviv axis creates the conditions for rebuilding the entire Middle East under America’s leadership.

This is a return to the former containment strategy for Iranian nationalism (its modern version being Shia Islam), looming over Israel as a military vector, and reactionary Sunni Islam (Wahhabism) acting as a Trojan horse inside the Muslim world. It is also a blow to the strategic pivot toward Asia promoted by Barack Obama. If the gamble turns out to be successful, the U.S. could have decades of hegemony against Russia and Europe ahead of it. But to realize this challenge implies, as a prerequisite, the destruction of Iran, which is more complex than Trumpist warriors and ideologues believe.

The intention to denounce the nuclear agreement signed by the U.S., Europe, Russia, and China with Iran falls into line with this context, and it is only the first step in reaching those goals.*

Trump behaves as if he didn’t know perfectly well that Iran respects the deal — that there is no proof of its breach. But once more, the fiction of George W. Bush’s 2003 weapons of mass destruction against Iraq is reprised, with Benjamin Netanyahu playing jester. It is a criminal ploy aimed at manipulating world public opinion and making Saudi Arabia, which is destroying Yemen, the region’s main policeman, a role King Solomon would be easily willing to fulfill.

On the other hand, breaking the agreement means proving, once more, that Europe cannot aspire to play a role in the region (except to provide funds when necessary), and the trade war Washington has declared against Brussels has a dimension of geopolitical neutralization. This is how Trump’s latest rant should be understood: Europe was created to be against the U.S.

Israel, wanting to get even for its failure against Hezbollah in 2006, seeks to paralyze the aid provided by Iran to that Lebanese militia in order to launch another war. This explains the bombing of Lebanese militia positions and Syrian military facilities. The American president acts this way because, for him, politics is just, at its core, another version of the ultraspeculative capitalism he defends: It is a game based on lies and one-sided decision-making. In this worldview, politics is a mere form of struggle, just like economy and commerce. Diplomacy must cater to force, not replace it.

That said, in the Middle East, history lessons teach other truths; force can cause damage, but it is powerless against the people’s resistance. Against the country of the ayatollahs, the game of Trump’s permanent war may end up on the road to Calvary.

*Editor’s note: President Trump withdrew the United States from the Iran nuclear agreement, known as the Joint Comprehensive Plan of Action, on May 8, 2018. The 2015 agreement was signed by the permanent members of the U.N. Security Council (the United States, United Kingdom, Russia, France and China) plus Germany and the European Union.