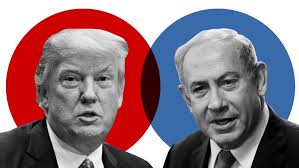 Never has an administration – not even a Republican one – been so close to the Israeli far right, which holds Netanyahu up as its main symbol.

The new connection in global diplomacy – which links Donald Trump to Benjamin Netanyahu – is responsible for promoting the greatest change in understanding among nations since World War II. Unfortunately, it has been for the worst. Since Israel was founded 70 years ago with the great support of the United Nations, Americans have worked to guarantee its existence. However, never has an administration – not even a Republican one – been so close to the Israeli far right, which holds Netanyahu up as its main symbol. He is a member of Likud, a far right religious party in Israel.

The newest additions to Trump’s administration, National Security Advisor John Bolton and Secretary of State Mike Pompeo, represent American radicalism, and were the pieces that were missing in order for Netanyahu’s radical agenda in the Middle East to move forward with American support.

Since 1995, Congress has officially supported moving the American Embassy from Tel Aviv to Jerusalem. Palestinians, however, wish to make Jerusalem’s western portion the capital of their state, which, if it’s up to far right supporters, will never even be created. Those supporters include the Palestinian far right inside Hamas located in Gaza who want Israel to be annihilated. That eliminates any chance of an agreement between both parties.

Despite congressional approval, no president – not even a Republican one – has gone ahead with the move. Trump, Bolton and Pompeo did so, and, on Monday, the official opening day for the embassy, 59 Palestinians died in clashes between disproportionate forces. Trump’s envoy for the opening was his daughter and top adviser, Ivanka, alongside husband Jared Kushner, who is also a Trump adviser, a conservative Jew, and very close to Netanyahu. Americans have recognized Jerusalem as Israel’s capital without a single attempt at negotiations that could bring both sides closer to the peace agreement Trump has been hyping. His actions don’t match his words.

We can’t accuse Trump of not doing what he promised during his campaign. And that is an issue, since the planet has become subordinate to this American isolationism, conditioned to think the way Midwestern voters think. Buckle up. This is how Trump’s United States invests against carefully built international agreements with historic allies. The most recent example of that is the understanding reached to freeze Iran’s nuclear weapons program – a program which was obviously operated for military purposes – built step by step during President Obama’s term alongside France, Germany, England, Russia and China. Even after the International Atomic Energy Agency confirmed that the Iranians were, in fact, abiding by the deal, Trump withdrew his part in it – much to the joy of Netanyahu and the enemies of Shia Tehran, especially Saudi Arabia. The result is not only an incentive for the Iranians to resume uranium enrichment to build weapons, but there is also a rupture in the Atlantic Alliance, which was signed by the United States and Western Europe after their victory against the Nazis in World War II. That is no small thing.

The historic contact with North Korea is a score for the Trump administration indeed. But who is to say that the White House’s disregard for deals is not being watched by Kim? Be that as it may, every terrorist group that relies on the Middle East’s recklessness in order to take action in that region and in the rest of the world is grateful.