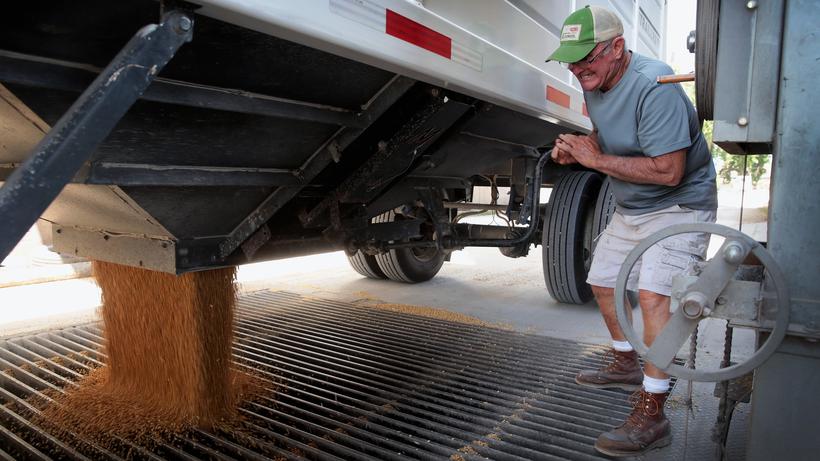 Jason Swede is worried. On his farm near Rochester, New York, the American grows corn, wheat and above all, soy beans. He generates around $4 million a year and now has 10 employees. More than 60 percent of the soy is exported, mostly to China. “China is by far the largest export market for us,” says Swede. China uses soy mainly as animal feed or processes it into food. But the farmer doubts whether he can continue to rely on China. “If the tariffs are maintained, we will lose this market,”* he says.

Demand has been falling ever since China first introduced 25 percent tariffs on soy from the U.S. in April. Some of his customers report that the price for a bushel of soy (approximately 35.2 liters or 60 pounds for a bushel of soy) has fallen in some cases by up to 20 percent. “This is a disaster for U.S. producers,” says Swede, who is also chairman of the New York Corn and Soybean Growers Association, the umbrella organization for the regional corn and soybean farmers.*

The trade dispute between the world’s two largest economies has been escalating in recent days. Last week, the White House announced that it would impose import duties worth $50 billion on Chinese goods. That’s how Donald Trump wants to encourage Beijing to abandon controversial trade practices that, according to the Americans, give it an unfair competitive advantage.

China then announced it would introduce duties on U.S. products worth $70 billion. Trump countered this with an announcement that he would impose further duties on Chinese goods worth $200 billion. He reserved the right to increase tariffs even further. If this were a schoolyard fight, as NPR commented, Trump would have just pulled out a switchblade.

For the president, the tariffs are above all an instrument with which to fulfill his campaign promise of “America First” and to correct the alleged trade deficit with China. He argues that Europe and Asia have been stimulating their own economies at the expense of the U.S. for far too long. Trump speculates that the government in Beijing can hardly react in view of a trade surplus of $375 billion: What else is there to charge import duties on? China, it is believed, is more dependent on America than the other way around.

But many U.S. companies are afraid of becoming the sacrificial lamb in a trial of strength between Washington and Beijing. The Business Roundtable, one of the most influential economic lobby groups in Washington, concedes that it shares the president’s concerns about Chinese business practices: “Risking a potential trade war is the wrong way to fix these problems,” the group says. In the end, the Trump administration’s tough stance toward China could harm the U.S. because Beijing knows the weak points of the U.S. economy. China’s retaliatory tariffs primarily target agricultural products such as meat, milk and cereals, but also the energy sector and the car industry. The Chinese government is thus primarily affecting those regions that overwhelmingly voted for Trump in the presidential election.

China is the Largest Buyer of Pigs’ Feet from the US

Last year alone, the Chinese imported agricultural products worth $24.1 billion from the United States. Agricultural products account for about 20 percent of total imports. China is by far the largest buyer of pig’s feet, offal and other leftovers from the American meat industry: Americans exported 416,000 tons worth $874 million in 2017. Industry analysts warn that ever since the first customs round in April, deliveries to China have almost come to a standstill.

The American coal industry also fears retribution from the Far East. After the election, Trump promised to revive the industry – and indeed, the U.S. increased its coal exports to Asia by 61 percent last year alone. Since Trump’s predecessor, Barack Obama, lifted the export ban on crude oil, China has even become the third largest customer after Mexico and Canada. After the introduction of tariffs, however, it is becoming increasingly difficult for U.S. companies to plan with the Asian market in mind.

This could have serious long-term consequences since the dispute with China threatens the appeal of the U.S. as a production location for foreign manufacturers. As recently as Thursday, the Daimler Group issued a profit warning for the current fiscal year. In the first quarter, the Stuttgart-based company had still reported record figures, mainly thanks to deliveries of SUVs from U.S.-based factories to China. But now Daimler is warning that because of the new import duties, sales in China will decline, and the rising costs cannot be passed on to the customers. According to analysts at the company Evercore,** BMW, the largest car exporter in the U.S. in terms of export value, can expect a loss of $965 million due to the tariffs. Last year, the German car manufacturer exported 100,000 vehicles to China from its plant in South Carolina alone.

Even the Closest Allies are Issuing Warnings

In view of reactions from China, the influential U.S. Chamber of Commerce is convinced: “This is not the right approach.” In the end, American manufacturers, farmers and consumers will bear the brunt of this trade dispute. Generally, the Chamber is a reliable ally of Republican presidents. Even Gary Cohn, the president’s influential economic adviser until April, warned last week that a trade war with China could obliterate the profits from the U.S. tax reform. “We support the president … But … we’re concerned because agriculture is on the front line of this trade war,” says Republican Rep. James Comer from Kentucky, where agriculture is an important economic factor.

On the other hand, Trump is also receiving unexpected support. “[The president’s] actions on China are on the money,” says Democratic Sen. Chuck Schumer, usually one of the president’s most vocal critics, continuing, “China is our real trade enemy.” By stealing intellectual property and competing unfairly, China is endangering millions of U.S. jobs. His criticism is not entirely unselfish: as a senator from New York, Schumer is not only responsible for the liberal metropolis, but also for the farmers in the north. And he’s not alone. Sherrod Brown, the Democratic senator from Ohio who is facing voters in November, also called the tariffs an “important step toward … making clear the U.S. will not allow China to cheat Americans out of their jobs.”

Swede, the soybean farmer, can understand the criticism of China, but for the time being he has other concerns. “We’re kind of trying to stay in the black,” he says. For example, the farmer fixes the prices for his deliveries at an early stage in order to protect himself from further price collapses. And he hopes that in an emergency there will be insurance for U.S. farmers. “If I’m lucky, by then both parties will realize how important they are to each other.”*