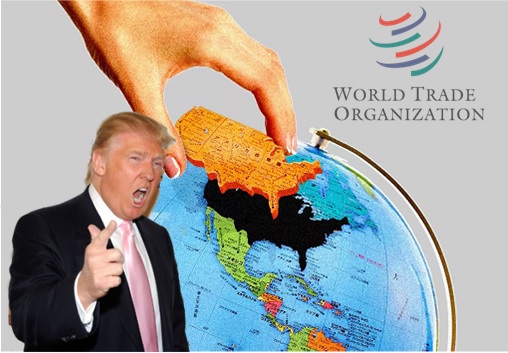 Donald Trump’s tariffs on steel and aluminum at first elicited sharp criticism from the countries of the world, and after that retaliation. First, the European Union imposed retaliatory tariffs on goods exported from the U.S., and now Russia has filed a case against the U.S. with the World Trade Organization, which has only amplified talk about Washington’s exit from the WTO. Aktualnye Kommentarii asked economist Sergey Khestanov how a U.S. withdrawal from the WTO poses a threat to it and what Russia will achieve by filing a lawsuit.

Most likely, it (Russia’s suit brought in the WTO against the U.S.) was filed not with the aim of achieving something, but to show, just by filing the suit, dissatisfaction with the situation that’s developed.

Will the U.S. leave the WTO? Here there’s quite a lot of intrigue. The odds are roughly 50-50. The fact is that since the start of the 2000s, the WTO has increasingly contributed to the development of a negative U.S. balance of payments: The U.S. has been buying far larger amounts from other countries than it sells U.S. goods back to them. There’s an imbalance, a mismatch, a deficit − it can be called different things.

The significance of this phenomenon is simple and plain. It began to form long ago, starting in the 1960s and 1970s, but it became strikingly apparent at the beginning of the 2000s. China joined the WTO, and from that moment on, the deficit began to grow. The biggest U.S. deficit is with China; the EU is in second place.

It was a problem, and a lot of people talked about the problem but didn’t do anything. Basically, Trump’s initiative was the first initiative aimed at solving the problem. But he went about solving it in his thoroughly “cowboy” style: first tariffs, then negotiations, then the negotiations don’t take, so more tariffs, and so on.

Against this backdrop, the chances the U.S. will leave the WTO are not so insignificant. The WTO itself as an organization is rather young. The reduction of tariffs that the WTO ensures isn’t so great compared to previous reductions. Even if we assume the U.S. will leave the WTO, it won’t lead to any particular kind of catastrophe. Trade turnover will be slightly reduced, and markets will be somewhat isolated, but if we set aside the past 20 years, the entire history of economics following the industrial revolution existed under conditions where international markets were quite severely isolated due to tariffs.

Even if it happens, no particular catastrophe will occur. Will the usual structure of financial relations be ruined? No. There’ll be changes, but the scale of the changes shouldn’t be exaggerated. For many decades, the normal level of tariffs between countries was somewhere around 20 percent. Against this backdrop, what Trump wants to do is quite modest. It’s quite a tough problem for many businesses, but it’s by no means a catastrophe.

About Jeffrey Fredrich 190 Articles
Jeffrey studied Russian language at Northwestern University and at the Russian State University for the Humanities. He spent one year in Moscow doing independent research as a Fulbright fellow from 2007 to 2008.