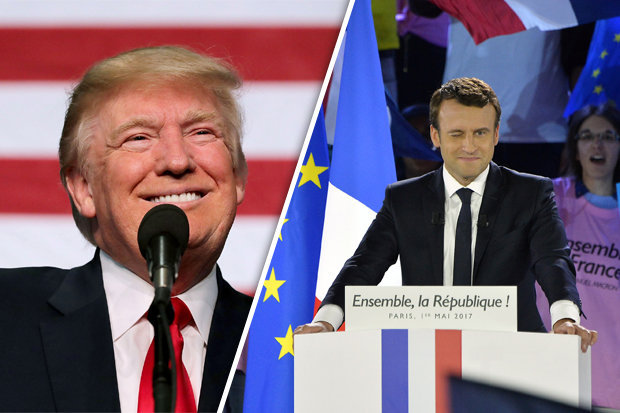 The maxim “divide and conquer” comes to mind. Had Donald Trump been a devotee of classical studies, that might have given him the inspiration for the tactic he seems to be employing against the European Union, which he now frequently depicts as one of his sworn “enemies.” In the case of the EU, his strategy of disrupting international alliances and institutions that might damage or encumber his “America First” policy alternates between violent attacks and efforts to create tension and drive rifts between the European countries, thereby weakening any front that might oppose America’s populist nationalism.

He carried out his moves quickly, one after another: Trump’s support of Brexit was known even before his election, when he welcomed the success of the British referendum to leave the EU and promised bilateral economic agreements. What is less known but which is now coming to light is that the American president allegedly offered a similar deal to France during recent conversations with French leader Emmanuel Macron. According to The Washington Post, Trump reportedly asked Macron, one of the firmest supporters of the European Union, “Why don’t you leave the EU?” Trump then went on to claim that his administration would be willing to offer Paris better terms compared to the ones that are in place while France stays in the EU.

When it comes to Trump, it is definitely difficult to tell policy from provocation; to distinguish the tirades meant to whip up a domestic audience – a noisy minority that responds to his populism on delicate subjects ranging from trade to immigration – from the stances that precede actual plans. However, it is impossible to ignore the common thread of contempt and undermining of traditional agreements and multilateral deals, as well as the lack of respect for historical allies, respect that used to be one of the pillars of Washington policy.

This trend may become increasingly more evident based on the upcoming tests the White House faces. Trump is busy searching for a new chief of staff, as John Kelly may leave his post this summer, indeed, in just a few days. This event will trigger a Cabinet reshuffle concerning the office that wields the most influence when it comes to organizing debates, gathering information and determining positions that form the basis for the president’s decisions in both domestic and international matters.

The two likeliest contenders are faithful ultraconservative representatives: Director of the Office of Management and Budget Mick Mulvaney, and Nick Ayers, chief of staff to Vice President Mike Pence. However, neither is in the habit of encouraging open discussion. In July, especially, Trump is supposed to visit Europe for the NATO summit, NATO being another pillar of the West that Trump has repeatedly attacked (during the last Group of Seven leading industrial nations meeting in Canada, he allegedly stated that NATO is “as bad as NAFTA.”)

Following the NATO meeting is Trump’s first real summit with Russian leader Vladimir Putin. Despite the fact that Putin is an adversary responsible for destabilizing European and American politics, Trump insists on treating him with kid gloves. Finally, Trump will welcome Italian Prime Minister Giuseppe Conte at the White House at the end of the month. The American president’s congratulations to the Italian government, mainly for its anti-establishment characteristics, set the atmosphere for this meeting.

Moreover, it is impossible to forget the centrifugal pressure generated by unilateral American action that has already openly clashed with hitherto collective European needs and priorities: from global tariffs on steel and aluminum to the withdrawal from the nuclear agreement with Iran. Trump has condemned the European car industry, showing particular aggressiveness toward the Germans as well as open animosity against Chancellor Angela Merkel, another staunch defender of the EU, and threatened to impose a 20 percent tariff on imported cars. The very harshness of his attacks may be interpreted as an invitation to leave the EU aimed at some of its more reluctant members.

Recently, he has not refrained from statements denouncing the EU. For example, during a rally in North Dakota, he even claimed that it was “set up to take advantage of the United States,” a further signal of the escalating conflicts meant to tear the EU apart. The intensity of these controversies has even prompted some observers from the U.S. to wonder about the long-term damage to the trans-Atlantic alliance, which in the past has survived major disagreements over the Iraq War.