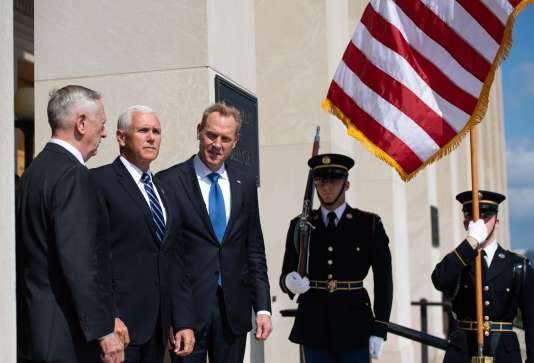 On Thursday, Vice President Mike Pence announced the creation of a “space force,” separate from the Air Force.

Thirty-five years after Ronald Reagan and his “Star Wars” plan, Donald Trump has put space back into the heart of America’s strategic concerns. “It is not enough to merely have an American presence in space. We must have American dominance in space,” the president said in mid-June. On Thursday, August 9, when addressing a room of Pentagon generals, Vice President Mike Pence announced the creation of a “space force,” separate from the Air Force. For the moment, however, the Pentagon should limit itself to establishing a “space command” following the model of its geographic and thematic commands, such as Centcom (U.S. Central Command) for the Middle East or Stratcom (U.S. Strategic Command), which is responsible for nuclear weapons.

The efficacy of armed forces on the ground is increasingly dependent on geolocation and satellite security. Now more than ever, terrestrial orbit is becoming a potential conflict zone and represents a major strategic challenge. Furthermore, the number of players likely to become military powers in space has increased noticeably. “Other nations are seeking to disrupt our space based systems and challenge American supremacy in space,” Pence said.

In the Cold War era, only the USSR was capable of being a true rival on the ground. The missile defense system project launched by Reagan at the end of the 1980s forced an already struggling Soviet Union to throw themselves into a new arms race, which was economically fatal and contributed to its collapse.

Vladimir Putin’s Russia, despite having a GDP barely higher than Italy’s, has once again become a space power, including in a military sense, as seen with its 2014 launch of the Kosmos 2499 satellite (which deliberately changed its orbit to get closer to a drifting rocket) and March’s announcement of the launch of a hypersonic missile, which travels many times faster than the speed of sound and can escape missile defense systems.

The United States Is in Direct Competition with China

The main challenge is perhaps from China. As early as 2007, Beijing had destroyed one of its old satellites with a missile launched from Earth. A major step was taken on August 3 when China announced the successful launch of a hypersonic missile.

A few weeks out from the mid-term elections, this space theme is also a political choice for a president elected in the name of “America first” and who, since his election, keeps claiming that he wants to “make it great again.” Trump’s campaign team is already asking the president’s supporters to give their opinion on the future space force logo. Despite his current economic success and peaked popularity amongst Republican voters, Trump knows that the game isn’t over. And what could be more inspiring than the relaunch of space conquest, that “new frontier” outlined some 60 years ago by John F. Kennedy and that’s image remains powerful in the American imagination.

Trump has increased NASA’s budget and ordered them to return to the moon but also to prepare themselves for a mission to Mars. In the race to the red planet, the United States is in direct competition with Xi Jinping’s China, which has resolved to assert itself as a great world power, including in space conquest.