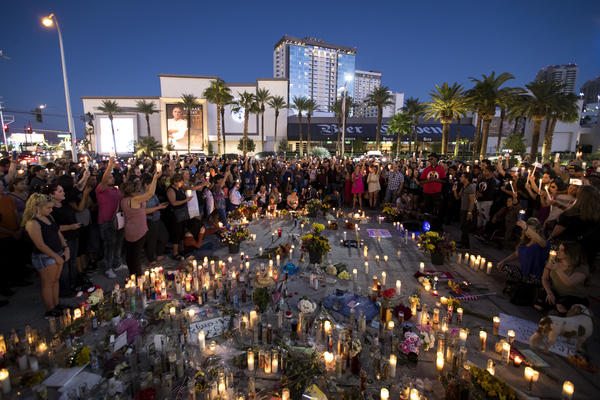 A year after the bloodbath in Las Vegas, states in the U.S. made their weapons legislation both more strict and more flexible. The midterms will be decisive.

Within 24 hours, the blood banks in Las Vegas had enough in stock to help the several hundred wounded. Later, doctors offered to help with scars for free. Some $32 million dollars was collected for survivors and the injured.

Las Vegas helped massively last year in the hours and days after Stephen Paddock shot and killed 59 attendees at a country music concert from the 32nd floor of the Mandalay Bay Hotel this Monday one year ago. More than 500 visitors were injured. The motive of the shooter is still unknown.

In the year after this largest ever mass shooting, Las Vegas received a lot of help, but not stricter weapons laws. A previous measure, adopted by the people through a referendum and which tightened background checks for private weapons sales, was blocked by the Nevada State Attorney General Adam Laxalt because of impracticability. Laxalt, who spoke at annual meetings of the National Rifle Association, is now the Republican candidate for governor.

More than a month after Las Vegas, the next massacre took place in a small church in Sutherland Springs, Texas, leaving 26 dead. In February, a school shooting in Parkland, Florida, claimed 17 lives. Youth from this community managed to establish a resistance movement against weapons. In March, hundreds of thousands of Americans took to the streets, the largest anti-weapons protest in a generation.

Was there a legislative change after this? Not nationally. After “Vegas,” there were calls in Congress to ban bump stocks, the accessory with which Paddock enhanced the firepower of 12 of his 23 weapons. President Donald Trump tweeted support of this. The idea stalled in Congress.

At the state level, there was some movement, even in states with a Republican administration, as shown in a survey by the Associated Press. Unlike Nevada, Florida did take action. The state banned bump stocks, increased the age to purchase semiautomatic weapons from 18 to 21 and adopted the so-called Red Flag Law. This law makes it possible, via a court order, to take away a person’s weapons when the environment in which they are to be used is believed to make them a danger. Eight other states banned bump stocks this year, and seven more states adopted a “red flag law.”

The pattern of last year resembled that of 2012 after the shooting in Newtown, Michael Hammond, legislative counsel for the pro-gun lobby, Gun Owners of America, told AP. “The anti-gun states became more anti-gun and the pro-gun states became more pro-gun.” Republican states like Tennessee, Oklahoma and Nebraska expanded their weapons laws in 2018. Meanwhile on Friday, the Democratic state of California, already strict with regard to weapons, banned the sale of guns to people under the age of 21, and prohibited gun ownership for people hospitalized with a mental disorder and by perpetrators of domestic violence.

Yet, there is a real chance that 2018 will be a year of reversal after the midterm congressional elections in November. Proponents of restrictions on weapon possession now have the tide turning in their favor. For a long time, this was different. Under President Barack Obama, who wanted to contain guns, gun fanatics were the most motivated to vote. For years, this contributed to Republican victories at lower levels of government, and thus to an expansion of weapons legislation. At the same time, there was an increase in the number of mass shooting incidents and they were increasingly more lethal. This has now ensured large public support for better background checks, and reintroduction of the ban on semiautomatic weapons.

With Trump in office, paralysis in Congress and mourning for the many casualties still fresh, it is now the opponents of weapons who are utterly motivated to vote pro-gun candidates out of office.

The marches organized by Parkland students this spring have, with the help of Democrats and anti-weapons groups, culminated in coordinated actions to get progressive young people to vote. The number of registered voters between the ages of 18 and 29 has grown substantially in swing states (e.g., Pennsylvania, Florida).

Where anti-weapons groups never came close financially to the powerful and industry-funded NRA weapons lobby, they are now somewhat catching up. In three Virginia elections last year, more money came from the anti-gun lobby Everytown for Gun Safety than from the NRA, resulting in three Democratic victories.

In recent months, Billionaire Michael Bloomberg, the founder of Everytown, has invested at least $15 million in recent months in anti-gun candidates, including Steve Sisolak, the Democratic gubernatorial candidate for Nevada. Sisolak is embroiled in a tight race with Adam Laxalt, the man who blocked better background checks in Nevada. Sisolak wants to expand background checks, adopt a Red Flag Law and ban bump stocks.