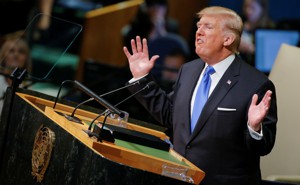 Donald Trump likes to boast that thanks to him, international sanctions have been levied against North Korea and that it is these sanctions that have forced Kim Jong Un to come to the negotiating table, though he is not yet seated at the table. Even if these sanctions have played a role, it is still the case that the world would not be here had the new president of South Korea, Moon Jae-in, not extended his hand to Pyongyang, fully aware of the risks and perils, to remove the peninsula from its stalemate of nuclear braggadocio by an all-out effort of appeasement and reconciliation. One can only hope that the “Moonshine diplomacy,” which Moon has applied for a year, continues to bear fruit. Trump may continue to hawk his alternative facts as he pleases, but it does not mean that Kim is any closer to obeying U.S. pleas to denuclearize, despite making certain concessions.

As he becomes increasingly less credible on the international scene and increasingly more dangerous, Trump has persisted along the same lines, appearing at the U.N. General Assembly during its annual meeting on Tuesday to reaffirm the need for his campaign of maximum pressure against the Iranian regime. Without apparently realizing his incoherence and the contradictions with his rhetoric of anti-multilateralism, he has called on “all nations” to isolate Iran. This man became president nearly two years ago. He is lucky that derision does not kill.

Decades of sanctions against Iran, however, have shown that containment strategies have done nothing but impoverish its people and strengthen the hardline factions within the Islamic regime. Trump’s repudiation of the nuclear treaty with Iran does not improve international relations; it poisons them.

This is to say that, with regard to the world’s complexity, Trump has no other project than applying a veneer to the law of the strongest. In the Middle East, as elsewhere, he plays the games of the dictators, those in Saudi Arabia and Iran, by encouraging the Israeli right and extreme right to follow their own agenda of plundering Palestinian lands. And from this ignorance, beyond the perfectly contemptuous disregard that he shows for international institutions, there follows a total indifference towards the humanitarian crises his alliances have incurred. In the case of the one with Riyadh, he turns a blind eye to the fate of five million children currently threatened with starvation in Yemen.