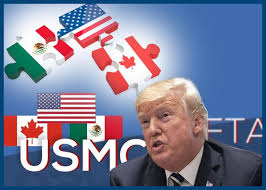 The trade deal between Canada and the United States is primarily a victory for U.S. President Donald Trump, but also for the Ontario auto industry, which will see the threat of a 25 percent tariff on its exports disappear.

By requiring that more cars that are sold duty-free in the United States be made from parts that are predominantly made in North America, a large percentage made by workers earning at least $16 per hour, the U.S. has recognized the importance of integrating this industry, while limiting the risk of relocation to Mexico.

Ontario is the only major Canadian winner of this deal. As Ottawa wanted, it will be able to continue to export, and even increase its car exports by 40 percent, duty-free.

Overall, it is clear that Canada has mostly avoided the worst, but the gains realized by Washington are, on the whole, quite modest. For Canada, the disappearance of Chapter 11, which allowed U.S. companies to sue when they felt aggrieved by a government decision, is a good thing. Because of this NAFTA provision, Ottawa has had to pay over $350 million to American companies over the years.

Among the important clauses that have been retained despite the Americans’ initial desire to abolish them are the cultural exemption and the dispute resolution mechanism, the famous Chapter 19.

The cultural battle has not yet been won, as increasingly more kinds of work are leaving traditional platforms (movies, television, etc.) for broadcast on the web. As for dispute resolution, it would have been suicidal to let American courts settle disputes based on their own interpretation of this trilateral agreement.

That said, while the United States-Mexico-Canada Agreement puts an end to the climate of uncertainty surrounding trade relations among the three countries, there are several setbacks for Canada, starting with the need to renegotiate the agreement in 16 years. In the pharmaceutical arena, Canada has agreed to extend the patent term for new so-called organic product lines, which will delay the arrival of generics to the market and increase prices.

Ottawa wanted to promote cross-border mobility in the professional workforce, but the United States refused. It wanted to exclude Canadian companies from the Buy America Act; it failed.

There is nothing to prevent Washington from using the national security argument to impose special tariffs, as it did for steel (25 percent) and aluminum (10 percent). The parties may be able to negotiate their elimination in exchange for export quotas, but guess who will have to respect these quotas?

Nothing in the agreement fixes the softwood lumber dispute, which has been going on for decades. In agriculture, supply management has been protected, but at the cost of greater openness in the Canadian market for milk, eggs and poultry. Under the agreement, U.S. producers will now have access to 3.6 percent of the Canadian milk market and will be able to resume the sale of milk protein halted two years ago by an otherwise highly questionable decision of the Canadian Dairy Commission. This will increase the presence of foreign products on our shelves to nearly 20 percent.

On Monday, all the political parties in the Quebec election campaign denounced this important concession, despite Justin Trudeau’s commitment to compensate producers. They are right to do so, because milk producers, 50 percent of whom are from Quebec, are the ones who have the most to lose in this new agreement. But to be honest, it must be recognized that the essentially defensive behavior adopted by the industry and the governments over the last 25 years has led this industry into a cul-de-sac. The supply management system is increasingly difficult to defend for a country fighting protectionism and demanding tariff-free access to foreign markets.

Contrary to what Prime Minister Trudeau says repeatedly, the USMCA is not a win-win agreement. We saved the furniture, nothing more, and it is mostly agriculture, wood, and aluminum from Quebec that will pay for the Trudeau government’s priorities.