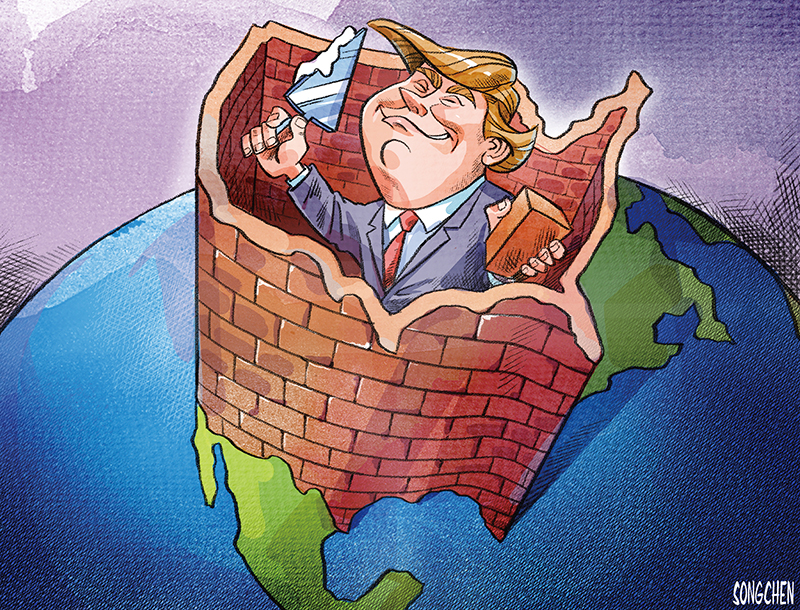 The United States can’t maintain its dominance, since a rival like China has emerged, making it impossible to preserve its unilateral dream.

His first battle cry, with which he made it to the White House, was “America first,” but that cry soon became “America alone.” A few days ago, at the United Nations, the American president’s isolationist position clearly took shape. In a half-hour speech he challenged the U.N. itself, along with NATO, the World Trade Organization, the International Criminal Court and the Human Rights Council. “We reject the ideology of globalism, and we embrace the doctrine of patriotism,” he said. For Donald Trump, “the … powerful love for your nation, the same intense loyalty to your homeland” is what will make “nations greater, our regions safer, and the world better.” Trump’s key concepts are “sovereignty and … independence,” which according to him have made possible an environment in which “freedom has ever survived.” And, in case it wasn’t clear, he added: “We are only going to give foreign aid to those who respect us and, frankly, are our friends.” In fact, last August he decided to cut off all American contributions to the U.N. Refugee Agency. All of this represents a total opposition to multilateralism and an absolute rejection of Barack Obama’s legacy.

Soon afterwards, at the U.N., French President Emmanuel Macron took on the role of Trump opponent, calling on the world to build a new global order based on multilateralism. Macron responded to Trump − without mentioning him by name − by saying that globalism is compatible with sovereignty and that, furthermore, it is an essential requisite to fight the inequalities that damage globalization. “I don’t believe in an empty, general globalization,” Macron said, “but I do believe in universal values,” and he cited human rights, the dignity of individuals and gender equality. This new global order “with a human face” must be based on a multilateralism that is compatible with sovereignty. This is why, he made clear, “I will never stop defending sovereignty, even when nationalism brandishes it as a way of attacking others.” Because the old world order, he concluded, has failed “due to its inability to respond to the unequal distribution of wealth,” which has led to the emergence of populist movements and an excluding form of nationalism. In conclusion, a new global order, a new global balance based on the principles of sovereignty, regional cooperation and international guarantees, must be propelled forward.

Herein lies the question: on the one hand, isolationism, protectionism and unilateralism; and on the other hand, globalism, free trade and multilateralism. These choices were weighed in the United States after the fall of the Berlin Wall and the Soviet Union − whether to promote, as “primus inter pares” (first among equals) the creation of an international judicial order expressed through laws and embodied in institutions (building on the already-existing ones, such as the U.N. and the International Criminal Court), or to opt for preserving America’s world dominance with a foreign policy at the exclusive service of the defense of America’s interests. The latter option was already chosen under the Clinton administration, but was consolidated and made clearer after the attack on the Twin Towers.

Now, in all orders of life and history − which is the life of peoples − things are the way they are and not how we would want them to be. The United States can’t maintain its dominance, since a rival like China has emerged, a rising power that makes it impossible to preserve its unilateral dream. A situation that makes one think of the start of a new historical era of bipolarism similar to the Cold War era, in which the old confrontation between the United States and the USSR will be replaced by tension between the United States and China. The isolation and protectionism promoted by President Trump are the clearest manifestation of the retreat of the United States, which, unable to impose its will unopposed in the rest of the world, looks inward and boycotts all multilateral routes.