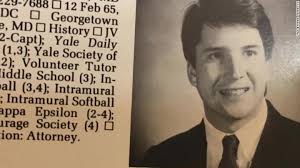 Brett Kavanaugh fits the frat boy profile so well that he almost looks like a caricature.

I’ve met men who are just like Brett Kavanaugh was: 20-year-old spoiled boys who get drunk until they pass out, and who, along with their friends, rape girls who wouldn’t expect their peers, coming from good families, to be capable of such brutality. I’ve met men who are just like Kavanaugh was because I’ve had them in my classroom, they’ve been my students, I’ve seen them walking down the university campus and arrogantly claiming every tile, step, library chair, classroom, the university canteen – every inch of public space – just because they’ve been taught that, due to their background, race and status, everything belongs to them, even the people who’ll work for them in their daddies’ businesses or the women who sit by their side, or walk on the campus, or go to one of their fraternity parties or who will become the mother of their children someday.

I worked for 13 years as a teacher at the University of Pennsylvania, a private university where the fraternity system was the main residential and social life option for students, and where tuition is almost $60,000 and there were almost no students who weren’t white or had a scholarship. In such universities, Kavanaughs abound, maybe even more so than in elite universities such as Yale, where there are campaigns aimed at recruiting brilliant students among racial minorities. Kavanaugh fits the frat boy profile so well that he almost looks like a caricature. The stereotype would seem ridiculous if not for its sinister implications.

The rape culture in fraternities is not encouraged by a few boys who go too far at a party after drinking too much. Rather, it represents a wicked power relationship between men and women that’s based on extremely violent machismo. For instance, it is common behavior in fraternities to adopt “litter sisters.” Seniors in fraternities recruit attractive freshman girls and “adopt” them so they can take part in their activities and, especially, go to their parties, where they’re forced to participate in their rituals in which alcohol is consumed abusively and drugs which overcome willpower are distributed. These girls are bait used to attract new fraternity members. In exchange, the girls, 17 or 18-year-old teenagers, feel like they have acquired status the minute they get to the university without being aware or realizing too late that they’re not only merchandise for exhibition, but also consumption. Rape is the most brutal symptom of this major problem.

These men who see their peers as a means to satisfy their needs and exhibit their masculinity will assume positions of authority in the future and will still think that a woman’s role is to serve men as a sexual object, a procreating vessel or a housewife. You may wonder why universities allow such behavior. The answer lies in how power is inherited in the U.S.: fraternity means power. If one investigated the genealogy of fraternity members, one would see the continuity of privilege. And there’s no one as loyal to his university days and his secret circle as a frat boy.