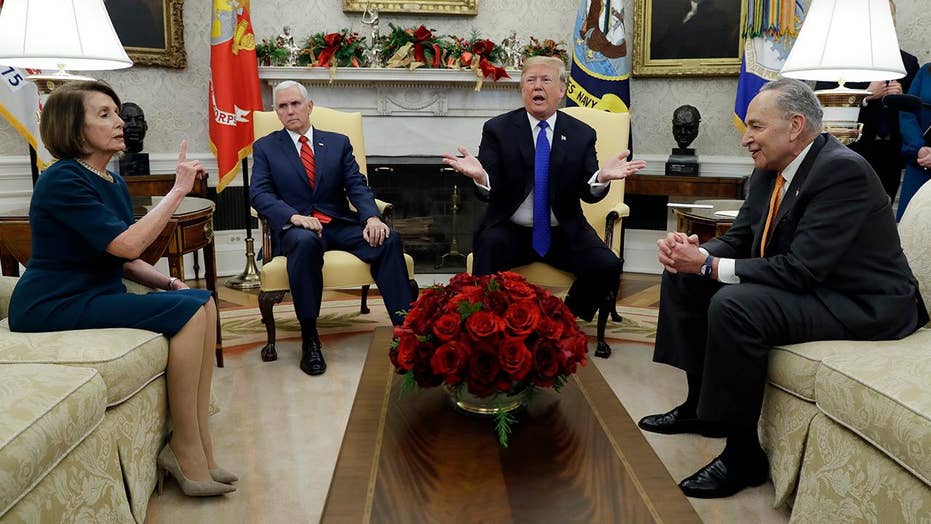 It’s late morning in the U.S., and a couple of minutes ago Americans that were paying attention to the TV saw something unusual: a visit to the White House by Democratic leaders of the House of Representatives and the Senate for a press photo ended in an argument between President Donald Trump and Congress, under the eye (and the silence) of the vice president. In the end, Trump threatened Congress and the world with a shutdown of the government if Congress didn’t give him the money to build the wall along the border with Mexico (the one he promised Mexicans would pay for during his campaign). It’s worth quoting what he said to Chuck Schumer, leader of the Democrats in the Senate: “You know what I’ll say? Yes. If we don’t get what we want, one way or the other, whether it’s through you [Congress] , through a military, through anything you want to call, I will shut down the government… I am proud to shut down the government…”

When this happened, the theme on the front pages of newspapers and on TV news was Brexit – something rare considering that the media only talks about the rest of the world when there is a catastrophe. Commentators on American TV channels find it difficult to explain the details of the process of the United Kingdom’s exit from the European Union (who doesn’t?), but they knew enough to understand that Theresa May withdrew the draft agreement from the British Parliament and launched a new tour of European capitals in order to beg for a concession that could save her face, and that none of that resembled the sovereignty affirmation that Brexit was supposed to be.

If Americans followed British parliamentary news as much as they follow the White House’s, maybe they would have seen another video that perhaps was as extraordinary as the pictures of the argument between Trump and the U.S. Congress. In Parliament, the No. 2 figure in May’s government called on members to vote for the agreement that their boss arranged until the speaker (who belongs to the same party as the minister) noted, “I just very gently say to the chancellor, to whom I have been listening with great care, it’s quite difficult to vote for something if there isn’t a vote.” And he concluded, after hearing members laughing: “I’m really trying to help the right honorable gentleman, but it’s a point that’s so blindingly obvious that I’m surprised I have to state it, but manifestly, I do.”

This double transatlantic episode enables us to unveil an important novelty of the national populist project that won in the UK and in the U.S. in 2016. Brexiters, and then Trump, were allegedly defenders of popular sovereignty, and especially of parliamentary supremacy, in their corresponding countries. However, we see that things are not like that. As soon as difficulties emerge, they don’t position themselves against supranational institutions but rather against the U.S. Congress and the Westminster Parliament. So May went to court to avoid having to submit any agreement with the EU to Parliament, which supports her government, and even though she lost, it was easier for her to eliminate the proposed Brexit voting agreement than it was for her to hear what Parliament had to say. And that’s why Trump threw a tantrum in front of the TV cameras, confronting Congress and threatening to shut down the government or insinuating he will get the army to do what Congress doesn’t want to approve.

Behind this scorn for parliaments, there is an inconvenient fact that national populists have tried to hide behind their rhetoric: their contempt for people and their votes. In fact, national populists only like people in order to come to power. When people change their minds and vote differently, as happened in the elections where May lost her majority or in the recent congressional elections in the U.S., national populists claim that the “true” will of the people is the least convenient to them: the popular will of 2016 is great; the will of 2018, they are too afraid to ask.

This too is something that does not surprise us. In order to win the popular will of 2016, national populists had to promise everything and its opposite: there was going to be a radical change, but no one would feel any difference; it was necessary to run away from a mighty EU, but the EU was on the brink of collapse and the United Kingdom held all the aces in the exit negotiations; they’re going to build a wall in the U.S., but Mexicans will pay for it. Even before people realize these promises are not going to last, reality itself shows that they can’t.

And this tells us a lot about what the next months, and perhaps years, will be like in the U.S. and in the United Kingdom: avoiding reality, running away, seeking others to blame and, if necessary, screaming that they were stabbed in the back. Nothing some history books hadn’t taught us with fewer consequences than having live history classes about how proud democracies fall apart and take with them what little international stability was built after World War II and the fall of the Berlin Wall.