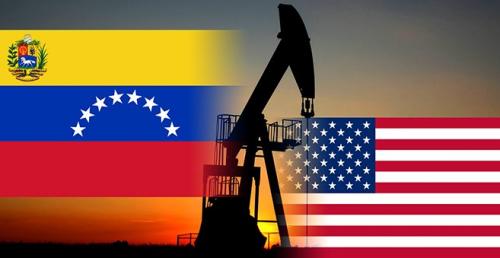 Without heavy Venezuelan oil, which is running out, the United States’ dominance in energy only hangs on by a thread, explains the geo-economist Laurent Horvath.

The curse of oil has once again become apparent. This time, it is Venezuela that bears the cost. The public may have been sold on the image of an incapable and corrupt government, but the invisible part of the iceberg reveals that what is really at stake in dealings with the Latin American country is oil. Currently the responsibility of Russia and China, the harsh necessity of getting one’s hands on the black gold now belongs to the United States.

Even though the U.S. has become the world’s largest producer of oil, the poor quality of its own oil forces it to add Venezuela’s extra heavy crude in order to produce kerosene and diesel. Without this oil, which is running out, the United States’ dominance in energy only hangs on by a thread.

Thanks to shale oil, the United States has become the world’s largest producer of oil. While shale’s light weight works wonderfully for petrochemical products such as pesticides and plastics, it needs to be mixed with a heavier crude oil in order to produce diesel and kerosene. In order to produce these fuels, the country’s refineries import more than 500,000 barrels of extra-heavy crude oil from Venezuela. Canada could help Washington here, but transportation difficulties and the high cost of oil sands from Alberta slow the process down.

In order to avoid shooting itself in the foot with the heavy financial sanctions imposed by the Donald Trump administration on the Nicolas Maduro regime, the United States continues to accept deliveries of crude oil but sends the payments to blocked accounts. The question is who, Caracas or Washington, can hang on the longest.

President Trump’s strategy rests on several pillars: public opinion, the 2020 election and money. Trump lashes out against the downward spiral and the inabilities of a “socialist” government by highlighting the precarious situation of the Venezuelan people and the lack of investors. This message kills two birds with one stone. Domestically, it allows him to face the “openly socialist” Democratic candidates in 2020. Globally, it allows him to divide the world into good and evil.

This perception is reinforced by the sending of humanitarian aid, which has come to resemble a Hollywood press release, when it should be organized in a neutral and independent manner. National Security Advisor John Bolton has reinforced this suspicion of a Trojan horse by flashing a notepad that unveils a plan to send “5,000 troops to Columbia.”

More discreetly, this same Bolton is working on the real goal behind President Maduro’s protégé, Juan Guaido, overthrowing him: oil. The plan would involve Exxon Mobil and Chevron resuming operations at gas facilities in Venezuela and assure that American refineries are able to get what they need. French (Total), British (BP), and Spanish (Repsol) oil companies are also involved in the plan; hence the immediate cooperation of French President Emmanuel Macron and the Prime Ministers Theresa May and Pedro Sanchez.

Single-handedly, Venezuela is in the process of illustrating the current paradox about oil. Cheap oil is running out, and it is becoming more and more onerous to extract a barrel. A member of OPEC, Venezuela potentially possesses the most important oil reserves in the world, and this godsend assures 96 percent of its income. Historically, Venezuela never recovered from the Latin American debt crisis of the 1980s. In the end, the austerity plan imposed by the International Monetary Fund and the World Bank only succeeded in getting the impoverished population to turn against the right-wing president Rafael Caldera.

The liberalism brought by the Americans was supposed to help revitalize the private sector and attract international investors. In an attempt to increase oil production, Caldera privatized it. However, in spite of these efforts, Venezuela hit an oil peak in 1997 with 3.5 million barrels per day. When Hugo Chavez took power in 1999, production had already diminished by 1 million barrels per day and corruption was ravaging the country. Today, with the illusion of sitting on oil wealth, the blame is essentially carried by Chavez and Maduro’s socialist governments.

There is no doubt that casting errors and corruption have damaged the ability to extract the precious liquid. But the majority of Venezuela’s black gold needs enormous quantities of money, advanced techniques and professional management in order to be properly extracted. As long as the price of a barrel was over $100, the country’s budget could be balanced. With the fall of that price in 2008 and again in 2014, Venezuela has experienced the same fate as the Soviet Union in the 1990s.

In the United States, shale oil and Canadian shale sands have seen billions of dollars from foreign investors – such as European pension funds, private banks and the Swiss National Bank – flow in at a loss, but Venezuela has not been so lucky. On the contrary, Caracas has continually had to fight the law and vulture funds of American investments in order to pay back high interest loans. In this financial disaster, from George W. Bush to Barack Obama, Washington has done everything it can to create the current situation.

As such, from 1998 to 2003, Chavez did not understand the importance of investing in the oil industry. He instead diverted money both for his own use and to reduce poverty, which fell from 55 percent to 34 percent. He spent money to educate 1.5 million adults and, with the help of Cuban doctors, to offer free health care to 70 percent of the population. As soon as the price of oil dropped in June 2014, the government found itself short on the money it needed to fund oil production and its social programs. The backlash was instructive, with 3.5 million Venezuelans forced to leave the country in order to eat. In a few years, the country fell into ruin.

In the future, whoever leads Venezuela will inherit a country whose agony will only equal the speed of the fall of its oil production. While the risks for China and Russia add up to the loss of tens of billions of dollars in debts and assets, President Trump must absolutely guarantee that either conventional or extra-heavy crude oil will be imported in order to assure the production of fuels for American trucks and planes.

We often think of small countries as being the most vulnerable to small variations in the oil market. The very uncomfortable position of the United States demonstrates this change in paradigm. We produce more and more oil, of worse and worse quality but at higher and higher prices. This situation is not sustainable in the current economic system. The rate at which Venezuela has fallen apart can only encourage the rest of us to find a way to be independent from oil so as to avoid the same fate.