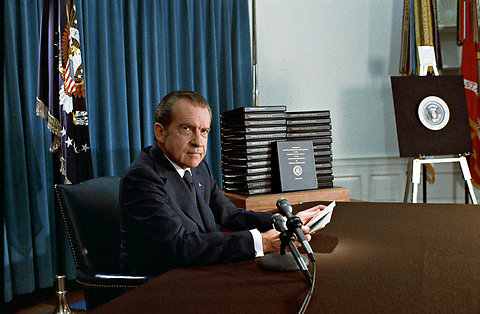 The documentary “Watergate” examines, with newly declassified recordings, the case that made a president of the United States resign for the first time.

At no time during the more than four hour runtime of the documentary “Watergate,” by the two-time Oscar nominee Charles Ferguson, is the name of Donald Trump heard. That is the best decision of the filmmaker, who need not stress that his film is being released at this time to recall the previous term of a liar president who committed several crimes from the White House Oval Office. However, the subtitle of the film, “Or How We Learned to Stop an Out of Control President,” in homage to the original subtitle of “Dr. Strangelove,” as well as the quote that closes the 260 minutes of footage – “Those who cannot remember the past are condemned to repeat it” – do explain the subsequent intention on the part of its creator, and hence its echo at the European premiere of his new work at the Berlinale on Monday, Feb. 11.

Ferguson chronologically reviews in detail the presidency of Richard Nixon with various materials: television images of the time, current interviews with everyone who participated in that process except Henry Kissinger, plus all possible witnesses (senators, congressmen, lawyers, journalists, FBI agents) and the use of the 3,400 hours of recordings made by Nixon in the Oval Office during his five years as president. These recordings are reproduced with actors in a fictional manner. First, the viewer hears a few seconds of the original audio and later sees its recreation. Ferguson assures us the words have not been retouched or altered. There may be no surprises, but it is still shocking to see Nixon say and order such tremendous atrocities.

“Watergate” begins with a review of the events – mainly the Vietnam War – that helped Nixon win the 1968 elections. Even Bob Woodward, who – together with Carl Bernstein – investigated the Watergate scandal for The Washington Post, says in front of the camera that he was a Republican and that he voted for Nixon because he felt he was the only one who would impose order and take the U.S. out of the Asian war. From the beginning, we hear in the recordings a wild, unhinged Nixon, who wants to attack all “those Jews” who ran the main U.S. media; he even posed such crazy ideas as kidnapping the most popular artists and celebrities who opposed his mandate, drugging them and then abandoning them on the border with Mexico. In September 1971, Nixon pressured his assistants to attack the Democrats with whatever means possible. And therein began the domino effect that would end his career.

The initial spigot was removed with the break-in of the Democratic Party’s national headquarters in the Watergate office complex in the early morning of June 17, 1972. The five men who were arrested had worked with or had a relationship with the Committee for the Re-election of the President (CREEP). The investigation was carried out by the FBI, whose associate director, Mark Felt, became the “Deep Throat” who contacted Woodward and Bernstein, the two young Washington Post reporters who also intuited that the money and contacts of the thieves reached back to the White House. That’s why Nixon tried to use the CIA to control the FBI, without success.

However, all this murky news does not prevent Nixon from winning – in fact, sweeping – the presidential election of November 1972. Here begins the second and most entertaining part of the documentary, based more on Nixon’s press conferences, in which are connected the following: the trial regarding the Democratic office break-in; the appointment of an independent investigator who is constantly sabotaged by the White House; the testimony of Nixon’s counselor John Dean, who tells a Senate committee of all the presidential scams; the publication of the list of enemies created by Nixon with more than 200 names of journalists, celebrities, athletes, politicians, associations (including one of Catholic students) and media outlets; and the revelation in June 1973 of the existence of those secret recordings.

Until his resignation in August 1974, Nixon saw the legal and political encirclement tightening around him. But he continued to fight; he even tried to torpedo the process of impeachment (removal), which had been approved by Congress during his time in the Senate. The top persons in his cabinet were falling (some of them appear today in Trump’s organizational chart). Vice President Spiro Agnew resigned, accused of bribery, and even the Republicans faced up to the president, who finally gave up, taking with him both the tapes and the forgiveness of his successor, Gerald Ford. As Woodward summarizes: “Watergate was Nixon’s war against the media, Democrats, justice and finally, history.”*