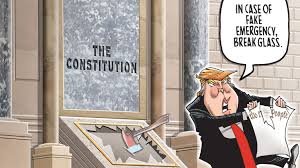 An unprecedented step by President Donald Trump has caused public indignation in the U.S. It will be a highly important test for Congress, and may even give rise to a constitutional crisis.

And there it was – something that not that long ago was considered rather impossible. But Donald Trump has normalized the fact that everything we take for granted when it comes to U.S. policy is being reduced to rubble. Trump declared a state of national emergency in the United States, explaining that it is necessary to allocate about $8 billion to build a wall on the Mexican border — claiming that the U.S. is threatened (in his opinion) by an invasion of immigrants seeking to enter the country illegally from the south. This unprecedented step by Trump has caused public indignation in the U.S. It will be a highly important test for the Congress, and may even give a rise to a constitutional crisis.

Only $1.3 Billion in the Budget

Simultaneously with announcing the national emergency, Trump signed the budget bill which reserves only $1.37 billion to build the wall, because that’s the amount House Democrats agreed to. Signing the budget bill helped avert the threat of another shutdown, i.e., the partial paralysis of the federal government which is caused when there are no funds to cover government employee salaries. Trump – who lost the last round in the fight over the wall by bowing to pressure from the opposition which refused to approve a budget that reserved $5 billion for his cause – lost again, since he could not risk another power play that would result in a new shutdown, something which he took responsibility for last time and which grew increasingly less popular with the public.

Because this concession generated furious protest from right-wing radicals in the “America First” camp, led by Fox News host Sean Hannity, Trump decided to get the money for his favorite toy in a very unorthodox way — by declaring a national emergency.

According to White House lawyers, Trump could have secured more than $ 1.37 billion reserved in the budget without calling a national emergency, but he wanted considerably more and could not get it without declaring a state of emergency. Technically speaking, the president has discretion to declare a national emergency under the powers reserved to him as president.

Does the Situation on the Border Really Call for a National Emergency?

Explaining his decision at the White House on Thursday, Trump reiterated many of the lies he has told in the past: that the absence of a wall, or the presence of merely a steel border fence at the border has enabled drug trafficking on a massive scale, as well as a flood of immigrants entering the country illegally which has caused a drastic spike in the crime rate in America.

Meanwhile, drugs are being smuggled through regularly guarded border crossings, where it is impossible to check every vehicle entering the U.S., and the crime rate among the groups of immigrants entering illegally is much lower in comparison to the national crime rate in America. What’s more, the overall rate of illegal immigration has decreased substantially in the last 15 years. In other words, Trump is simply manufacturing a so-called crisis on the southern border because he has become obsessed with people coming from Latin America, an obsession shared by his base. America’s safety is not threatened by them.

Democratic leaders instantly rejected the declaration of a national emergency. House Speaker Nancy Pelosi and Sen. Charles Schumer announced that they will challenge Trump’s decision in court, accusing him of trying to exceed the scope of power that the Constitution provides him. As the lawyers have reminded us, decisions about government spending are reserved for Congress, not the White House. There will be more lawsuits, similar to the situation two years ago following the famous executive order that banned the citizens of several Muslim countries from entering America. State legislatures are already preparing for litigation. Lawsuits will first be filed and then taken up on appeal by whatever party loses. And, like the travel ban case, this one will also probably have its epilogue in the Supreme Court.

The Supreme Court is now dominated by conservative judges, two of whom were nominated by Trump himself. They ruled in Trump’s favor in the travel ban case, but Trump managed to modify his executive orders ahead of the ruling. Moreover, in the cases in which the president justifies his decisions by arguing they are in the interest of national security, the Supreme Court tends to agree on the basis that these decisions fall within the scope of executive privilege.

What’s interesting is that in 1976, Congress passed a bill regulating when the president could call a national emergency — but the law was not specific about the conditions under which he could do so. As a result, counterintuitively, the national emergency law doesn’t only apply to a situation where the U.S. is subject to an assault or otherwise in a state of war. Accordingly, Trump has a chance of winning the dispute at hand.

What Will Congress Do?

Congress will be in a better position before the court battle begins if it passes a resolution opposing Trump’s national emergency declaration. The Democrats will probably vote unanimously, arguing that the “power over the purse” traditionally belongs to the legislature. There are numerous signs indicating that many Republicans will join the opposition. There is a belief among the GOP that a future Democratic president will take revenge on Trump’s dictatorial urges. Trump will try to veto the resolution if it passes in any case, and it’s not certain whether the House will have enough votes to overrule a presidential veto. Mitch McConnell, the leader of the Republican majority in the Senate, has already said that he approves of the national emergency. In these kinds of situations, the Republicans eventually back Trump, because they fear his base, and because they usually criticize him publicly at the beginning just because it’s appropriate.

It appears that at the end of the day, Trump will win this round. Unfortunately, the loser will be American democracy, something which already alarms the wisest commentators and experts. It is not in America’s interest to disrupt the balance between the executive and legislative powers, especially as the result of a political dispute, where the president is a demagogical liar.

Let’s also remember that even in distant Poland, we could become a victim of this conflict. As he has already said, Trump wants to pay for the wall using various portions of the Pentagon’s budget. As one former congressman observed on CNN, the funds intended to strengthen the eastern flank of NATO may be endangered, among other things.