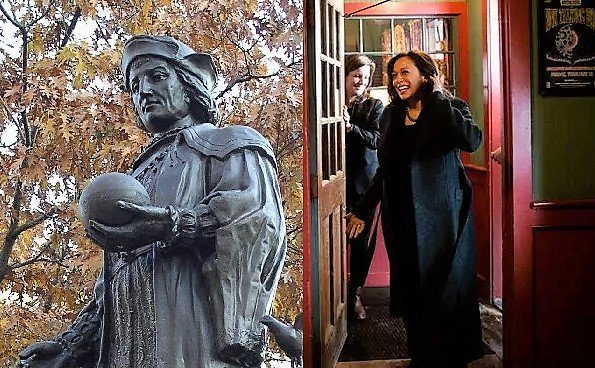 Kamala Harris wants to, or rather should, recover ground lost on the left. She is a Democratic primary candidate, among the favorites for the nomination. By a mere political calculation, this explains her choice to fight alongside a segment of the Democratic donkeys who would like to abolish Columbus Day.

These days, everyone is being towed behind Alexandria Ocasio-Cortez, who was one of the first to raise the issue. She had proposed eliminating the Italian explorer’s holiday from the calendar, replacing it with the day people go out to vote, in other words, Election Day. If this were to become reality, American citizens would be able to miss work on the days of a presidential or state gubernatorial election.

On close examination, Harris is supporting most of the bills introduced by the youngest congresswoman in United States history. From the great environmental plan, also called the “Green New Deal,” to healthcare bills, almost everyone is being led by a 29-year-old. At a conference held in our own Italy, ex-Prime Minister Paolo Gentiloni even made a reference to Ocasio-Cortez’s political development. The internationalism and passion of Italian center-left politicians and leaders of the Western left are no longer news.

Harris, who for now is not being imitated in our own country, is a progressive candidate. She is good for the center but also for the Democratic left. The California senator could be maligned by voters and socialist sympathizers, who in the meantime continue to donate money to Bernie Sanders. The “old lion” from Vermont has reached the $10 million mark. This trend seems to scare Donald Trump, who has begun to attack the 77-year-old senator full-force. The scene is shifting. Given this small bit of information, it is possible to understand the reason for the debate about Oct. 12.

Christopher Columbus has been a real object of political propaganda for some years now. The sailor has also been a victim, in a manner of speaking, of the “statue wars.” Major financial hubs have banned his image because their officials believe it to be identifiable with, perhaps responsible for, the exploitation, abuse and genocide perpetrated against indigenous peoples. Harris is Indian-Jamaican, but “Indian” in the sense that her mother is originally from India. However, this is a good opportunity to give a nod to a minority while casting the line out into a pond of socialist-colored votes, where these petitions are heard the most.

War with the indigenous peoples was a constant during the initial American centuries. At Wounded Knee, to cite one of the best-known historical examples, hundreds of Sioux Indians were killed in barbaric ways, most of them women and children. It was 1890, 400 years after the three ships landed. The government back then wanted to annex those territories.

Columbus has been dead for a while. Yet in coming to terms with the past, the Democrats are doing so through the explorer from Genoa.