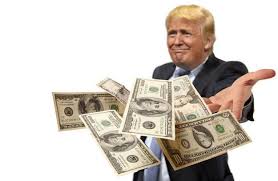 Donald Trump arrived at the White House, promising an aggressive economic policy of tax reduction, which so far has failed resoundingly. The lowering of taxes 14 months ago has sunk revenues and triggered the purchasing of products made outside the United States.

According to the U.S. Department of the Treasury, revenues fell 1.5 percent over the past year, despite the fact that growth during that period rose to 2.9 percent. Adding to that is a deficit that has grown at the alarming rate of 47 percent: $1.87 billion ( €1.66 billion) added to the national debt by Trump in three years.

The U.S. president appears to be incapable of controlling the growth of trade and budget deficits, as well as the national debt. He lowered the tax burden, but he did not cut spending. One of the keys that explains this shipwreck is his gamble at protectionism.

Trump imposed tariffs of 30 percent on imports of solar panels, 25 percent on steel and 10 percent on aluminum, together with tariffs of between 10 and 25 percent for more than 1,000 Chinese products. Nevertheless, the fact that many capital goods are imported has facilitated an increase in demand, which translates into more imports.

Consequently, Trump must correct his erratic politics, based on populism, not only to stop the trade war between the U.S. and China, but to prevent contagion to the global economy,