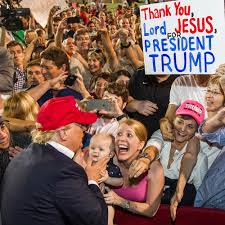 The relationship between Mexico and the United States is unequal, but it has ceased to be completely unfair in several ways. Trade, investment and migration give rise to a dependency that demands care on both sides, but the situation is complicated by the nationalist populism of President Donald Trump. Undoubtedly, Mexico is the weaker party and, for this reason, asserting itself for its own interests is more complicated.

Just because the U.S. government is led by a demagogue in his quest for reelection does not mean that all authorities have to behave the same way. In addition, the economy imposes its own logic, even if the president wants to modify it. Coexistence benefits everyone, especially the U.S. government.

The Mexican president is doing the right thing by not engaging in disputes. For Trump, exculpatory results of the investigation of Special Counsel Robert Mueller represents the beginning of his campaign for reelection.

His inflammatory and provocative anti-Mexican rhetoric hasn’t changed. It worked to win him the Republican nomination and, later, the presidency by a narrow margin and without the popular vote. The path is familiar, and his message is not meant for Mexico, but for his electorate left behind in the current economic system that blames its Mexican neighbor as the source and reason for its misfortune.

It is neither elegant nor wise for the Mexican president to invoke the will of the populace in order to justify his position towards Trump. He does not need to resort to this, although many people would expect a more combative attitude, especially with his natural belligerence towards everything he dislikes: Entrepreneurs, the sissy company, and past governments that are not fighting or arguing.

The president is right not to fight with his U.S. counterpart. It’s best for all to avoid provocation and to understand that the demagogue has gained political capital because of his language and how he treats Mexico and Mexicans.

Nor is the Mexican president mistaken in referring to the need to structurally resolve the cause of illegal migration to the U.S. Developing the region, especially the poorest areas of Mexico and Central America, is the best way to contain migration. The problem is that the northern Mexican border has become a sort of sanctuary for all migrants, not only for Mexicans. It poses a major social challenge that demands global initiative before the problem worsens. What the Mexican government has done in fiscal matters hardly eases the coming problem.

The demagoguery from there should not be answered with demagoguery from here. Trump is a threat to world peace and good neighborliness. He is a provocateur, a bully, and he is opportunistic. He has enough political capital to get away with it, as long as that demagoguery does not disrupt the security and economic interests of the U.S.

Cooperation is fundamental to the security of the continent and the U.S., and for the economic competitiveness of North America. It would be no exaggeration to point out that the viability of the U.S. economy certainly requires illegal migration, less than half of which is of Mexican origin.

But it requires strategy, planning, and intelligence. Mexico can be a logical valve in the management of illegal drug trafficking and migration. Chancellor Marcelo Ebrard understands this, and it is possible the president does, too. Mexican leadership should not engage, and work for an agreement with equal emphasis on investments for development, human rights, global security and rational regulation of migration and drug trafficking.

About Patricia Simoni 103 Articles
I first edited and translated for Watching America from 2009 through 2011, recently returning and rediscovering the pleasure of working with dedicated translators and editors. Latin America is of special interest to me. In the mid-60’s, I was a Peace Corps volunteer in Chile, and later lived for three years in Mexico, in the states of Oaxaca and Michoacán and in Mexico City. During those years, my work included interviewing in anthropology research, teaching at a bilingual school in the federal district, and conducting workshops in home nursing care for disadvantaged inner city women. I earned a BS degree from Wagner College, masters and doctoral degrees from WVU, and was a faculty member of the WVU School of Nursing for 27 years. In that position, I coordinated a two-year federal grant (FIPSE) at WVU for an exchange of nursing students with the University of Guanajuato, Mexico. Presently a retiree, I live in Morgantown, West Virginia, where I enjoy traditional Appalachian fiddling with friends. Working toward the mission of WA, to help those in the U.S. see ourselves as others see us, gives me a sense of purpose.