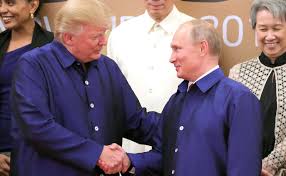 Russia could be the bearer of good news for the American president.

One of the fundamental rules of global politics in the last century was that total war should end in total victory. The winning side could not be satisfied with any other result. It is this world view that led to two world wars, and then to the Cold War. For a significant part of the 20th century, opponents in domestic politics ruled according to “the winner takes all” principle and rarely showed tolerance toward one another. Fortunately, in the modern world, the total victory rule has lost its relevance.

The conflict of the U.S. Democratic Party and the country’s pro-Democratic political-economic elite who oppose Republican Donald Trump, the candidate who unexpectedly won the 2016 presidential election, is, of course, conducted for the sake of achieving victory, drawing attention to itself, and gaining an electoral advantage in the 2020 presidential election. But the aim of this confrontation is not to destroy the opponent, or destroy the foundations of the U.S. political system or undermine the legitimacy of its ruling elite. The main task for the Democrats is to make adjustments to the current system of power relations, to increase options and establish a convenient starting position in the new election campaign. It has, essentially, already begun.

The conclusions of Special Counsel Robert Mueller’s report regarding the results of the two-year investigation into possible Russian interference in the American 2016 presidential election campaign represent a victory for Trump, but clearly not a total victory. The Democrats, who are attempting to attribute their defeat in the election to unexpected and treacherous Russian interference in the U.S. internal political process, expended all their steam on blowing the whistle. The accusations made by Barack Obama in the autumn of 2016, which were then taken up by all key figures of the Democratic Party, have turned out to be unfounded; the Democrats and the pro-Democratic press have been exposed as liars who deliberately employ fake news.

Trump’s victory, which he, as is his tradition, announced on Twitter, will not be a total one. There are a number of reasons for this. First, Mueller’s report will not reduce the intensity of the political struggle in the U.S. The Democrats will no longer be able to attribute their defeat to Russian interference; however, their frustration at the 2016 loss will not subside. The pro-Democrat business elite, which has ridden the process of globalization without thinking about its full effects, cannot find a common language with Trump voters. And we are talking about the tens of millions of supporters from the “Rust Belt” of the U.S., i.e., the old industrial regions suffering from deindustrialization. A significant proportion of the American middle class, which has gained practically nothing from globalization, is also entering the circle of Trump supporters.

Recent New York Times articles show that, for the Times, which is one of the main instruments of the Democrats’ information war against Trump, the special counsel’s conclusions mean nothing. Russian interference in the elections is being replaced by other themes that will be used to pressure the president: the negative relationship with NATO; refusal to criticize Vladimir Putin; softness in the approach to applying economic pressure against Russia; intolerance toward immigrants; corruption in the White House, etc.

Second, this victory has clearly arrived too late for Trump. If the results of the investigation, which are favorable for Trump, had been discovered at the beginning of his presidential term, let’s say, in the second half of 2017, then Russian-American relations would have developed along a different, more positive trajectory. The publication of a similar report in the second half of 2020, on the eve of the next U.S. presidential election, would allow Trump to transform a political victory into an electoral advantage over the Democrats. However, the publication of the report at this moment in time, in the middle of his presidential term, can give the Republicans only a sense of moral satisfaction. The political consequences of this move will be minimal, and this victory will soon be forgotten.

Third, the current victory, of course, allows us to destroy the myth, one heavily supported by the Democratic Party and large pro-Democratic business, that Trump is not here to stay and that his presidency is an illogical zigzag in America’s political history. Nevertheless, the destruction of the myth about Trump’s collusion with Russia will lead his congressional opponents to deploy a campaign against him in some other sphere. Democrats need to come up with something more enlightening, something substantiated by facts, in their criticism of Trump. And he, in response, needs to develop a new argument in the confrontation with his opponents. The old war front will be replaced with a new one. This is good news for Russia, but not so much for Trump.

Russia could become one of the few beneficiaries of the Mueller report. There is a window of opportunity in Russian-American relations for a way out of the current crisis and a return to constructive dialogue. Now, nothing is stopping Trump from announcing his readiness to start preparing for the long-overdue summit with Putin. But Trump’s opponents, of whom there are many in his administration especially in the State Department and the Pentagon, need to organize some new kind of provocation, and to repeating the example set by the November 2018 Ukrainian provocation in the Kerch Strait, which turned out to be quite effective. Back then, this led to a break at the summit in Argentina.

Hard times are coming for Trump. The upturn of the U.S. financial market, which lasted for six months, came to a halt in the fall of 2018. The rapid growth of the American economy has stopped, as the effects of tax incentives and the increase in budget spending have dried up due to the increase in domestic debt. The multiple trade wars that Washington is carrying out with both its allies and its opponents with equal amounts of passion are cooling the economic growth further still. Economic stagnation and a rise in unemployment are on the horizon.

Therefore, Trump urgently needs good news from the sphere of international politics. In the last few months, Russia has repeatedly said that we do not have entrenched differences with Washington; we are ready to work constructively. Against the background of the failure of American peacekeeping on the Korean Peninsula and the spiral of confrontation with China, it is Russia that may be the bearer of good news for Trump. The main thing is for Russian diplomats to fulfill their duties professionally, and to see that critics of rapprochement with Moscow in Washington do not succeed in carrying out some kind of further provocation.