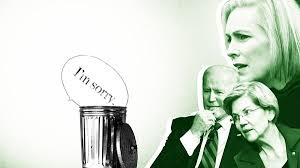 Apologizing for unwelcome behavior seems to be a prerequisite when launching a run for the White House, observes our columnist.

“I’m sorry.” While the 2020 presidential election flock grows bigger than ever – 18 Democratic candidates already, including six women! – we’ve been witnessing a curious succession of apologies. Amid controversy surrounding her Native American heritage, Sen. Elizabeth Warren had to apologize for taking a DNA test. Kamala Harris, looking to improve her image, apologized for her harshness as a Californian prosecutor, and Kirsten Gillibrand admitted having held anti-immigration views which “weren’t empathetic and they were not kind.”

The very independent Bernie Sanders had to issue his own mea culpa for not being vigilant enough in 2016 when he attempted to steal the spotlight from Hillary Clinton: some women from his campaign team have complained about the manner in which they were treated. As for Beto O’Rourke, some unfortunate clichés he has used in regard to women have caught up with him.

Joe Biden has also had to apologize. Barack Obama’s former vice-president is favored in the polls even though he has not yet declared himself a candidate. His star is fading, though. Caught up by the #MeToo movement, he’s had to express regret for the role he played in the Anita Hill affair. She testified before the Senate in 1991 against then judge Clarence Thomas whom she accused of sexual harassment. But despite it all, he was confirmed as justice to the Supreme Court. At the time, Biden was chairman of the Senate Judiciary Committee, and he presided over the hearings. In November 2017, he was forced to apologize for having allowed senators to verbally attack Anita Hill. Some of them went so far as to accuse her of “erotomania.”

But that’s not all. Through a statement he delivered last Sunday, the very tactile Democrat had to defend himself, primarily for having made unwelcome gestures toward a woman who particularly criticized him for a peculiar kiss on her hair at a campaign meeting in 2014. But this time, Biden wasn’t apologizing. Well, not really. “Not once – never – did I believe I acted inappropriately. If it is suggested I did so, I will listen respectfully. But it was never my intention.” Since then, things have snowballed. No fewer than six women have now accused Biden of intrusive – though not sexually aggressive – behavior.

This parade of apologies seems to be part of the package for any “perfect not-so-perfect little Democratic candidate” in the 2020 presidential election. But some are faring better than others. Biden is under fire although he has not even declared himself in the running yet. On Wednesday, he attempted to defuse the situation with a short video in which he explained his tactile behavior and promised to be more mindful from now on. The White House had already seized on the story, with Donald Trump’s counselor, Kellyanne Conway, calling it a “big problem.”

Well, but hang on. What did she say in 2016 when Trump the candidate said he could do whatever he wanted with women, including “grabbing” them by their intimate body parts? Not a lot. Sensing trouble at the time, Trump wound up apologizing and making his excuses. In a video message, he read: “Anyone who knows me, knows these words don’t reflect who I am. I said it, it was wrong, and I apologize.” This rare act of contrition, however, quickly gave way to attacks. “I’ve said some foolish things, but there is a big difference between words and actions. Bill Clinton has actually abused women,” he stated. Since then Trump has faced other accusations, without ever reviving his little parade of apologies.